Dead Or Alive 6 Changed Because Sexual Imagery Is Less Acceptable Than It Was, Says Shimbori

Producer and director Yohei Shimbori recently spoke with Polygon’s Colin Campbell about how times have changed regarding the acceptance of sexual imagery. He mentioned that they had to change, too.

The article was published on January 22nd, 2019 over on Polygon, where Campbell seems to question the contradictory nature of some of Shimbori’s interviews and the promotional ads for Dead or Alive 6, saying via tweet that “Dead or Alive 6’s wokeness looks like marketing voodoo”.

This is likely because there’s been a mixed message about what Dead or Alive 6 is supposed to be. When asked about the excess of sexualization in the game series, Shimbori told Polygon…

“There have been a lot of changes in the world in recent years, and I decided that we should reflect those changes by resetting our approach to sexual imagery, after Dead or Alive 5,

“It’s given us an opportunity to focus on other aspects of the characters’ design, which helps us to think clearly about what we want to do to attract new players, while keeping our fans happy. […]

“[…] We had a lot of meetings to talk about these changes. Sexual imagery has been a part of the series’ image and its marketing, but things change. That kind of imagery is less acceptable than it was, and can even mean that some media outlets don’t want to show those images. So we changed. […]

“[…] I know some fans will not be happy, but I think most people will be fine, and I think it will be better for new fans. I’m not personally unhappy about making these changes. It’s important to be able to react to changes in the world.”

Campbell wasn’t entirely convinced, though. And you know something is wrong if a Polygon writer isn’t willing to buy into the promotional platitudes for “wokeness”, hence him calling it “voodoo”.

The opening paragraph in the Polygon piece called Dead or Alive 6 “business as usual”, referring to the sexy imagery of the characters, as Campbell didn’t seem entirely convinced that the game had completely altered its identity the way Shimbori had led on.

Campbell doesn’t negatively criticize the game, but he does seem to point out that things still look very much like the classic Dead or Alive series that fans have grown attached to.

The Polygon writer doesn’t explicate his intentions by questioning Shimbori’s words. Instead he juxtaposes the producer’s statements with some striking imagery of characters like Nyotengu in a zipped-down PVC suit with wings. The image greatly contrasts Shimbori’s statements about that kind of imagery being “less acceptable”. 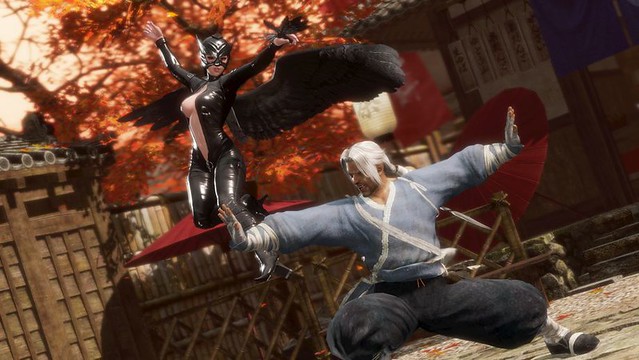 In a way, this little wink, wink, nudge, nudge from Campbell toward the contradictory nature of the marketing material versus what’s being said in the interviews seems to be the Polygon writer taking note of what’s been par the course for Dead or Alive 6’s road to release since being revealed last summer.

What Shimbori told Polygon was obviously lip-service to placate Western media. Those who speak Japanese are oftentimes told something almost completely different; usually that the game will retain its sexiness and to “trust” Shimbori and Team Ninja.

This was perfectly encapsulated in the full Twinfinite interview where Shimbori said that the reduction in the costume break feature compared to Dead or Alive 5: Last Round was to make sure there were no problems getting the game released, and that they would slowly add in more of the fan-service over time.

Psst: this is in the game. pic.twitter.com/jfh6MiDPwn 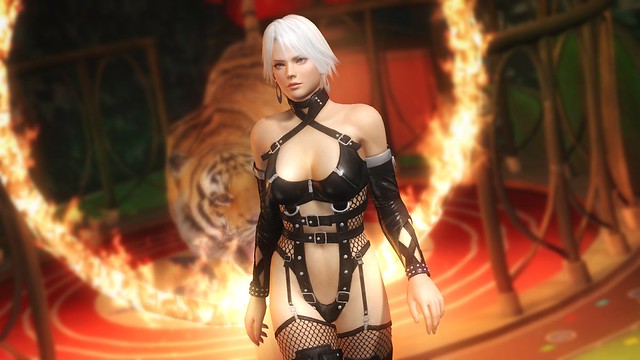 In the interview it was also mentioned that there were various super sexy outfits in the game that haven’t been showcased in the marketing material yet to prevent the outrage machine from kicking into play. Apparently this decision was deliberate because Shimbori told Twinfinite…

“Of course. I’d like the fan to enjoy that, but please don’t talk too loudly about it. The more attention this draws, the less I can do it. If you really want to have nice costumes, please quietly enjoy them so we can keep making them.”

So the game does retain some element of having super sexy outfits, only it’s tucked away inside certain costumes for certain characters.

The problem, however, is that the facade being put on for the media to pretend as if the game is trying to come up to par for the “#MeToo era”, as the New York Post put it, has left a lot of core fans confused and feeling dejected.

The team working on Soul Calibur VI did the complete opposite, focusing entirely on what would be in the game, the extent of the fan-service, and how far they were willing to take the costume break. Even with Kotaku trying to slut-shame the virtual vixens within Soul Calibur, they stuck to their guns and were rewarded with customer loyalty and solid sales. This was even brought up in the Twinfinite interview, where Shimbori was asked why was it that Soul Calibur VI could get away with a more robust costume break but not Dead or Alive? Shimbori responded by saying…

“The reason why they can get away it is one one of the big mysteries of the world. SoulCalibur can do it and doesn’t get a beating over it, but even when Dead or Alive doesn’t do it, it still gets criticized.

“If anyone can tell me why this happens, and how to fix it, please introduce them to me [laughs].

“Again, if people talk too much about it, others will come in and bash it. So just enjoy it and please trust me. I’ll make a nice game that the fans will be happy about.”

What Shimbori is referring to about people talking “too much about” the fan-service, is that SJW media outlets will target the game and run it into the ground like they did with Dead or Alive Xtreme 3.

Gamers may like fan-service, but the media hates it.

This has led to Shimbori attempting palaver for the promotion of the game; telling the media outlets one thing but then doubling back and saying something else when he talks to fans.

However, the so-called facade put on for the media looks less like a show and more like Shimbori’s true intent when old interviews from 2018 surface where he rails on fan-service and certain kinds of content in Dead or Alive, such as the OMG Mode, where he told DualShockers they had no plans to include it.

That’s not to mention that Shimbori has repeatedly said that games like Dead or Alive Xtreme 3 took fan-service “too far”, and that they completely removed the gameplay option for OMG Mode because it was “too exaggerated”.

But is that more of a “mistranslation” where gamers are “misunderstood”? Or is that something he genuinely believes?

What’s more is that gamers are still confused as to what will be in the game and what won’t. I guess everyone will find out when March gets here.

(Thanks for the news tip Richard Pell)