Some of you may have noticed that in recent years Eurogamer has been inclined to push certain political agendas over others, typically those that are Left-leaning. Some gamers called them out about it, but Eurogamer promptly told them “no”, they would not stop being political activists posing as games journalists.

It started with Eurogamer supporting H.BomberGuy’s Twitch stream for the Mermaids trans-activist group that tries to encourage kids to become transgender.

A user going by the handle of Andree Barreiro tweeted at Eurogamer, asking them if they could just stick to video games and stop being political activists. They responded by saying, “No, sorry”.

Before that, Eurogamer made a tweet stating “5 Apes Face A World of Trans Rights (Make That 8 Worlds.), with an image of Donkey Kong 64 and the accompanying test from the tweet stating “We’re all proud of you @Hbomberguy”. 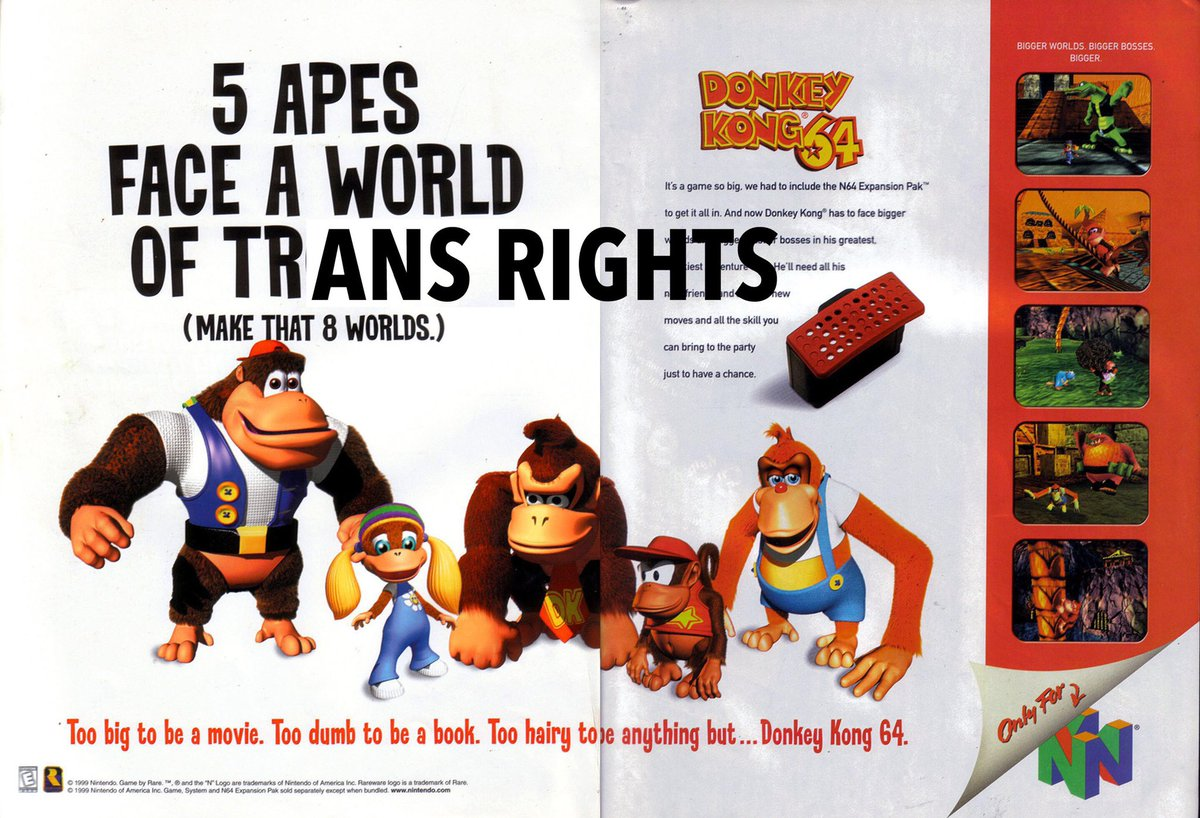 The article published on January 21st, 2019 was entirely glowing of the Twitch stream, praising H.Bomberguy’s efforts to forfeit sleep in order to play through the game and raise money for the Mermaids organization.

There was opposition to Mermaids from writer and comedian Graham Linehan, who claimed that Mermaids was using its influence to coax kids into transgender surgery and hormonal therapy at young ages before they fully understand what’s going on. Linehan was backed up by feminist groups and angry mothers who also didn’t want Mermaids to receive a £500,000 lottery grant from the U.K’s National Lottery.

The money was actually put on hold while the National Lottery conducted an investigation into Mermaids to see if they were truly a politically motivated group, which would disqualify them from receiving the grant.

H.BomberGuy decided to step in while deliberations were being made and raised $340,000 for Mermaids.

Eurogamer’s article was almost entirely one-sided in support of H.BomberGuy and Mermaids, failing to disclose the actual concerns raised by mothers, feminists, and Graham Linehan.

But that isn’t the first time that Eurogamer has been caught pushing the Social Justice agenda.

Back in August of 2018, the outlet peppered CD Projekt Red about gay sex and gender-fluidity in Cyberpunk 2077.

Just a week before that both Eurogamer and PC Gamer beseeched Valve to start censoring their Steam communities.

Back in October of 2016 Eurogamer also censored their own community from discussing the Crash Override Network leaks, which revealed that Zoe Quinn and others engaged in harassment and doxing of #GamerGate supporters.

There have been a number of other instances of Eurogamer diving into the Social Justice trenches, oftentimes siding with those on the extreme Left, and against normal gamers who just want to enjoy their hobby. For instance, during #GamerGate, Eurogamer came out and sided against gamers, penning an editorial on August 8th, 2014 titled “Why We Need More Developers Like Zoe Quinn”.

On October 17th, 2014, Oli Welsh penned another editorial, explicitly telling gamers NOT to support #GamerGate and a call for better ethics in journalism, writing…

“Let’s keep talking about how games matter, but let’s turn our back on the term GamerGate and all the hate and exclusion it has come to stand for. We hope this is the last time we’ll ever have to use it on this site. Let’s have GG mean “good game” again.”

This is despite the fact that neither the FBI nor the feminist group Women Action Media! could find evidence supporting the multiple, fact-free claims from media outlets that #GamerGate was a harassment campaign.

Eurogamer has consistently come down on the opposite side of the typical core gamer, finding captious reasons to criticize gamers, and supporting disruptive harassers like Anita Sarkeesian who openly berated her arch-nemesis Sargon of Akkad in a public space, right in front of a live audience.

Eurogamer never renounced Sarkeesian’s divisive politics, nor walked back their support of people who have done nothing but damage the industry. Instead, they continue to truck on, pushing Leftist politics and creating even more division and resentment among the hardcore demographic.

As noted in the tweet at the top of the article, even when gamers beg and plead for them to step away from the high-octane sociopolitical activism and get back to being gaming journalists, Eurogamer responded with a resounding “No”.

(Thanks for the news tip QuantumSuicider)