An Overwatch player named “Ellie” was signed to a team called Second Wind back in late December of 2018, which is part of the Overwatch Contenders league. The player had no surname and no other details revealed about them other than that “Ellie” was purportedly a female. After signing with the team and not having any details about her revealed, many viewers, streamers, and gamers questioned Ellie’s legitimacy and whether she was actually a he. Ellie abruptly quit the Second Wind team, which blamed harassment and social pressure for Ellie’s quick exit. But it turns out that the real reason Ellie quit was because she was actually a guy who goes by the handle of Punisher, an Overwatch player with moderately high skills, and he had taken everyone on a ruse cruise for the purpose of conducting a “social experiment”.

The real kicker is that before this information came to light — about Ellie actually being a male — outrage-outlets pushing the Leftist agenda, like Kotaku, decided to publish fake news about gender essentialism in e-sports keeping women from playing games, and the woes of the woman who dares to game.

The article went live back on January 3rd, 2019 before author Nathan Grayson could even confirm if Ellie was actually a female.

Grayson wrote – as if compelled by some passionate burning down below – about how gaming is such an evil place for women, which is why Ellie had to quit…

“Kotaku reached out to both Second Wind and Ellie for further details, but as of publishing, they have yet to reply. Last night, a message from Second Wind’s Twitter account chalked up her departure as being due to ‘unforeseen reactions.’ Shortly after, Second Wind owner Justin Hughes clarified the situation, saying that Ellie was feeling tremendous pressure from multiple directions. […]

“Esports is not a meritocracy; it’s a male-dominated scene in which gender essentialism runs rampant, and in which women are often made to feel unwelcome. Even in a game as ostensibly inclusive as Overwatch, a woman can’t just be ‘a player’—not without ample infrastructural support from an understanding team—and Ellie’s situation exemplifies why. This situation has led some fans to question what Second Wind did to help Ellie before she left and why the team didn’t publicly decry the harassment she was enduring before her departure. On Twitter, Hughes replied that ‘we do what we can for our players, but when it comes down to it, there are only so many things we can do when safety of a player comes into question.’”

Now to Grayson’s credit he did reach out to the involved parties, but to his detriment he didn’t exercise any sort of critical scrutiny raised by Ellie’s detractors: namely that Ellie was possibly a man and that something was not right with the account.

Instead the Kotaku community labeled the critics as “sexists” and “harassers”.

Grayson opted out of employing skepticism and fishing for details, opposite of the gamers who smelled smoke where there was eventually a fire. He even went as far as to say that the people who questioned Ellie’s identity were “conspiracy theorists”…

“Ellie’s departure from the team has garnered a wide range of responses from the Overwatch esports community. One Overwatch League player, Luís “Greyy” Perestrelo of Paris Eternal, reacted by tweeting “xd” a playful emoticon that implied he was making light of the situation, but he later apologized. Other responses were more celebratory and continued to perpetuate conspiracy theories about Ellie’s identity.”

Grayson essentially used Kotaku – a platform that reaches more than 30 million visitors a month – as a conduit to preach his Leftist politics to readers.

Like clockwork, the comment thread jumped onto Grayson’s words like two-faced male feminists jumping into thot-streams ripe with ample cleavage, as they began wrongly accusing the gaming community of being “sexist”, “misogynistic”, and “entitled”. 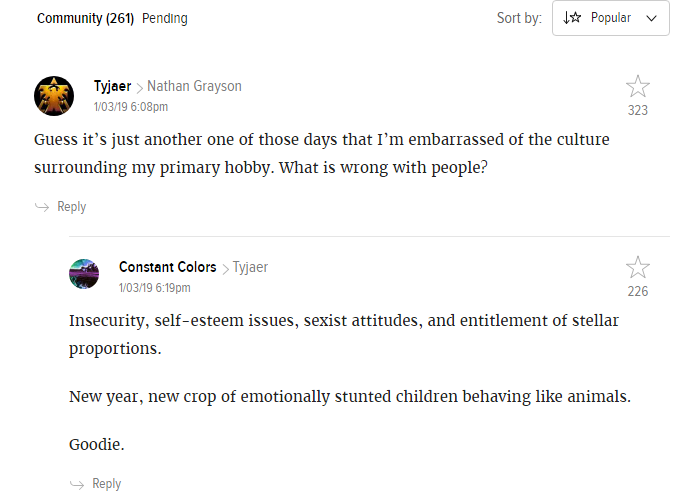 Little did they know that they had been taken on a trip around the Fake News canal, courtesy of the bamboozle cruise.

Because it turns out that it’s all fake news.

“She” was just part of a “social experiment” cooked up by the Overwatch player Punisher.

This was first revealed via a Twitch stream from C9 Aspen on January 4th, 2019.

Watch C9 Aspen | aspenoAYAYA IN THE CHAT from Aspen on www.twitch.tv

After Aspen revealed that Ellie wasn’t real, and went on a tirade about how much the gaming community sucks for its ill-treatment of women, e-sport analyst and consultant, Rod Breslau, dug deeper and found out that Punisher had basically convinced a 17-year-old girl to pretend to be Ellie on his smurf account.

Punisher, the player assumed to have played as Ellie, is just another NA ladder player. Not a pro smurf or semipro. It is also possible more than one person played under her name.

Correction: The meeting between Blizzard and SW has not yet occurred, will happen in the next hour.

Unlike Grayson, Breslau decided to dig deep and find out exactly how this all transpired, including garnering the receipts that Ellie really was a man who was attempting to cajole other females into joining in on his “social experiment” using smurf accounts.

I have received screenshots of Punisher in a private message conversation with a woman Overwatch player ‘Catsui’, who was not aware of this incident until recently. Punisher, seen in a Battlenet conversation under Ellie, uses his ‘egirl smurf’ to grief OWL and other top players. pic.twitter.com/K1Tb2PFVLL

If you’re unable to view the images in the tweet, you can view the larger images below. 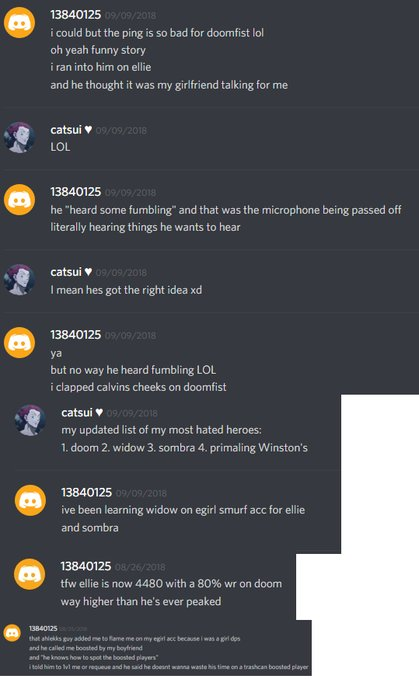 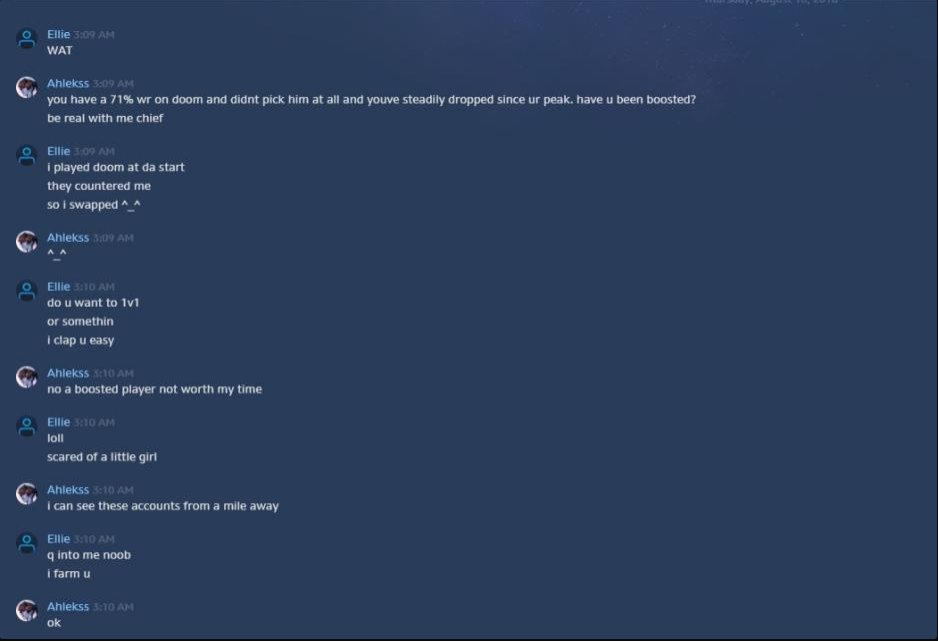 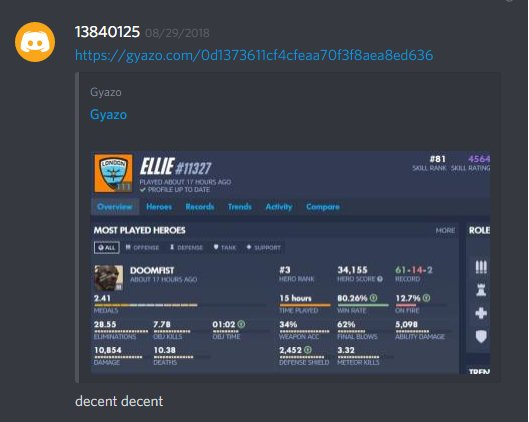 The chat logs show Punisher trying to recruit other females to his cause, as noted by Breslau.

And by ‘social experiment’ I mean ‘be a conniving asshole’

The real story here isn’t that Ellie was a fake player used by another male player for a “social experiment”, it was that major enthusiast news outlets were intent on using Ellie – much in the same way as they intended to use female Korean player, Geguri, – for their Social Justice Warrior campaigns to denigrate gaming.

Grayson didn’t even know if Ellie was a real person, had no facts on the real identity of the player, and couldn’t even confirm if Ellie was actually a “she”. Instead, he used the platform to condemn gamers based on the presupposition that the gaming community is naturally “toxic”.

This even resulted in more brand name outlets like The Mirror and ComicBook.com mirrored Kotaku’s fake news, further pushing misinformation into the mainstream. There’s a pastebin of more than two dozen other websites who all published misinformation and fake news regarding this Ellie debacle, including but not limited to Game Informer, SyFy, PC Games Insider, and Dot Esports.

After the news circulated that game journalists were actually the ones who had been bamboozled, Grayson decided to update the article at 10:30pm on January 4th, 2019, informing readers after the fact that Ellie was, indeed, not real. 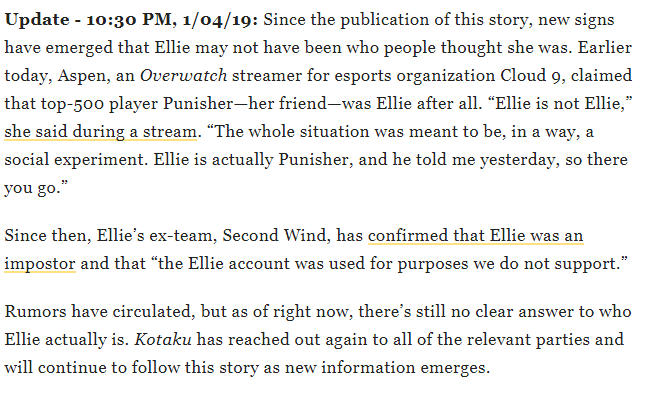 #GamerGate was right all along.

(Thanks for the news tips Blaugast and Lyle)