Gillette’s New Ad Gets Woke; SJWs Come Out In Support Of The Feminist Propaganda

Gillette dropped a new ad for men, which is a near two minute short titled “We Believe: The Best Men Can Be”, which is essentially third-wave feminist propaganda aimed at the Social Justice Warrior crowd, which means it’s not aimed at any normal American man.

The ad was actually uploaded multiple times across Gillette’s YouTube channel on January 13th, 2019, with various unlisted versions that all have been downvoted into the dirt. You can watch the agitprop below, which was obviously put together by a marketing firm that hates men, America, and masculinity.

The ad was rightly downvoted into oblivion, as no one is as stupid as Gillette thinks they are. The virtue signaling in the description was also a dead giveaway that the company – that’s supposed to be designing products for men – is being operated by feminists.

“Bullying. Harassment. Is this the best a man can get? It’s only by challenging ourselves to do more, that we can get closer to our best. To say the right thing, to act the right way. We are taking action at http://www.thebestmencanbe.org. Join us.”

Even though they tried to hide the other videos as unlisted and garner a few upvotes, it still didn’t work. The other unlisted video, entitled “We Believe”, still got downvoted into oblivion.

Gillette is learning fast that you can’t hide from the truth, and the truth is that American men have become tired of this anti-male propaganda pushed by anti-American Leftists controlling nearly every aspect of our media.

The only thing Gillette had to do was put out a video showing that their razors cut hairs. That’s it. If they can’t do that then they need to get out of the men’s hygiene business and go focus on making commercials advertising feminist literature, since that seems to be what they read in their pastime when they aren’t trying to subvert men with the exact kind of bullcrap that every single red-blooded, American male has been trying to get away from since Social Justice Warriors have corrupted nearly every single corner of our waking lives in every single aspect of the entertainment medium with the most obnoxious, rage-inducing nonsense since shaking hips on national television was declared haram back in the 1950s, as noted by Zoomer Radio.

And before you no-good-disloyal Centrists™ come in with your “It’s not propaganda, it’s just someone who doesn’t know what they’re doing” bullcrap, let me cite a source to put your lousy, two-faced, fence-sitting behinds in place like the near-shill-wells that you are. According to AdAge this was explicitly produced as part of a social engineering initiative to get more female directors into the ad business, even when the ads are supposed to be for men. The AdAge article states…

“Director of the [Gillette] spot is Kim Gehrig, who was selected via P&G’s partnership with Free the Bid, a program that launched in 2016 that aims to get more female directors on ads. P&G began getting involed with the effort last year.

“Gillette’s is the latest in a series of new work ads for men’s personal-care brands over the past year or so taking an evolved outlook on masculinity, ranging from Combe’s Just For Men to competitors such as Unilever’s Axe and Edgewell Personal Care’s Schick.”

Gillette’s not-so-thinly-veiled propaganda piece takes a different approach to trying to overhaul cultural norms, basically pushing the idea that even looking at a woman, or being attracted to her is verboten.

A completely false scenario is presented at one point in the short where a black man stops a white man from pursuing a hot young chick wearing short-shorts and filling out her outfit in all the right places. The insinuation is that a man shouldn’t even consider approaching a hot young woman if he finds her attractive.

Why the heck not?

Is Gillette trying to tell men that pursuing an attractive woman is wrong? Are they trying to push men away from thinking hot women are hot? Is this their poorly constructed attempt to say that acting on the biological foundations of heterosexuality is wrong? Is this Gillette trying to indicate that they DON’T want men and women to together?

Thankfully, majority of men seem to see through the bullcrap that Gillette is pulling and called their nonsense out in the comment section for being the dillweeds that they are. 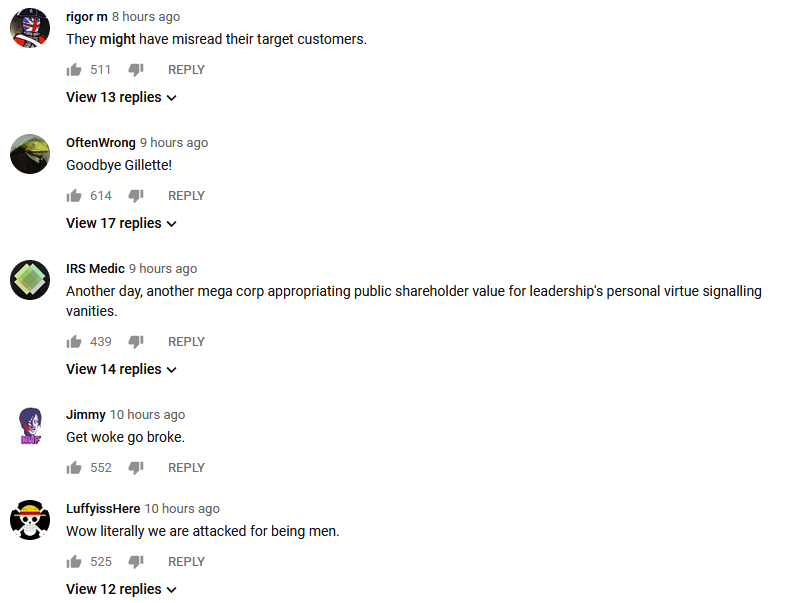 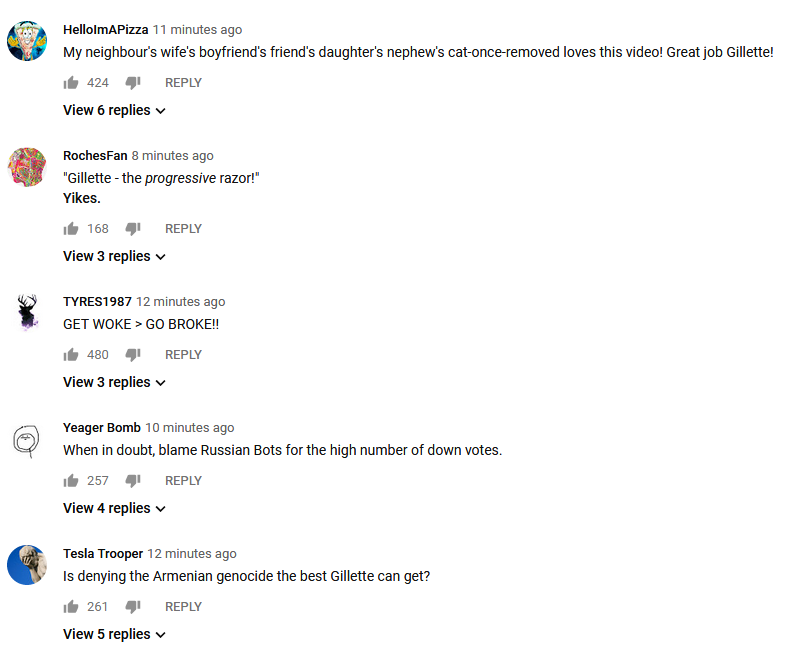 Yaeger Bomb probably isn’t wrong. Expect Gillette to respond with a PR-safe message about being attacked by “Russian bots”, “misogynists”, and “Trump supporters”. And if that fails, pull out the ‘ole “It was the #GamerGators!” routine.

As is typical of Left-wing propaganda making its way into the mainstream conscious, there are a bunch of Social Justice Warriors with hipster glasses, triangle jawlines, and hipster haircuts praising Gillette for its pro-feminist, anti-male agitation.

Lotta fragile bros in this thread only proving it right. SMH.

Also, this advert is quite specific about the at behaviours it targets: such as sexual harassment, bullying and physical violence

If you view any of those things as ‘OK’ or just ‘part of being a man’ then again, see my previous comment about being part of the problem!#Gillette

Y’all aren’t getting it. #Gillette isn’t saying ALL men are like this. They even show examples of good men stepping in and behaving like good role models. Anyone who is taking this as a “personal” attack on ALL men needs to rewatch the ad or check themself.

@Gillette who ever is responsible for your new ad regarding toxic masculinity is amazing! Hands down the best ad I’ve seen in a long time. Hats off to #gillette

Imagine thinking a challenge issued to you to step up and help heal the problems you caused is an “insult” 🙄 https://t.co/Q8uYHMkMKt

Reasons on why #Gillette isn’t worried about 4Chan brigading its new ads:
1) The Last Jedi outsold Infinity War in home video
2) Nike is selling stronger than expected
3) 40% of internet activity is bots
4)”Get Woke go broke” is bullshit

“Get woke; Go broke” is one of the most concrete examples of businesses deciding to choose virtue signaling over capitalism, and honey we’ve got a whole master list of companies who got woke and went broke.

Even various political outlets have chimed in, with places like The Hill not doing one iota to countermand the very obviously biased ad, which leans so far Left that if it were the tower in Pisa it would be touching the ground by now.

Obviously other Leftist websites like The Wall Street Journal and The Today Show, joined in on promoting the feminist propaganda, even though it’s real rich coming from The Today Show when their very own Matt Lauer was apparently a #MeToo perpetrator, which means their opinion regarding “toxic masculinity” is worth about as much as Richard Simmons’ dick in a women’s prison.

Thankfully, there are real men out there standing up to this feminist takeover of male hygienic products, laying down the truth-sauce and firing back like drone strikes on Pakistani civilians.

So nice to see @Gillette jumping on the “men are horrible” campaign permeating mainstream media and Hollywood entertainment. I for one will never use your product again. https://t.co/uZf7v4sFKm

#Gillette new marketing strategy is pandering to women that don’t shave. Bold move, Cotton, let’s see how this one plays out. https://t.co/WsyrU8LfAk

@Gillette has made it clear they do not want the business of masculine men.

I will grant their wish.

I have used #Gillette razors since they sent me a free sample on my 18th birthday, and will no longer buy any of their products.

My personal favorite was from the Twitter account Any Dad In America, who wins an internet for the day.

When will #Gillette do a Venus razors commercial on the these teachers raping boys & #ToxicFemininity? #TheBestMenCanBe pic.twitter.com/iTjhiUuCSk

Funnily enough, someone on the Gillette hashtag linked to the old DollarShaveClub.com ad from back in 2012, which shows how a real ad is put together for real men. Check it out below to have some semblance of sanity and testosterone restored for the sake of your well-being.

As for Gillette, it’s obvious that much like LucasFilm, the Marvel comic brand, DC Comics, Electronic Arts, Blizzard Entertainment, and BioWare, they are far more interested in virtue signaling than providing a product that consumers are interested in buying for its quality. So with that being said, Gillette has officially put themselves on watch for getting woke and setting themselves up to go broke.

(Thanks for the news tip monzaemon92)