Some of you may have been keeping track of the censorship that has plagued the Chinese and English versions of Girls’ Frontline. However, there is hope for everyone out there who have been clubbed over the head with the baton of censorship in recent times for a number of games, including Girls’ Frontline.

Readers informed One Angry Gamer that in the latest English update from Sunborn Games, there’s a new recipe for T-Doll Production. If you put 522 Manpower, 320 Ammunition, 404 Rations, and 137 Parts into the production pipeline you’ll be able to uncensor the artwork in the game once you exit and restart.

You should receive a prompt asking you to download a patch the next time you enter the game, and if you choose to do so it will install the original artists’ assets without any of the post-release censorship. Now you can witness your waifus in all their lewd glory. 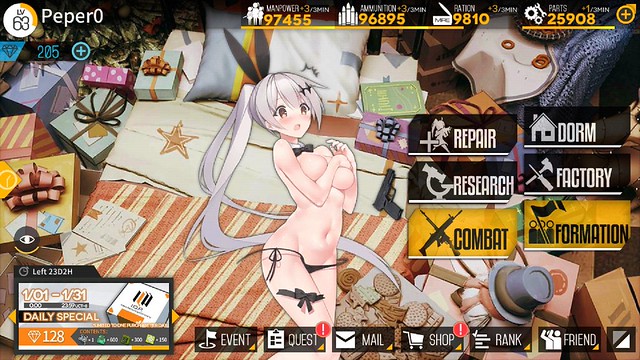 As noted by a user who reached out to us via e-mail, it means you no longer have to use the Girls’ Frontline nude mod or other roundabout methods to access the uncensored content… so long as you’re not in Taiwan or China, where the Chinese government cracked down on the sexy-time patch…

“Similar Decensor Recipes were present on the Chinese and Taiwanese releases of the game until being removed at the request of Chinese government officials. The recipe was not officially announced through the English language social media channels, instead quietly disseminated through non-official channels and fan groups.”

After having various outfits censored over time, gamers are already rejoicing over the new recipe featuring the unlocked uncensored content. There are Twitter threads sharing the images of the girls in all their uncensored glory.

You can make use of the production recipe right now if you have the English language version of Girls’ Frontline.

However, you might want to work fast and make prime use of the recipe before some screechers, howlers, agitators, and prowlers catch wind of the recipe and force the developers to remove it and censor the game again.

(Thanks for the news tip GFUncensor)