DC Comics’ Harley Quinn: Who Let The Cats out dropped and it isn’t going over well with fans at all. Mark Russell, Mirka Andolfo, and Arif Prianto’s newest entry in Harley’s solo adventures sees the anti-villain taking on male pet shop owners in her local neighborhood. Typically, the men – portrayed as angry white men – are the villains in the story.

There’s a quick review of some of the relevant parts of the comic from YouTuber YellowFlash 2. He covers some of the mockery and jokes from the comic in a 10 minute video, which you can check out below.

The gist of the comic is that there are too many cats in Harley’s apartment and they’re flaring up her allergies, so she decides to give them away at various pet stores. However, the stores on the block are all owned by men, and they’re muscling other “diverse” shop owners out of business, in some cases literally.

Harley steps in to fight them off, and a battle ensues between the male chauvinists and Harley. They run shops with names like “Men o Paws”, “Male Chauvinist Pigs”, and “Mike’s Rent-an-Animal”, with the letters ‘M’, ‘R’, ‘A’, highlighted in blue.

The idea is that they control the pet shops and don’t want cats, so Harley proceeds to fight them, using cringe-worthy phrases like “Only a loser shakes down a hot dog stand. […] And history is written by the wieners!”, while using cats to help her fight.

The symbolism is pretty obvious and hard to miss. Strong, empowered woman with cats fighting against sexist white men. This point is really driven home with the “tiki torch” march by the pet shop owners, filling the streets and shouting “It’s about ethics in the pet industry!” 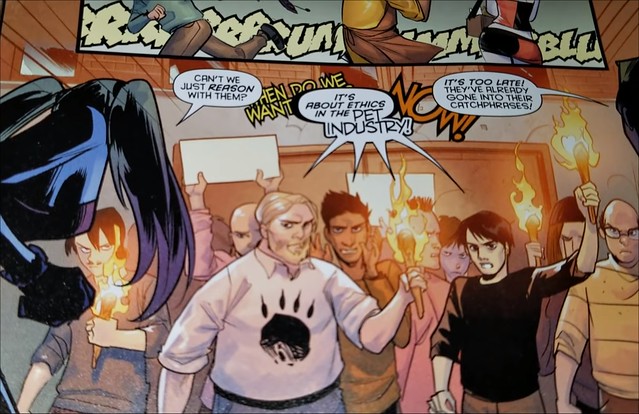 It’s an obvious allusion to the Charlottesville march from Unite The Right, and a crossover with #GamerGate and #ComicsGate, given that the original tagline for #GamerGate was “It’s about ethics in games journalism”, a tagline that still rings true today given the media’s obsession with spreading very obvious fake news.

The comic also decides to give the enemies common talking points that Leftists attribute to those who don’t align with the ideological principles of the Intersectional Inquisition. This includes one pet shop villain who decides to throw around “Soy Boy” when calling out an egg head. 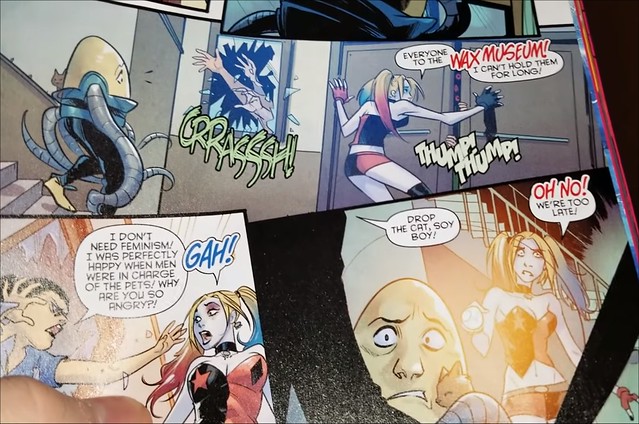 There’s also a woman attempting to attack Harley who’s supposed to be a trope of anti-feminist Conservatives who claim they don’t need feminism to be happy.

YellowFlash makes an observant point about the comic seemingly not knowing who it’s catering towards. If it’s for the SJWs, what makes them think that they actually buy comics? SJW-themed comic books have awful sales, and many of them end up getting cancelled.

If they’re trying to appeal to anti-SJWs, then why would they mock #ComicsGate? More than anything they should be trying to court the people willing to dump hundreds of thousands of dollars into comic books.

While Marvel gets a majority of the criticism for being woke, DC doesn’t appear to be too far behind. They need to be careful with their current direction, because we all know where that road leads.

(Thanks for the news tip SakuraAnimeNews)