In early January there were reports going around that Activision was being investigated for market fraud after shareholders complained about not being given a heads-up about the publisher’s split from Bungie and what that would entail for Activision’s loss of the Destiny IP as a revenue source.

According to Market Watch, the Rosen Law Firm, headed up by Laurence Rosen, Phillip Kim and Zachary Halper, is leading a class action suit against Activision-Blizzard for anyone who purchased securities between August 2nd, 2018 and January 10th, 2019.

According to the brief announcement, the firm is seeking to recover damages under the federal securities law. It plainly states why the suit has been filed, and why Activision’s conduct was labeled as misleading…

“According to the lawsuit, defendants throughout the Class Period made false and/or misleading statements and/or failed to disclose that: (1) the termination of Activision Blizzard and Bungie Inc.’s partnership, giving Bungie full publishing rights and responsibilities for theDestinyfranchise, a series of science fiction-themed video games, was imminent; (2) the termination of the two companies’ relationship would foreseeably have a significant negative impact on Activision Blizzard’s revenues; and (3) as a result, Activision Blizzard’s public statements were materially false and misleading at all relevant times. When the true details entered the market, the lawsuit claims that investors suffered damages.”

This is probably one of the few times where it looks like a pretty clear open-and-shut case against a mega-corporation.

Withholding the dissolution of the agreement with Bungie didn’t do the shareholders any favors at all, and it wasn’t like it added anything of value to Activision’s portfolio.

It’s understandable why investors would be furious given that a series of events all unfolded around the exact same time that absolutely hammered Activision’s stock, from the Bungie announcement to the Ellie fake news whirlwind, to Soldier 76 being gay, and the whole Diablo Immortal fallout. There was one hard-hitting affair after another, which an absolutely massive dive from $84.68 per share at its height in 2018, all the down to $47.27 to date, dropping by more than 44% over the last six months. 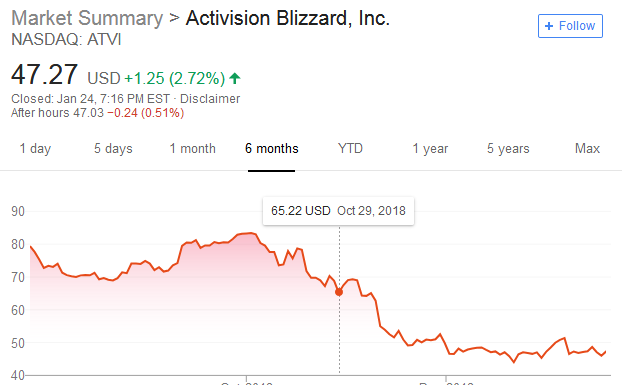 This sort of fallout with absolutely nothing on the horizon to bring the stock back up caused investors to have a fit.

Call of Duty: Black Ops 4 wasn’t enough to turn things around, the failing Overwatch League hasn’t really captured a mainstream audience, and World of Warcraft numbers have stagnated around 1.7 million, according to Gadgets 360.

With nothing particularly noteworthy on the horizon, the class-action lawsuit isn’t looking too good for Activision and their ailing stock price.

If you owned securities in Activision between August 2nd, 2018 and January 10th, 2019, you may be eligible to join in on the lawsuit. For more information be sure to visit the official Rosen Legal website.

(Thanks for the news tip WaifuHunter88)