The game was originally supposed to come out in early December, but the developer, DieselMine, couldn’t get approved to release the game onto the Steam store, even though the store page itself was approved to go live.

On January 7th, 2019 it was revealed that the game had been banned from Steam. 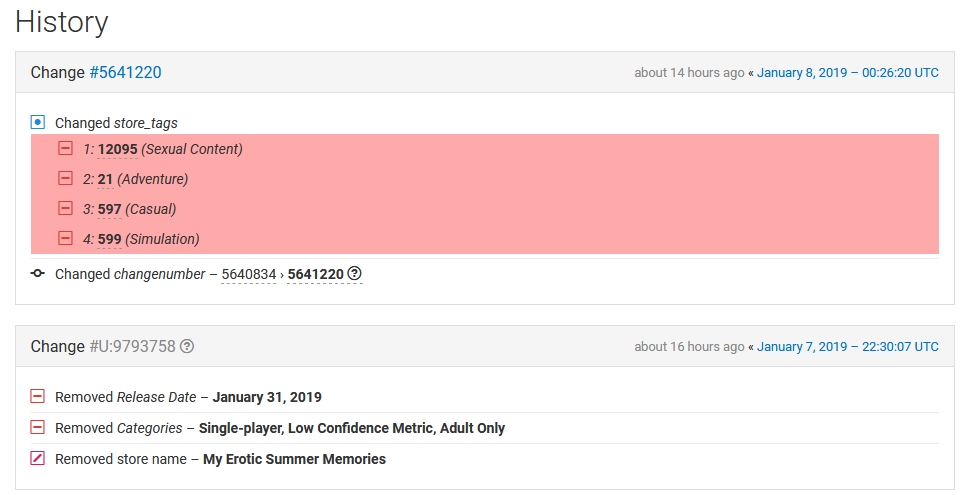 The developers kept pushing the release date back further and further in hopes of eventually getting approved, but Valve eventually just axed the game from the Steam store, as detailed over on the SteamDB page.

There’s still a Google cache archive from when the store page was still live, but if you attempt to visit the Steam store page in any capacity it redirects you back to the front page of Steam.

This is the typical modus operandi for Valve, who has been silent about a lot of the bans taking place even after the company instituted the adult filters back in September of 2018, which was accompanied by statements that they would not be the “taste police”.

It didn’t take long for Valve to start selectively banning games from the store, including the all-ages versions of games like Hello, Goodbye, or the game about a married couple featuring a bullied woman that the player character ends up taking care of called My Bullied Bride.

Other games were also affected during the ban wave, such as Niplheim’s Hunter, but after Valve originally requested that the game remove an entire character from the story, they later contacted the publisher HappyHand and stated that there was a “misunderstanding”.

Valve didn’t explain what the misunderstanding was or why the game was targeted to begin with. Many suspected that Valve’s product release manager, Jason Ruymen, is one of the individuals responsible for many of these bans since he was the one who originally permanently banned Dank Boi Games and Gay Nation from Steam for “trolling” after Dank Boi Games asked why certain games received special treatment from Valve while other games were banned without reason. Dank Boi didn’t receive an answer, and was promptly banned for asking Jason that question.

“My name is Jason Ruymen, from Valve. We wanted to let you know that we will not be shipping your title Imolicious on Steam. While we will generally ship most things on Steam, we still will not ship titles that exploit children. The appID itself has been banned and cannot be reused.”

This was also corroborated and reiterated by another Valve employee, business development associate Arisa Sudangnoi, who reinforced Ruymen’s decision to ban Imolicious from Steam.

Later it was also discovered that it was just one employee that was sending a lot of ban notices to visual novel developers during the initial waifu holocaust that took place during the spring of 2018. Henteko Doujin, the developer of The Key To Home – another game that had been banned multiple times despite being rated ‘T’ for Teen and not containing any adult content – explained in a thread on November 8th, 2018…

“Thank you very much for your opinions.

“Valve’s employee who responded us in most cases is just one person, and she is a person who sent ban warning to visual novel devs in this May.

“I doubt that she really represents valve or not, and would like to hear official statement from valve.”

It was unclear who Henteko was talking about at the time, but there were supposedly only two female employees at Valve whose names were public, and one of them was Jane Ng, who is an artist that has nothing to do with approving games. The second one was Arisa Sudangnoi, the same one who worked with Jason Ruymen to ban Imolicious and other games.

Since then, people have been calling them Valve’s “Rogue Employees”, since the duo have allegedly been banning a number of visual novel games and anime titles such as Maomao Discovery Team and Cross Love – Episode 1, while indefinitely delaying other games like Victory Project.

We still haven’t received any official reasoning for why there has been a silent change in the policy that supposedly allows Ruymen and Sudangnoi to ban these anime games and visual novels based on personal preference. Unfortunately Valve has also been unwilling to respond to messages concerning the bans.