The walkthroughs are piling in for Capcom’s Resident Evil 2 Remake for PC, PS4, and Xbox One. The complete overhaul and re-envisioning of the classic 1998 survival-horror title is already one of the most anticipated games of the year. For those of you who picked up a copy, there is a gameplay walkthrough guide available.

YouTuber Boss Fight Database has the complete six and a half hour haul for Leon, covering the playthrough from start to finish on the hard difficulty setting. You can check it out below.

Leon’s story starts with a cinematic of a fat truck driver who runs over a chick who turns out to be a zombie We then get a look at the male-model cop wannabe, Leon Kennedy.

You can run by pressing in the right analog stick.

Interact with objects by pressing the ‘X’ button on the PS4 DualShock controller or ‘A’ on the Xbox One controller.

You can aim a weapon that you have equipped by holding down the left trigger and pressing the right trigger to fire.

You can open your inventory at any time by pressing Triangle on the DualShock or ‘Y’ on the Xbox One controller.

If you get your hands on a melee weapon, hold down the left bumper to ready the weapon and then press the right trigger to attack.

Move through the mini-mart into the back room and you’ll find a police officer who gets his neck bitten off. Shoot the zombie in the head to kill it. 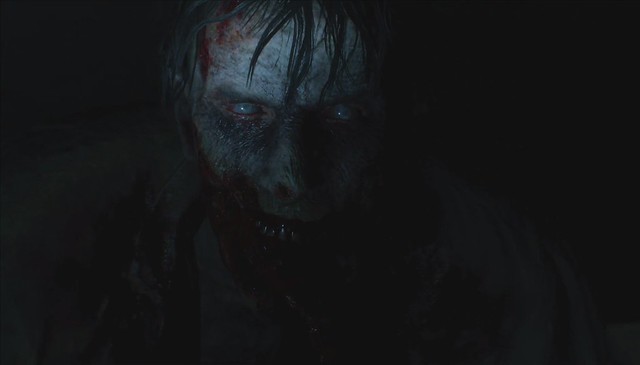 Head to the back of the room and there’s an open cabinet on the wall next to a poster of a sexy chick in a two piece thong bikini.

Take the key and use it to unlock the heavy door.

Another zombie will pop out from an isle, simply run past it and head to the exit to cue another cinematic sequence and trigger the opening intro sequence.

Save your ammo and don’t waste it on any of the zombies.

Go to the computer once you get inside the police station so you can make your way to the east hallway. Grab the health spray on the canister and then flip the switch to open the sliding door and crawl underneath.

Head through the small court room and turn on the power; there’s some ammo on the dead body. Move the cabinet out of the way and go into the ladies bathroom to find another health spray. 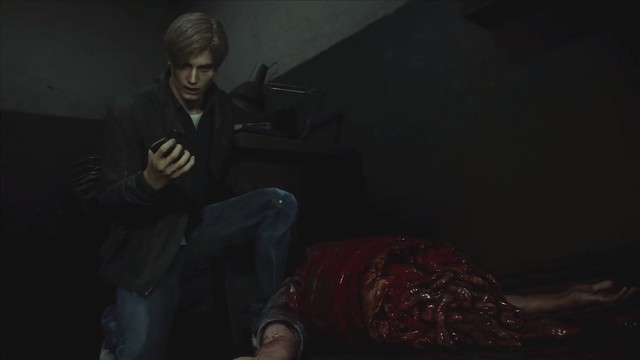 Make your way into the room where the officer is asking for help to trigger a cinematic. Take his notebook and make your way all the back to the main hall. Try to avoid wasting bullets on the zombies.

Another cinematic will play and the Lieutenant will give you a combat knife and some sound advice: if you can’t kill the zombies… RUN!

Use the knife to cut open the junction box to open the door into the next passage.

There’s a zombie chick that crawls out and you can either fight her or run.

Take note that it takes a lot of bullets to kill the zombies.

Head into the next room and climb up on the desk to make your way through the opening.

There’s a fat zombie banging on the vending machine. Shoot him clean in the medulla oblongata to put him down for good.

Head into the locker room and there are a variety of lockers you can open.

Use the keypad and input the following codes to open the locker:
106
109

You can get a hold of a roll of film and some extra pistol ammo.

When you get to your desk, you’ll have to solve a minor puzzle to get inside, which includes putting the initials of your fellow officers into the lock combination.

Make your way into the office and there’s a safe.

You’ll find an RPD hip pouch so you can carry extra items. 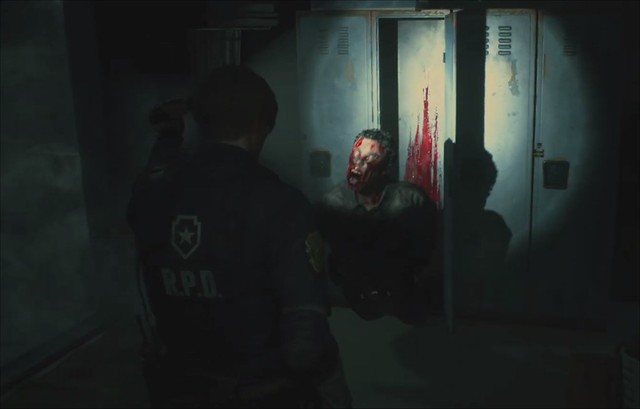 Make your way down the hall and you’ll find a zombie banging on the window. There’s some wooden planks you can pick up from the corner and place over the window.

In the next area you’ll find a typewriter where you can save your game and a storage locker with some gunpowder, and a red herb. Store the storage key and other items you don’t need inside the item box.

Proceed upstairs and there’s another set of lockers, one of which has a lock on it. The combination to the locker is: CAP

You can also grab a portable storage device from one of the lockers. You’ll have to get all the lights on the device to turn green in order to unlock it.

There’s a keypad cap inside the storage device. Take it back to the locker room and you’ll be able to place the cap on the keypad and unlock a few more lockers containing extra supplies.

Head to the very top floor and you’ll find the spade-shaped key on a desk.

Keep moving through the halls and you’ll find some additional wooden boards and ammo.

Head through the door and kill the two zombies feeding on the body in the library.

Make your way downstairs and there’s a Red Book you can acquire from one of the desks next to the stairwell. Exit the library and you’ll find the map to the upper floor of the police station.

There’s also a giant bronze sculpture. The puzzle will open up access to the Unicorn Medallion. Put in the following symbols in sequence: fish symbol, the scorpion symbol, and the pouring pot symbol.

Head around the balcony to the lion statue and input the following code: the lion head, the fig leaf, and the eagle.

This will grant you access to the lion medallion.

Head downstairs and talk to the Lieutenant, who will inform you that Claire is just outside the police station on east side.

Head to the safe inside the room with the plant on the counter and there’s a safe next to the computer. The combination is: 6 right, 4 left, 15 right.

Proceed through the hall toward the old storage room and you’ll find the keycard for the locker room on top of a dusty old box.

You can use the spade key to make your way back into the office area and all the way to the back of the locker room to retrieve the shotgun using the locker room keycard. 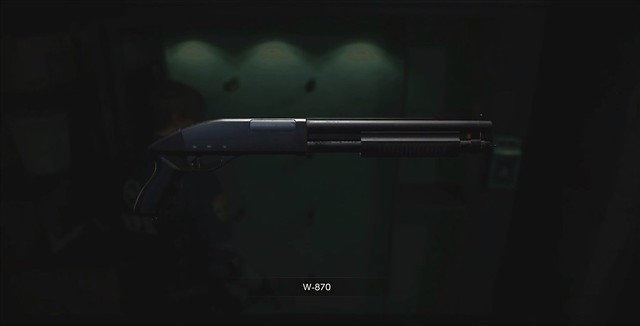 If you still have the red book, take it with you up to the antiques storage room and place the book in the hand of the statue.

The arm will rotate and the scepter will drop out.

Proceed through the police station and make your way back to the main foyer after you grab the electrical part from the desk, and the round valve handle from the office.

Use the fuse in the fuse box located in the hallway.

Proceed to the upstairs area where the smoke was blocking the pathway. On your way there you can open the locker where the code is: DCM

Place the valve on the pipe to reduce the steam and remove the smoke blockage from the path. There are several lockers with some items inside. Make your way through the hallway and there’s a licker on the ceiling. You don’t have to fight it, though, as you can move into the door into the S.T.A.R.S., office.

You can grab some of the supplies and exit the office. The Licker will roam the hall, but it follows noise, so move slowly to avoid fighting it.

Head through the corridor leading to the operations room and you’ll find an electronics device. Take the battery you found from the S.T.A.R.S., office and place it inside the electronic detonator. Head back upstairs and use the detonator on the C4 located in the attic.