Back in the summer of 2018 Valve took to the stage during a developers conference to proclaim that they would no longer be the “taste police”, and that so long as games weren’t “illegal” or “straight-up trolling”, they would be allowed on Steam. In September of 2018, the new adult filters were in place, and Valve supposedly took a hands-off approach to content curation… or at least that’s what everyone initially thought.

While the company hasn’t actually changed the terms of service agreement publicly, they have silently changed the way they curate games based on the discretion of their own employees.

All seemed to be going well at first, and a flood of adult-oriented games made their way onto Steam, including games featuring explicit loli/shota content, such as Evenicle, Eroico, The Ditzy Demons Are In Love With Me and Maitetsu: Pure Station to name just a few.

However, shortly after allowing all sorts of uncensored anime and visual novel games onto the Steam store, certain games began being rejected, banned, or withheld from release on Steam. Red flags were raised when certain games were still prohibited from being released on Steam, even in censored form, such as Maidens of Michael. The all-ages version of the game would later be approved for release on GOG.com.

Some people thought that maybe this was an oversight on Valve’s part and shrugged it off. Others felt that something more nefarious was afoot and that Valve hadn’t given up their censorious ways.

Later, it was revealed that games like The Key To Home were still being denied release on Steam, even though the game was rated ‘T’ for Teen and contained no sexual content or nudity. However, Valve felt that the game contained sexually “suggestive” content, and that was enough to warrant a ban from Steam.

At first it was games featuring loli characters, like MaoMao Discovery Team and The Last Girl: Janna’s Diary of Shame.

The general consensus was that it was wrong to ban games, but since it was loli/shota games, it was okay.

Some people tried using the excuse that the characters were all high-school age and therefore Valve was justified in banning the games.

Later, some indie developers would reveal off the record that Valve was banning games that contained “child exploitation” and were set in “high schools”.

Nothing in the law actually dictates that anime or visual novel games are illegal, but the interpretations can be applied to any kind of published work that contains sexual content, nudity, or anything that can be defined in anyway as “obscene”. Obviously, nearly every ‘M’-rated game on Steam – even the ones from AAA publishers – could fall into that definition based on some of the content they have, but they aren’t being banned.

What’s more is that games like A Hand In The Darkness are still available on Steam despite boasting about containing underage sex between boys still in high-school.

Even still, Valve would continue to ban the games using the loose definition of “prurient representation” and “child exploitation”, even for games that didn’t even contain kids, like My Bullied Bride and Niplheim’s Hunter. However, in the latter’s case, they managed to get Niplheim’s Hunter back on Steam after Valve claimed that there was a “misunderstanding” regarding the game.

In between this time, however, certain other games were also releasing on Steam that also contained high-school settings, seemingly underage characters, and sexually explicit content, such as Sweet Pool. Yet the gay, sexual thriller was given a pass.

The more innocuous ecchi game, Moe Reversi, was not. Even though the game contained no actual nudity or sexual content, the game was banned from Steam.

During this time, other games were being postponed from release, indefinitely, such as Victory Project, NekoMiko, and Food Girls. In the case of Food Girls they were apparently told what they had to change to get the game released on Steam, but Victory Project was recently banned from Steam, along with High School Fantasy and Ona-Ken! International.

According to an e-mail sent to adult games publisher DLSite in January of 2019 explaining why their game Ayura Crisis! was banned, it was revealed that these bans are deliberate.

Originally gamers were under the impression that product release manager Jason Ruymen and business development associate Arisa Sudangnoi were acting out of their own accord as “rogue employees”, and were behind most of the bans according to the e-mails shared by other developers; but in the e-mail to DLSite, Valve came out and said that they will ban games based on their own discretion if they deem those games are in a legally “grey” area, writing…

“[…] After review, we will not be able to ship your game ***** on Steam. While we strive to ship most titles submitted to us, we found that this title features themes, imagery or descriptions that we won’t distribute.

“We are not interested in working with partners that dance around the edges of what’s legal. For instance, setting your game in a high-school but declaring your characters are of legal age would fall into that category and be banned.

“This app has been banned and cannot be reused.” […]

So this goes against their original terms of service and their original announcement that they would only be removing games that were “illegal” or “straight-up trolling”.

“[…] we’ve decided that the right approach is to allow everything onto the Steam Store, except for things that we decide are illegal, or straight up trolling. Taking this approach allows us to focus less on trying to police what should be on Steam, and more on building those tools to give people control over what kinds of content they see. […]”

Keep in mind that just because someone randomly says something is “illegal” does not make it “illegal”, unless it’s defined as such within the legislature.

Nevertheless, games that fall into Valve’s legal “grey area” could literally fit the description of any game that any legal body could paint as “obscene”, from Metro: Last Light to Saints Row The Third to The Witcher 3 to Grand Theft Auto V, yet none of those games have been touched.

Valve also pointed DLSite to the Steam Partners terms of service, where there was an outline on what sort of content could not be included on Steam. If you follow the link it lists the following in the rules and guidelines of content that shouldn’t be published on Steam. 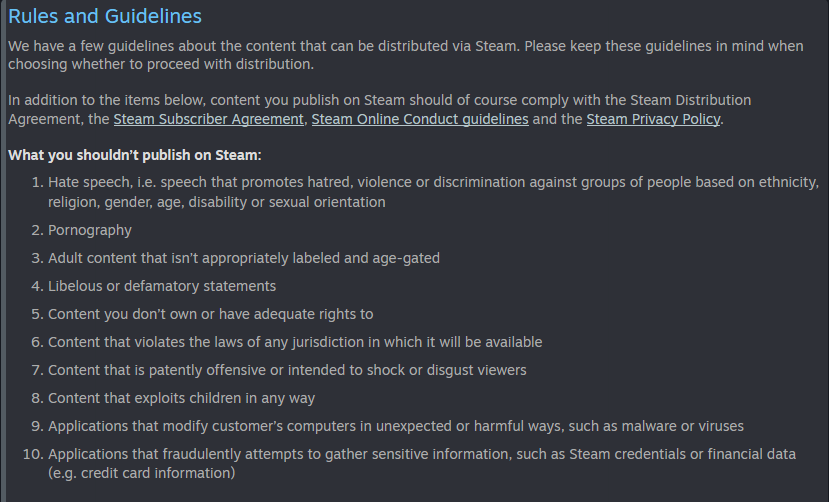 [Update: According to StarKitsune, the Steam Direct sign-in page actually has a revised rule set that omits rule 1, rule 2, and rule 7. However, the actual Steam Direct documentation page currently available for developers retains all 10 rules.]

What’s interesting is that there are actually plenty of games on Steam that already goes against some of those rules. For instance, Mortal Kombat X contains shocking gore, which would violate rule 7. And Postal 2 goes out of its way to be offensive, which would also violate rule 7, yet both of those games are available to purchase on Steam, along with Fight of Gods, which was also in the news for being “offensive”.

Games like Life Is Strange and Bully also both violate rule 8, yet they’re also still available on Steam, considering that one deals with young girls literally being sexually exploited by a child pornographer and murderer, while the other contains child violence. And what about the recently released Senran Kagura Burst Re:Newal, which features young girls at a ninja school – or academy – where plenty of scenarios involve them in states of undress? How does that not violate Valve’s loose interpretation of “child exploitation”?

Essentially, the takeaway is that there are rules for certain developers and not for others.

Indie developers obviously have to abide by a different set of rules, lest they get banned. Alternatively, if you’re friends with someone at Valve, like Christine Love, you can launch your game on Steam uncensored with full-on explicit rape scenes even before the adult filters were in place.

Given that majority of the media out there are is controlled by political activists, the news is oftentimes distorted or misreported a healthy omission of facts about why some of these games are getting banned and why others aren’t. There’s also oftentimes a misrepresentation of the facts or the laws in order to shame people who question Valve about their inconsistent bans as a way to stifle the conversation, which is what the moderators are doing over on the Steam forums, where they continually ban discussion of the censorship happening on Steam by claiming that those games are illegal. 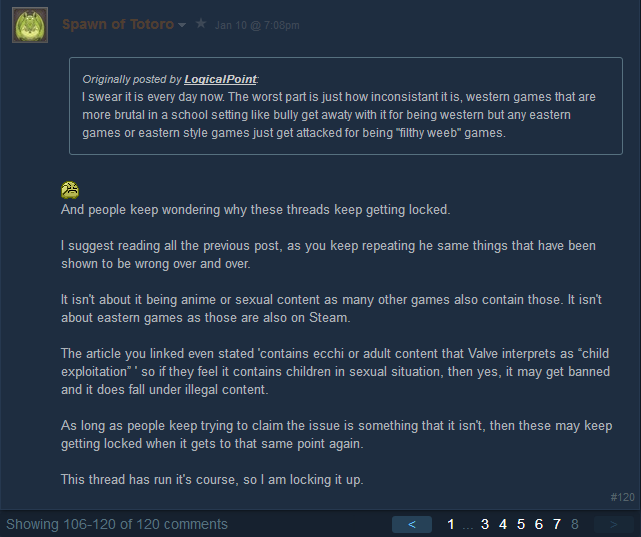 The one thing that completely destroys that argument is that even if a game is illegal in a certain jurisdiction, Valve oftentimes simply region locks the game so that those within that jurisdiction cannot purchase the game.

In fact, this was recently done with Mortal Kombat 11, where Steam restricts any purchase of the game from Japan.

Valve does this with plenty of other games on the platform, including Fight of Gods, which was region-restricted in Malaysia.

So it’s not impossible for Valve to simply region-lock games that are allegedly illegal in certain territories, and still let people purchase those games from regions where they’re legal.

However, instead of giving people the choice to purchase the game or not, or allow the curation filters to work as intended, Valve is actively requesting some games to be censored (like in the case of Niplheim’s Hunter) or outright banning the games from the platform.

Basically, we’re right back to where we were last year when the original waifu apocalypse took place, where a bunch of visual novels and anime games were flagged and scheduled to be purged from the platform.

This time around the purge is happening slowly and with just a handful of games each month from indie developers, so Valve is managing to avoid any major spotlight on the matter, but as the bans and censorship keeps piling up, it’s just a matter of time before a recognized game gets hit in the process and Valve will either have to make a public statement about their change in policy, or eventually face the wrath of angry gamers.

I’ve reached out to Valve multiple times over the last several months to get a clarification on these new rules, but they’ve refused to respond. Thankfully, distributors like Top Hat Studios are working on opening up their own storefront, which may provide a nice alternative for the developers currently being spurned by Steam’s inconsistent policies.