DLSite announced that the English version of the Touhou parody game, Youmu Konpaku & Dungeon of Lewd Creatures, has officially launched on its digital store page for $18.82. You can download the game for PC right now, featuring plenty of dungeon-crawling lewd action.

The tentacle-laden, interspecies, sexual-escapades follow Youmu-chan as she attempts to defeat the enemies located inside of a monster hideout that captures young virginal girls and basically exercises all manner of Bill Cosby-style antics against the girls’ will.

The goal is to defeat the enemies and get out of the monster cave with Youmu’s virginity intact. 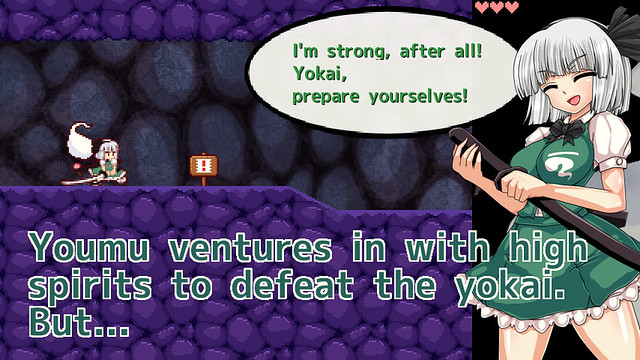 The actual gameplay is surprisingly fluid. It plays out like classic 16-bit platformers, similar to Aero The Acrobat or Sonic The Hedgehog, only difference is that there’s plenty of lewding taking place involving the main character as she attempts to flee from the monsters with a big ‘ole samurai sword.

As you travel through the dungeons, you’ll have to solve some platforming puzzles, figuring out how to reach certain ledges or overcoming certain obstacles. You can use springs to help reach new heights, or travel to certain locations using cannons. There’s even a nice little head-nod to Donkey Kong Country as you ride in a mine cart.

The game also gets creative with the lewd scenes, allowing players to unlock new costumes for Youmu to acquire, which will change her base illustration as well as some of the CG sex scenes.

There are a variety of different encounters with different monsters and creatures throughout the game, each subjecting Youmu to one form of humiliation or another.

You can get your hands on the game right now from over on the NSFW DLSite store. The game does contain mosaic censorship, however, so that’s something to keep in mind.