Amazon has banned a number of racial identity books from the store, several from author and philosopher, Jared Taylor, along with books from Greg Johnson, and George Lincoln Rockwell. This comes after Quartz did an article decrying Amazon for hosting what they called “Neo Nazi” and “white supremacist books”.

The news was initially picked up by American Renaissance, which published an article on February 27th, 2019 noting that four of Taylor’s works were banned from the store.

“Yesterday, Amazon banned Jared Taylor’s collection of essays, If We Do Nothing, and two collections he edited: A Race Against Time and Face to Face with Race.

“In all cases, Amazon claimed that the books’ “subject matter” was “in violation of our content guidelines,” but did not explain why. There is no appeals process .”

It’s true that the books are no longer available, but web archives are still available for the 2011 book White Identity: Racial Consciousness in the 21st Century, along with the 2017 release of If We Do Nothings: Essays and reviews from 25 years of white advocacy.

Amazon’s move to ban the books came several days after Quartz published an article on February 19th, 2019 shaming Amazon for hosting the works listed above, along with other works from other authors that were also banned from the e-tailer, including the late George Lincoln Rockwell’s 1966 tome White Power, and Greg Johnson’s White Nationalist Manifesto. 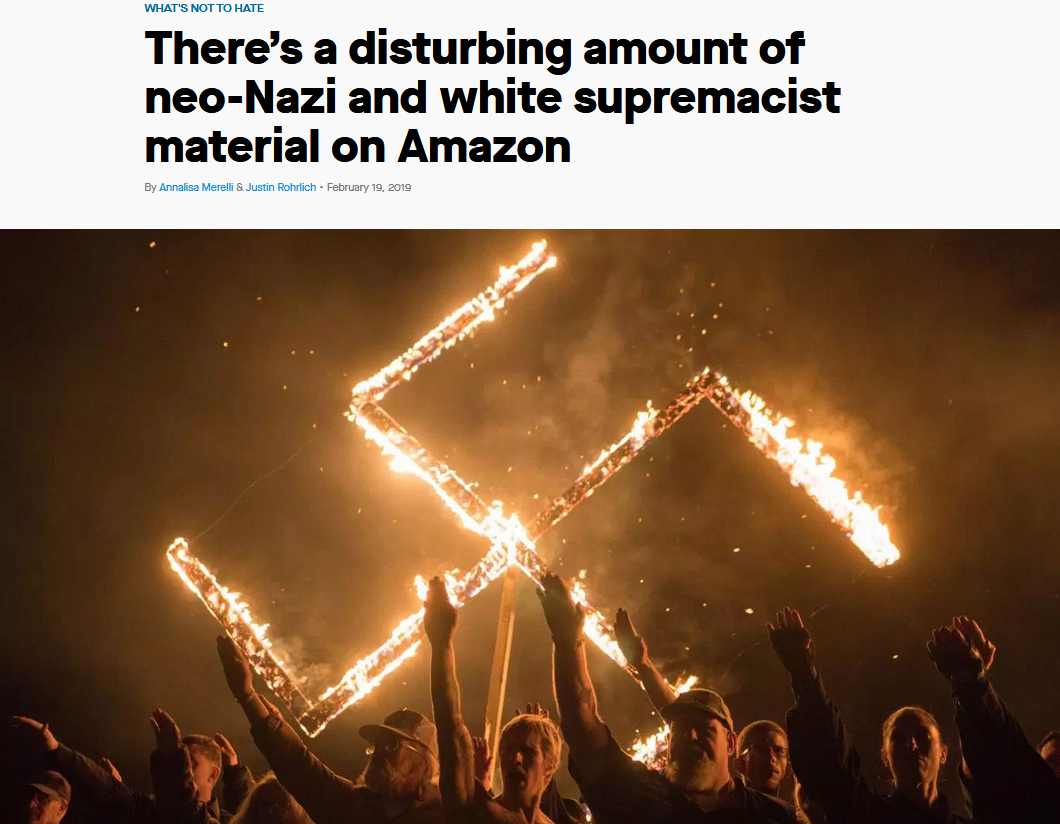 Not every book that Quartz names in the article is banned from Amazon. Jason Köhne’s Born Guilty is still available, as of the writing of this article, along with Andrew B. Aames’ White Power Manifesto. And obviously, Adolf Hitler’s Mein Kampf is also still available.

According to Quartz, they proclaimed there was no clear fix, but also pointed out that eBay bans “hate speech” along with other platforms and regions. They state that since Amazon is a U.S., based company it may attempt to retain “American values”, writing…

“It’s hard to make the case that Amazon has a duty to ban certain content from its US site, because free speech is at the core of American values.

“’I don’t know that there is a clean fix,’ says Holt of Right Wing Watch.”

Amazon declined to offer a comment to Quartz. However, the company appeared to have no qualms about banning some of the aforementioned books in the Quartz article, not just across the U.S., iteration of the site either. These books have been banned from all of the different international iterations of Amazon as well, including but not limited to Amazon UK, Amazon Germany, and Amazon India to name but a few.

Over on Greg Johnson’s Counter-Currents website, he notes that a total of 15 books were banned by Amazon, writing…

“In some cases, all traces of these books have been removed from Amazon. In others, they are simply no longer being sold. The inconsistency and sloppiness of this purge smack of blue-haired SJW hysteria.

“Realistically, though, we have to expect that all Counter-Currents titles will eventually be purged. Our books remain available at other bookstores, at least for now.

According to American Renaissance, they pointed out that there are still a number of other racial identitarian books available on Amazon, proselytizing black nationalism and terrorist manifestos, writing…

“It continues to sell the bomb-making manual known as The Anarchist’s Cookbook, the Unabomber’s Manifesto, and justifications of terrorism by Al-Qaida, Osama Bin Laden, and Hezbollah. It also sells black nationalist manifestos by Elijah Muhammad, Marcus Garvey, and Louis Farrakhan.”

The article also points out that selectively banning certain racial identity books but not others contradicts the company’s originally stated mandate to allow for all sorts of “objectionable” material on the store because they didn’t believe in censorship. CNBC published an article on November 10th, 2010, where Amazon spokesman Drew Hardener told the outlet…

“Amazon believes it is censorship not [to] sell certain books simply because we or others believe their message is objectionable. Amazon does not support or promote hatred or criminal acts, however, we do support the right of every individual to make their own purchasing decisions.”

That was in response to a social media outcry campaign to get Amazon to ban the book The Pedophile’s Guide to Love and Pleasure: A Child-lover’s Code of Conduct.

Two days later Amazon ended up banning the book, according to News.com.au. A month later, on December 21st, 2010, the author of the book, Philip Ray Greaves II, was arrested for violating Florida’s obscenity laws, as reported by the Daily Mail.

Obviously Amazon’s stance has changed since that incident, as they now clearly target and ban certain books they deem inappropriate for public consumption… or at least they do so at the coaxing of certain media outlets.

Certain people on the Kotaku in Action sub-reddit floated around the hypothesis that this might be a false-flag attempt by the authors to gain notoriety by purposefully pulling their works off of Amazon in order to make headlines. This would be a nice plan indeed… if only authors of the banned books like George Lincoln Rockwell hadn’t been assassinated back in 1961.