Anime News Network’s editor-in-chief, Mike Toole, recently came under fire for claiming that certain YouTubers such as Clownfish TV were “Nazis”. The tweet was later deleted, but not before it circulated around and caught the attention of the anime community.

The tweet calling Clownfish TV “Nazis” was posted up on February 5th, 2019 by Toole, and was shortly thereafter taken down. The tweet was in response to videos made by YouTube outlets like Clownfish TV and Lost Pause criticizing the media for running with allegations against anime voice actor Vig Mignogna without thoroughly vetting them. You can view archives of the tweets below. 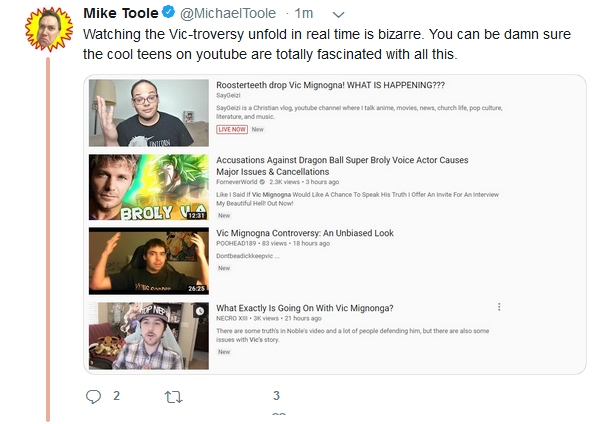 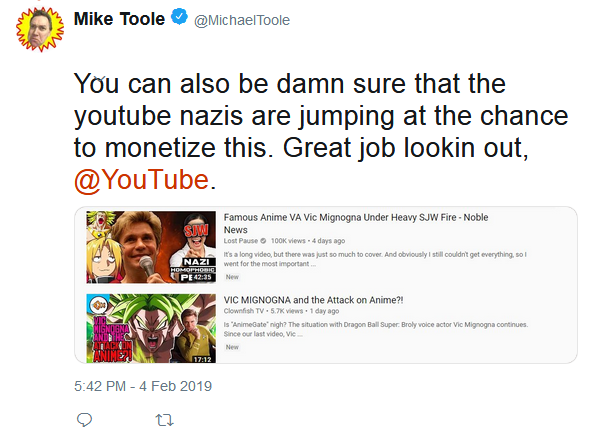 Even though Toole deleted the tweet after it made its way around social media, Clownfish TV did a YouTube livestream about it.

The issue obviously did not die down and was repeatedly brought up in the Anime News Network forums, where the moderators began to actively delete comments or topics about the controversy. Eventually, moderator Mad_Scientist finally addressed the criticisms aimed at the Anime News Network staff, making a post on February 6th, 2019 that stated…

“For starters, Mike Toole isn’t the owner of ANN. He’s one of several editors. He had nothing to do with this article. He made a single tweet commenting on two Youtube channels which both at least appeared to be of the “evil feminists are destroying anime, anime gate now!” variety, using language that some might find too harsh or hyperbolic, but which I find ironic given how often I’ve seen the term feminazi thrown around. Then a bunch of people started pestering him on Twitter, got really upset when he blocked them, and now this has led people to apparently dig up nearly decades old tweets referencing Vic to prove how apparently this is all a grand conspiracy by Mike to censor YouTube.

“That’s it. That’s the conspiracy. A guy who works for ANN but didn’t write the Vic articles made a tweet some folks disliked.” […]

The post also addresses something brought up in a separate Clownfish TV video where the duo criticized Anime News Network for not reporting on Vic Mignogna’s alleged misconduct back in 2011 if it was actually as bad as they claimed it to be.

According to Mad_Scientist, this was addressed in a separate post by Anime News Network CEO, Christopher Macdonald, who made a comment back on January 31st, 2019 explaining that the reason they didn’t address Mignogna’s allegations before was because it took the #MeToo movement for them to write something about it…

“I’ll accept this criticism. Many of us at ANN have known about Vic’s behavior for over a decade. We never wrote about it. Rather than deciding not to write about it, it never even occurred to us to write about it. It took the #metoo movement for us to realize that the we, as journalists, have a responsibility to make people aware of what goes on in these situations.”

Obviously, this didn’t completely quell the outrage over Mike Toole calling the YouTubers “Nazis” before deleting the tweet, nor did it absolve the controversy surrounding other members of the Anime News Network staff jumping into the fray to castigate Mignogna without solid evidence, which has resulted in some rumors circulating that the loss of work and convention bans has convinced Mignogna to lawyer up.

[…] And yet, we keep on seeing these conspiracy theories show up. Oh, this is Mike Toole’s attempt to censor YouTubers, look at this one tweet he made. Oh, this is all a grudge of Jake and Zac’s, look at their Twitter. It’s weird, isn’t it, how people can somehow monitor Mike Toole’s twitter so closely they instantly know the moment he criticizes two anime YouTubers, but somehow miss the literal weeks worth of tweets from him and pretty much every single ANN staff member explaining the actual reason for these articles and talking about it in depth well before anything was even published.

“Actually it’s not weird, because this is not a good faith argument. The people originating these Twitter conspiracies know very well they are nonsense. Their goal is disinformation.”

The reference to “Zac” is to fellow Anime News Network staffer and editorial director, Zac Bertschy. He, too, was engaged in the war of words over Vic Mignogna, the allegations, and the people attempting to break down what was false and what was not. However, on February 7th, 2019, Bertschy finally came out and began berating anyone using the term “SJW” (which is actually censored along with the word “trap” from being used on the Anime News Network forum), calling them “fascists”.

Disclaimer: anyone who uses the phrase “SJW” is a gigantic fascist-leaning piece of shit whose manufactured fake “”outrage”” should be dismissed and ignored as bullshit recruitment tactics. It’s all a bunch of bad faith culture war trash.

Bertschy goes on to rewrite history, claiming that the term Social Justice Warrior was created by white supremacists.

“SJW” is a term invented by white supremacists, used to demean and dismiss people who dare give a shit about the rights of marginalized populations, the rights and dignity of victims.

“Fascist” is defined by history.

This is incorrect. The term actually dates back to 2012, according to Urban Dictionary, relating to slactivism and tumblr culture for people who are easily offended and attempt to virtue signal for internet points.

Anime News Network has maintained a rather pro-Social Justice Warrior stance, which is why they ban users for pointing out the ills of SJWs and how they’re running rampant throughout the entertainment medium to get things censored and banned.

In this particular case the outlet has firmly sided against Vic Mignogna, taking nearly any and all allegations at face value to drag him through the mud. Some fans and community members were also distraught at the outlet’s decision to drag Mignogna through the mud but avoid writing anything about fellow voice actor Neil Kaplan, who also had allegations of misconduct leveled at him, too.

For now the anime news site has doubled down on its stance against people speaking out against the Mignogna allegations or calling their veracity into question, as well as making it known that they despise YouTubers who question the narrative that the Left-wing media has setup regarding people who claim to be #MeToo victims.

(Thanks for the news tip randomanonymouse)