[Update 2/10/2019:] Anime Outsider reached out and their statements are included in the article.

[Original article:] The Twitter account for Anime Outsiders was suspended on February 9th, 2019 after they had begun posting evidence to help clear voice actor Vic Mignogna of the allegations leveled against him. If you attempt to access the account on Twitter, it takes you a suspension page.

The suspension came shortly after voice actor Jamie McGonnigal claimed that he had friends at Twitter that would be handing down suspensions after those who were against Vic Mignogna caught wind of Anime Outsider’s activity regarding questioning other voice actors about the allegations leveled at Neil Kaplan and attempting to defend Vic Mignogna. When McGonnigal was informed about this, he mentioned on February 6th, 2019 that he was blocking people attempting to drag him into the conversation.

Oh yeah, my block button is on FIRE tonight. SO many garbage people on twitter. And no, I have no opinion on one allegation that was made about Neil Kaplan that happened to come from a vocal defender of Vic Mignogna the same weekend Neil spoke out about him. No opinion at all.

However, screen captures show where McGonnigal had made the tweets on February 6th, 2019. The tweets were deleted on February 9th, 2019. 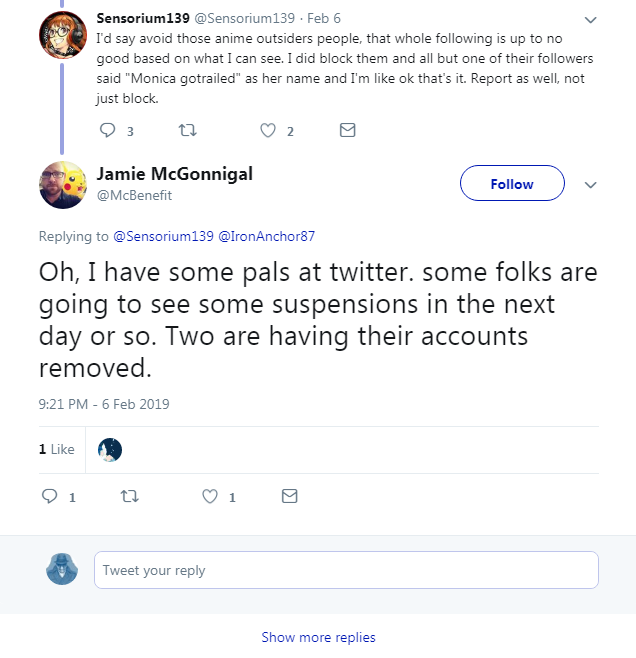 The tweets have also been wiped from Google’s cache. Luckily there is a backup of the tweets on archive.is.

When called out on it, McGonnigal would later tweet out that he never said he was using Twitter staff connections to do anything.

Who said I’m using Twitter staff connections to do anything? I merely said I had pals there. I’m reporting accounts tweeting racist, sexist, ableist, homophobic shit just like anyone else would. I just also happen to have friends at twitter.

Where does that say my friends at twitter are doing anything?

While McGonnigal never explicitly said he was going to have Twitter suspend the accounts, the tweets definitely made it clear that the accounts would be suspended based on his connections to those at Twitter.

Regardless of what McGonnigal claimed he did or did not do, Anime Outsider’s account was suspended on February 9th.

Anime Outsiders Twitter account has been suspended after days of providing evidence proving the campaign against Vic Mignogna is based on false allegations. Censorship at it’s finest

[Update 2/10/2019:] Anime Outsider reached out to One Angry Gamer and provided a statement regarding what went down involving McGonnigal, writing…

“Jamie McConnigal had a brief interaction with us on February 6, where he blocked us because he was offended that we made a joke about him whiteknighting for fellow VAs Monica Rial and Jamie Marchi. He blocked us and within minutes of that someone on twitter tagged us in an archive link of the tweet you showed in your article where he said in response to someone talking about us that he would get some friends at twitter to suspend accounts.

“The tweet in question was also deleted right as our suspension came down yesterday. Twitter gave us no reason for the suspension and probably won’t be responding to appeals like with previous suspensions.

“We’re used to people getting mad at us and abusing the report system to get us off of Twitter, the only difference here is that it involved a VA who publicly accounced that he would run to the powers that be because of a quote tweet.”

Things have been escalating ever since Vic Mignogna had the allegations of misconduct leveled at him, following the recent success of Dragon Ball Super: Broly, where he voices the character Broly. The allegations have resulted in Mignogna being removed from anime conventions and fired from various jobs.

It’s not stated exactly how long Anime Outsider’s account will be suspended, but it definitely makes it clear that there are groups intent on maintaining the narrative that Mignogna is guilty at all costs.