Bend Studio’s Days Gone hasn’t received a whole lot of press or promo material leading up to its April 26th release this spring as a PS4 exclusive. However, Sony finally let loose a new cinematic trailer giving gamers some slight insight into the past life of Deacon, the main character from the open-world zombie-survival game.

The trailer is just over two and a half minutes long, featuring the protagonist slowly walking through what looks like the destroyed remains of a church while reminiscing about his past life, specifically his wife.

We see Deacon closing his eyes to think back on his wedding day where he hooked up with the tattooed blonde of his dreams. 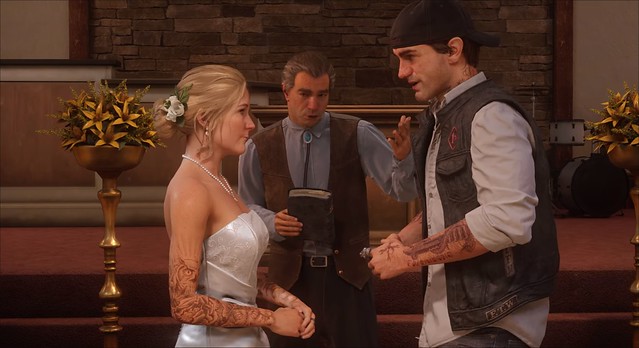 It’s literally shocking these days to see a white heterosexual couple in video games these days. So many games are all about subversive cultural Marxism that literally, normal content that should be normal in America is now a rarity, such as seeing a straight white male and a straight white female getting married.

It’s a crying shame that it’s even cause for celebratory notice but nearly every other game out there is constantly pushing the SJW agenda down the throats of every single person just trying to escape the sociopolitical nonsense that has become inescapably pervasive in today’s entertainment industry. A prime example of this is nearly every original movie that appears on Netflix… like Bird Box.

Anyway, you can check out Sarah and Deacon’s wedding in the clip below.

The good times and fond memories of Deacon’s flashback doesn’t last long, as he’s interrupted by some violent gang members out to do him in along with the hordes of freakers out to rip him to pieces.

It’s not the greatest trailer out there, and most people who aren’t already convinced to pick up a copy probably won’t, but it’s still a violent reminder of what’s in store come April 26th when the PS4 exclusive launches on Sony’s system.

It’s probably one of those games worth enjoying for the time being, because there’s really no telling the next time Sony will bankroll a first-party exclusive starring a masculine, straight white male.