During the EVO Japan live-stream on Twitch, Team Ninja and SNK announced a partnership to bring Mai Shiranui and another character from King of Fighters XIV to Dead or Alive 6. However, during the demonstration of Dead or Alive 6, EVO president Joey “Mr. Wizard” Cuellar had the stream shut down and apologized.

You can view the clip below that was on before the stream got briefly shut down.

It featured the two Japanese models goofing around in between the rounds when Dead or Alive 6 producer and director Yohei Shimbori was setting up a match. The clip included the girls jiggling their butts and boobs to mimic the soft body physics in Dead or Alive 6.

Shortly after this Shimbori showcased the free-cam mode in the game, zooming in on the girls’ butts while they were wearing swimsuits, as well as showcasing Nyotengu in a rather compromising position. 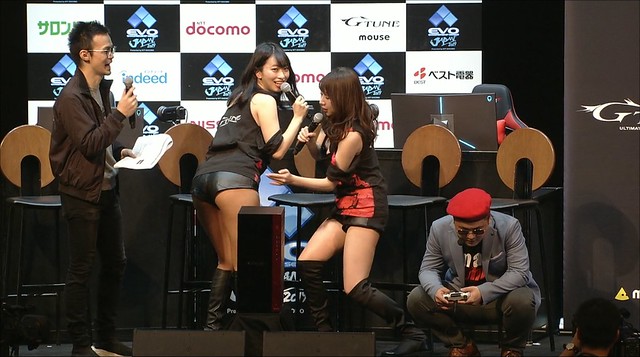 However, the act of flirty femininity featured throughout the stream along with the free-cam shenanigans was enough to make Joey “Mr. Wizard” Cuellar surly.

The EVO head honcho thoroughly condemned the segment and recoiled at the act while apologizing to Social Justice Warriors after he had the stream temporarily shut down. In a now deleted tweet, he claimed that the promotional segment to introduce Mai Shiranui and showcase the free-cam in Dead or Alive 6 did not represent the FGC or EVO, to which plenty of people dropped into the comment section to renounce his apology, stating that he did not speak for the FGC.

The DOA ad that aired on our stream does not reflect the core values of Evo or the FGC. We ended the stream temporarily to protect the integrity of our brand. We sincerely apologize to our fans.

Viewership was at the highest of the entire stream when they were showing off lewd content. You think people who don’t want to see that got there, I doubt it. You’re so out of touch. Chat was crazy hyped over the whole deal.

All of this clearly overshadowed the fact that the stream segment was supposed to announce Mai Shiranui in Dead or Alive 6, which eventually found its way into the news sphere when Famitsu tweeted it out after Cuellar undermined Team Ninja’s attempt to make the announcement.

One of the things that no one seems to be bringing up about this whole fiasco, though, is that Cuellar essentially sex-shamed the models for showing off their bodies and being coquettish.

I suppose Cuellar adheres to the new-wave of feminism where men get to condemn women for exerting their sexuality in ways that they don’t approve of.

Dead or Alive 6 probably didn’t need anymore controversy surrounding its release than it already has, but in some ways it appears Yohei Shimbori – even though he flip flops like a fresh fish out of water – was partially right when he said that sexual imagery in games is less acceptable today than it was in the yesteryears of gaming due to the people that control the industry.