Fate/Grand Order’s Emiya Altered For Western Release, Prompting Some To Call It Censorship

Aniplex and DelightWorks’ Fate/Grand Order’s Western version hasn’t been able to stay out of the spotlight of controversy recently. Some fans noted that in the promotional trailers for a recent update, one character, Emiya Alter, had his skin lightened for the Western release. A few called it censorship, others called it compromise.

There’s a thread on Kotaku in Action discussing the issue, where they highlight the differences between the two iterations of the character, with the Japanese version being darker and the Western version being lighter.

The character is originally a pale skinned Japanese fellow who continuously and recklessly uses magic, which causes his skin to become darker, until he looks like the image on the right in the comparison above.

Some gamers felt the change in the character for the Western release was contrary to what was mentioned in an interview with Anigamers back in July of 2017, where Aniplex president Atsuhiro Iwakami stated that the game’s Western release would be the same as the Japanese version, or at least as as close to it as possible…

“Currently, there is no plan to make any changes. Our goal is to keep the experience as close as possible to the original. Say there’s a 5-star Servant that I really want, but it never drops. That’s part of the experience and so you end up finding a way to go through the game with these 3-star or 1-star Servants.

“Like in Fate/stay Night, Rin tries to summon Saber, but she doesn’t get Saber. That’s the sort of experience we want for everyone.”

A similar thing was mentioned during the Anime Weekend convention in Atlanta back in 2017, where Albert Kao, the localization producer at Aniplex of America addressed concerns over the Western version being censored, specifically Jack The Ripper. Grand/Order Gamepress captured the quote, where Kao responded by saying…

“[…] If you’re worried about censoring Jack the Ripper, the answer is no. I don’t intend to censor anything in the game, because that’s how the game’s intended to be enjoyed. Also, if you’re watching Apocrypha right now (I won’t ask how), Jack’s design is straight from Apocrypha.

“There’s no intention to censor anything unless someone forces us to.”

However, in the promotional trailers for the Western update featuring Emiya, it was noted that his skin tone had become surprisingly lighter than his Japanese version.

You can see the comparison between the two in the promotional trailers below.

Some originally thought that the change was just for the animated sequences, but it was later confirmed that in the actual game the skin tone for Emiya had been lightened in the Western release.

This applied both to his cinematic talking sequences and for his in-game character battle sprite, which had also been lightened as well. 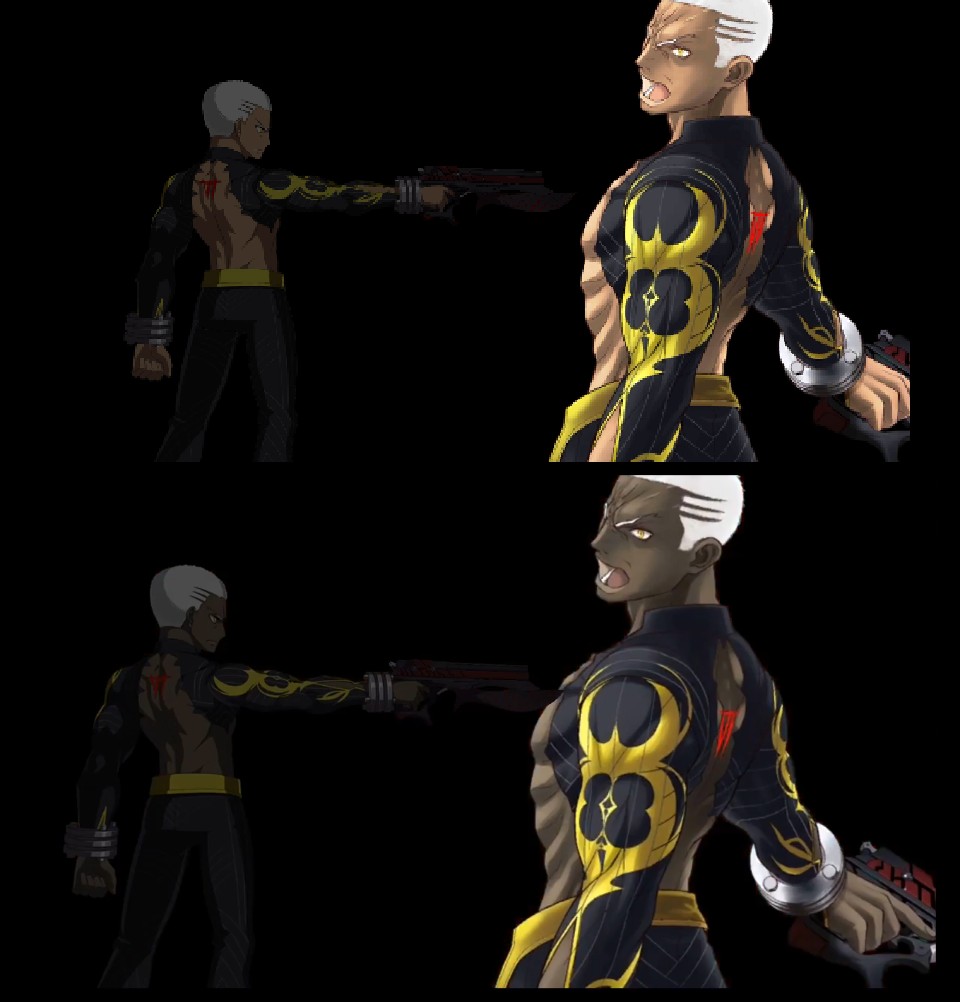 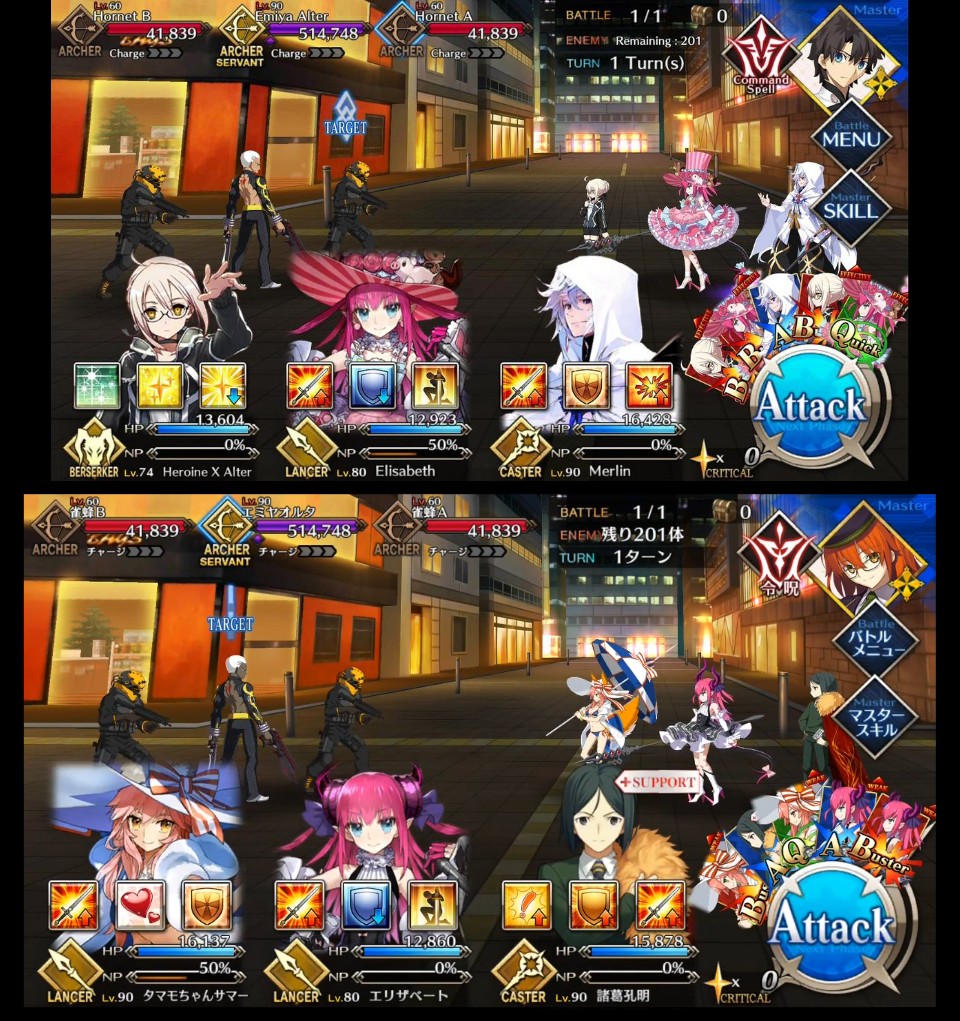 Some people called this a form of censorship, others called it a compromise, and a few believed that there was no winning either way. The Fate/Grand Order sub-reddit typically agreed that the situation was bad no matter what, but are torn on how it should have been resolved, most just don’t like that he no longer appears as he was supposed to.

The issue didn’t go unnoticed by anime fans and RPG enthusiast sites. In fact, one site actually attempted to ask about the issue.

In an interview that was published on February 26th, 2019 on RPG Site, they managed to speak with Aniplex creative producer Yosuke Shiokawa about the game. After the interview they inquired about the skin tone change for the character Emiya, writing…

“A new four-part story arc, the Epic of Remnant, just began in the English release with the first part set in Shinjuku. In the marketing campaign for the Shinjuku part, there were noticeable design changes to one of its characters, Emiya Alter. He exhibits a lighter skin tone compared to his design in the Japanese version of FGO. The changes extend beyond the marketing and all in-game assets, artwork, and in-game models for Emiya Alter also reflect the changes. I was stopped mid-interview from asking Shiokawa-san the reasoning behind the changes and if there would be similar alterations to other characters in the future.

“After my interview with Shiokawa-san, I briefly spoke with Aiko Makino, one of my PR contacts for Aniplex of America about the matter. She claims that “it’s because it wasn’t Shiokawa’s sole decision; it was more of a group decision and it isn’t fair for him to be the spokesperson for that decision.” I assured her that I understand and thanked her for giving RPG Site the opportunity to interview Shiokawa-san once again.

“Aniplex and DELiGHTWORKS Inc. has not given us an official statement regarding the changes in Emiya Alter’s design at the time of publishing this piece.”

It was a minor nuisance for Aniplex back in the early first half of January 2019 when the promo trailers first appeared, but now that the update includes the change, a few more people are being vocal about it and resurfacing the topic in some communities.

For now it seems like one of those issues where Aniplex simply wants the drama to go away.

(Thanks for the news tip MeteroD)