Frank Cifaldi Tries To Get PlayStation, Nintendo, Xbox To End Business Relations With THQ Nordic Due To 8chan AMA

After THQ Nordic participated in an AMA over on 8chan, answering questions and engaging with hardcore gamers, game journalists flipped out and went on a rampage on Twitter, attacking the publisher relentlessly. This caused THQ Nordic to trend on Twitter. Certain people took things a step further, though, attempting to get business relations disrupted between THQ Nordic and platform holders Sony, Nintendo, and Microsoft.

Even after THQ Nordic’s PR manager, Phillip Brock, apologized across multiple tweets, certain people were still intent on trying to ruin the business.

Founder of the Video Game History Foundation, Frank Cifaldi, made multiple tweets on February 26th, 2019, trying to use inflammatory inveigles to get Nintendo, PlayStation, and Xbox to drop THQ Nordic altogether. Cifaldi stated…

“The THQ Nordic promotional link to 8chan is still up, there is official PR linking you DIRECTLY to drawings of sexualized children. Surely every video game platform is ending any business association and pulling all their games, right?

“It is every journalist’s responsibility, right now, to be asking these questions. What do Microsoft and Sony have to say about a publishing partner promoting this community? What about Steam? Hey how about Nickelodeon, how do they feel about this company using their cartoons?

“I don’t see a gray area here. Platform holders are literally cutting checks to a company that is currently, openly, promoting a link to explicit content featuring children. They are funding this, and continuing to partner with them is implicit approval.”

How about @Disney? These guys publish games that use your parks and characters, and their official Twitter account is linking to content featuring sexualized children. See thread above. Are you responding to this?

Hey @OriginInsider @EA y’all going to let this slide? Are you cool with being associated with this?

The Last Night developer Tim Soret hopped into the thread in an attempt to talk Cifaldi down, but it didn’t go over so well, and Cifaldi and his buddies on Twitter used the opportunity to ideologically bludgeon Soret over the head for his past support of #NotYourShield and #GamerGate.

The tweet and thread are still live. THQ Nordic has had a link to this on its Twitter all day today and kept it up, even after “apologizing.” They are actively, right now, linking their @NintendoAmerica, @Xbox, @PlayStation, @Disney and @Nickelodeon players to child pornography.

The question is, why are you so obsessed with asserting that this a voluntary move from the company while it is obviously not? What do you win by trying to kill an entire company for the actions of an employee or two? Is this the kind of world we want, seriously?

I hadnt noticed but that I think the timsoret dude was that dev that was revealed to be a gamergate supporter wasnt him? that would explain a lot at least

After being dog-piled and ridiculed, Soret took that as a cue to make his exit from the conversation, like a battered French poodle who had been mauled by a ravenous gang of steroid-fed chihuahuas.

Even still, others were against what Cifaldi was attempting to do, and attempted to call him out for trying to ruin business relations between platform holders and THQ Nordic.

So, what’s your goal with this? You want to single handedly destroy a business… Why? There’s nothing to gain here, specially because it was obviously a dumb mistake, and not something done on purpose.

Another Blue checkmark user, Kelly Ellis, came to back up Cifaldi, attempting to get Nickelodeon to pull business relations with THQ Nordic over talking to actual gamers on the 8chan gaming board.

Cifaldi trying to make the leap that loli images and uncensored comments posted across various 8chan boards equates to the THQ Nordic brand was called out by multiple people, especially those who questioned what the difference was between 8chan and Reddit given that Reddit has the same content as 8chan across various sub-reddits?

Cifaldi avoided any questions or criticisms that challenged his point of view. He also avoided addressing the fact that he was friends with Sarah Butts as recently as 2017. Sarah Butts was outed as a pedophile back in 2015, as noted in multiple pieces published on Medium and Breitbart. 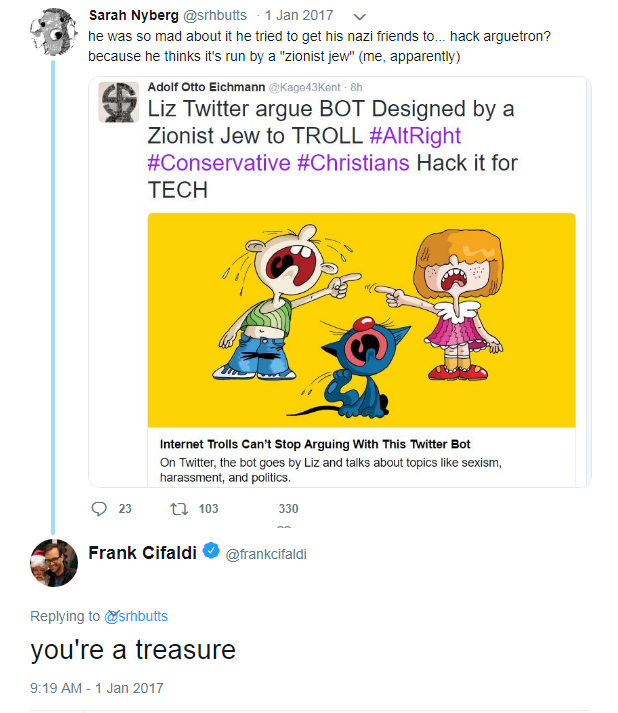 For now it looks like the ravings of someone vindictive and trying to take down a company in any way he can. Hopefully the platform holders don’t fold, as it would set a chilling precedent if a publisher was completely banned from a platform for simply talking with a group of gamers.