The PlayStation VR title from Tessera Studios and Daedalic Entertainment called Intruders: Hide and Seek is available right now from the PlayStation Store for $19.99. The virtual reality game is a psychological thriller with stealth elements, themed around the horror sub-genre about home invasion, similar to movies like The Strangers, Funny Games, and Hostages. In the case of Intruders: Hide and Seek, players are put in the role of a teenager named Ben, who attempts to hide from three mysterious invaders who have come to do some nasty, nasty things to Ben’s family.

For gamers in need of a walkthrough, there is one available covering the game from start to finish. Like most VR titles Intruders: Hide and Seek isn’t very long, but if you find yourself getting stuck or in need of figuring out a puzzle or two, the gameplay walkthrough for the PS4 thriller might be able to help you.

YouTuber Ultimate Gamerz has up a short video playlist for Intruders, covering the action from start to finish, which you can check out below.

You can start a new game or pick up where you left off by choosing to select an episode. Obviously if you’re just starting out you’ll need to start a new game, which opens up with the player hiding inside a vent, but it’s just a short cinematic of the main character Ben having a nightmare.

Another on-rails cinematic will play out, with Ben’s dad talking on the phone while players are able to look around the car, messing with the windows and the TV screen while waiting for the phone call to end.

The sequence introduces players to the family, including Ben’s sister Irene, and his mother and father.

After the family arrives at the house, you’ll need to find the flashlight to help Paul turn on the fuses. You’ll find the blue flashlight on the shelf on the right side of the garage.

Take the flashlight and press Square on the PS4 controller to turn it on.

Follow Paul through the house toward the laundry room. If you’re unsure where it is you can use the touchpad on the DualShock 4 to open up the map and see where it is in the house.

Once you get inside the laundry room, you’ll find the fuse box in the second room. Open it up and flip the switch to turn the electricity back on in the house. 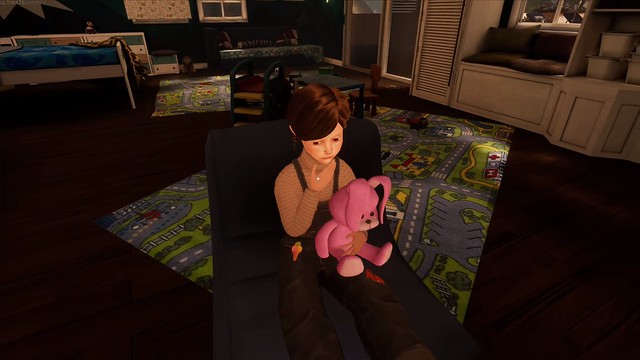 The scene will switch and Ben will be in Irene’s room, where she’ll say that “it hurts” and to go tell their father. You’ll need to head downstairs to the kitchen to alert Paul of Irene’s condition. You’ll find the location on the map on the first floor in the southwest corner of the house.

Once you tell Paul about Irene, he’ll leave the kitchen and you’ll have to set the table by putting the plates and wine on the table.

After the dinner sequence you’ll play hide and seek with Irene. Run upstairs and you’ll find a key inside the drawer on the second floor.

Additionally, the game will teach you how to enter into panic mode. When you go into hiding and the panic mode is engaged, you’ll need to shake the controller in rhythm with the heartbeat that appears on screen.

When she leaves the area where you’re hiding, head downstairs and use the key to open the door to complete the segment.

In the next segment Irene will ask Ben to come to her bedroom, and no there’s no Imolicious sub-plots that unfolds. Instead, she wants to avoid going to sleep because when she takes the anxiety pills it gives her nightmares. So take the walkie-talkie, head out through the terrace into Irene’s room, and then stealthily follow Paul down to the garage.

Hide inside the cabinet and wait for Paul to exit the secret door.

Flip the panel on the wall to go down into the secret entrance.

A cinematic will play where the intruders apprehend the kids’ mother, Jane, and go in search of Paul and the two kids.

After seeing the intruders invade the house, Ben decides to go investigate. You’ll need to hide in the cabinet inside the garage to wait for them to leave.

Exit the garage and make your way to the kitchen.

This is where the game starts getting difficult; the intruders are walking around the house and will use the flashlights to spot you. Try to stay hidden or wait for them to turn their backs to move past them. Make your way into the kitchen and try to grab the phone – the pink-haired chick will come into the kitchen to take the phone, so hide in the cabinet.

When the pink-haired chick, Ashley, leaves the kitchen proceed to exit from the cabinet and head downstairs to the cellar area. The cellar door is locked but you can get into the room by heading into the air vent in the adjacent room.

There’s a lengthy interactive cinematic where Paul gets beat up by the large brute named Mike. However, Paul doesn’t tell Mike what he wants. When Mike and Ashley leave the cellar, Ben asks his parents what he should do; they tell him to head back upstairs and get the laptop to call the police.

Sneak around to the study on the first floor in the northwest corner of the map. The corner room has the laptop on a table, activate it and Irene will suggest to head to the library.

Head into the library and go upstairs to the second level. In the corner of the room the book Paradise Lost is on a table. Pick it up to retrieve the password for the laptop computer.

Head back downstairs into the study where the laptop is located and activate the laptop to use the password.

You can read the e-mail, check the images or look at the files folder. Open the mail program and compose a message to the police. Ashley will intercept the message, though. Go hide inside the cabinet.

Wait for Mike and Ashley to leave, and then Irene will tell you that it hurts a lot and will want the pills from her room to help alleviate the pain. Head to the second floor near the lower east side of the house to reach Irene’s room and get the pills for her.

When you reach her room the antler man will come into the room. Hide inside the toy house to avoid being spotted.

Mr. Antler will take the pills and leave the room. You’ll need to follow him through the bedroom and out into the hall. Be sure to sneak, otherwise he’ll hear you.

He’ll make his way back downstairs and you’ll need to keep following him, but you won’t be able to get the pills. So you’ll need to head back down to the cellar and talk to Paul to find out if there’s a solution to help Irene get her pills while avoiding the three intruders.