Media outlets such as Comicbook.com, The Independent, GQ.com, CBR.com, Daily Express, Screen Rant, The Mirror, Bleeding Cool, and The Mary Sue are all purporting that Captain Marvel, the upcoming blockbuster from Marvel Studios, is being reviewed. There’s only one problem: there are no reviews.

Since the movie isn’t out yet there’s nothing for users to review. However, this little conundrum hasn’t stopped websites from misreporting a fact that doesn’t exist: that users are somehow review bombing Captain Marvel.

It seems to have started with Screen Rant and ComicBook.com, both of whom published articles on February 18th, 2019, decrying fans “review bombing” the movie.

“A quick look at the audience reviews page for Captain Marvel over on Rotten Tomatoes has been flooded with negative, angry “reviews” of the film and while there are some genuine comments noting excitement for the film, most have an unsettling common theme: anger about Captain Marvel being centered around a female hero.”

Screen Rant had no love loss for fans, either, with a headline titled “Trolls Are Already Review Bombing Captain Marvel on Rotten Tomatoes”, writing…

“A peek at Captain Marvel’s Rotten Tomatoes audience reviews reveals a slew of hateful comments left not just about the film but also about Larson herself. Most of the trolls’ comments are about Larson being a vocal feminist and how this movie pushes feminism to the forefront of the MCU. Because of this, they assume that the movie will ruin the franchise – with most of them announcing that they won’t be watching it in theaters. Obviously, one could argue that people expressing these opinions before Captain Marvel has even been released to theaters had no intention of ever seeing it to begin with.”

Screen Rant actually gives themselves away. They might be “hateful comments” but that’s all they are.

The comments are being corralled into the “Review” tab but they aren’t actually reviews. Before a movie releases – and in this case, Captain Marvel isn’t due out until March 8th, 2019 – the only thing you can do on Rotten Tomatoes is leave a comment and rate the movie with a “Want to See It” or a “Not Interested”.

At the time of writing this article, there are seven pages with people discussing the film, giving their reasons why they will or won’t see it, but one thing is clear… they aren’t reviews, just comments. 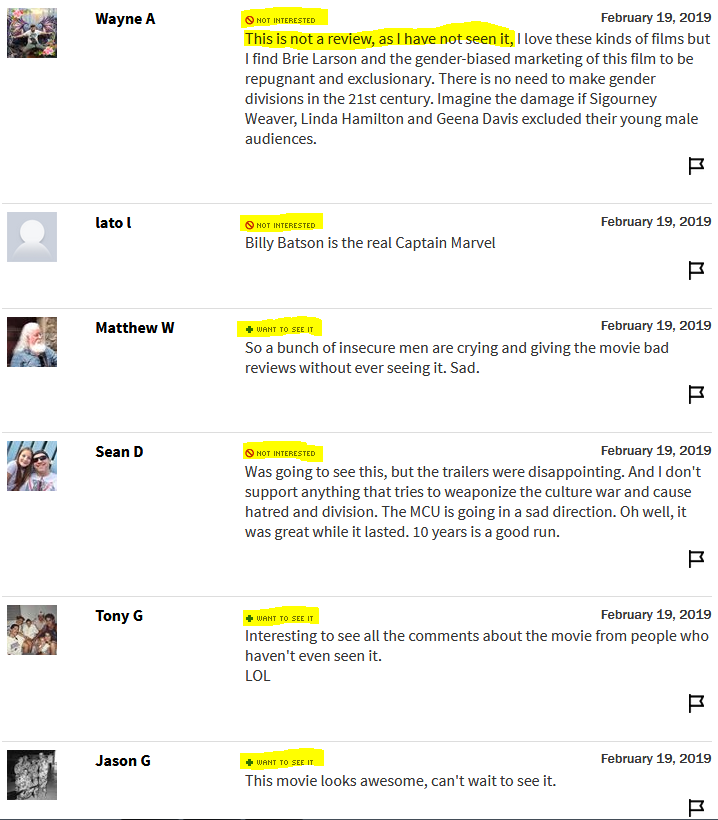 In a rush to demonize audiences who aren’t interested in seeing the film, media outlets proclaimed that the comments left by potential filmgoers were “reviews”, and thus predicated to them actions and consequences that never happened.

After committing to the canard, other media outlets followed suit, not bothering to check if the story was true, with plenty of websites playing follow the leader, many of which also avoided actually including any of the comments on the site since, well, they weren’t actually reviews. 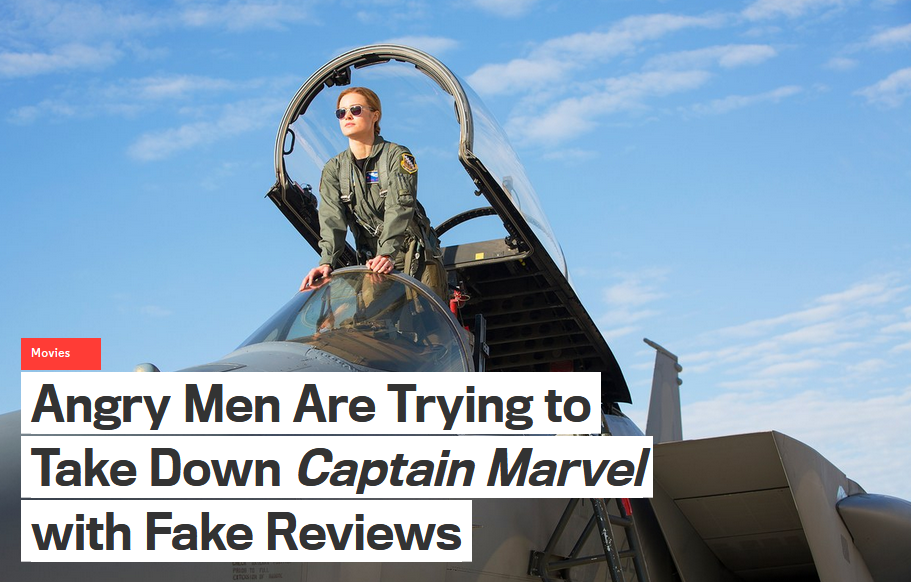 Sites like TV Overmind didn’t even bother checking Rotten Tomatoes to see if what they were writing was even accurate, with Brian Hadsell stating…

“As soon as reviews and scoring of the movie opened up on website across the internet, these trolls flooded them with vehemently negative reviews in a naked attempt to trick people into not seeing it.”

This could be a compelling argument if the reviews on the site have actually opened up. That doesn’t happen until March 8th.

The worst part about it is that all of these articles are right there at the front of Google in the top news carousel when you search up things like “Captain Marvel Review” and “Captain Marvel Review Bomb”, giving people a false impression that the movie is preemptively being review bombed even though user reviews on Rotten Tomatoes haven’t gone live yet! 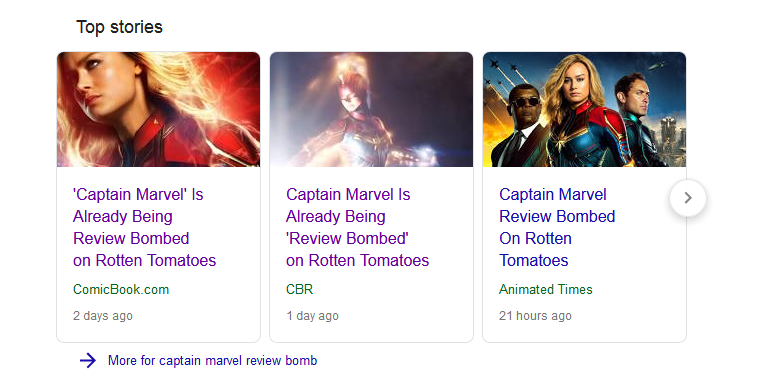 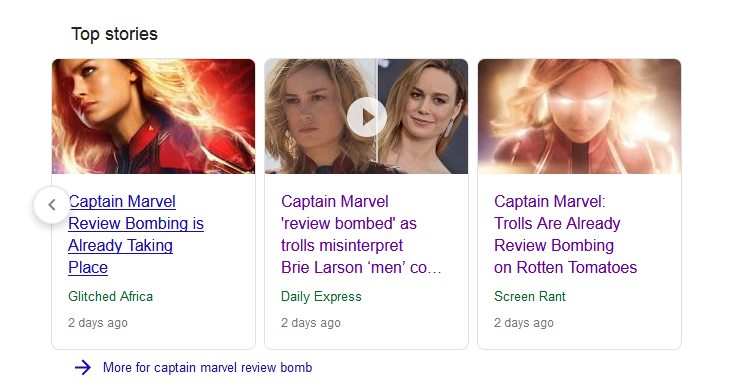 As mentioned, these sites conveniently manage to avoid including the actual comments into the articles, otherwise it would be pretty clear that user reviews aren’t enabled yet, and the review section is only filled with pre-release comments. It’s the equivalent of taking comments from a One Angry Gamer article on Captain Marvel and broadcasting that the negative comments are “reviews”.

However, it fits in line with the media’s agenda to promote Captain Marvel as some kind of cinematic marvel (pun intended). In fact, Rotten Tomatoes did an editorial celebrating the movie based on positive reactions to early screenings.

The narrative is already set, even though what the media is running with right now is based entirely on falsehoods.

Luckily, early comments haven’t forgotten about Brie Larson’s anti-white male screeds and they’re holding her accountable for that. If enough film goers stick to their guns and avoid falling into the fanboy trap, they might be able to make a dent in the box office come March 8th.

(Thanks for the news tip Mugen Tenshin and Skullomaniac)