[Update 2/16/2019:] Roblox announced that they have reinstated Pewdiepie’s account.

[Original article:] PewDiePie was permanently banned from Roblox after live-streaming the game recently as part of his fight against T-Series to keep his sub count higher than theirs. But that’s not the real news, the real news is that anyone uploading content related to or even mentioning PewDiePie’s name are facing account terminations in Roblox. 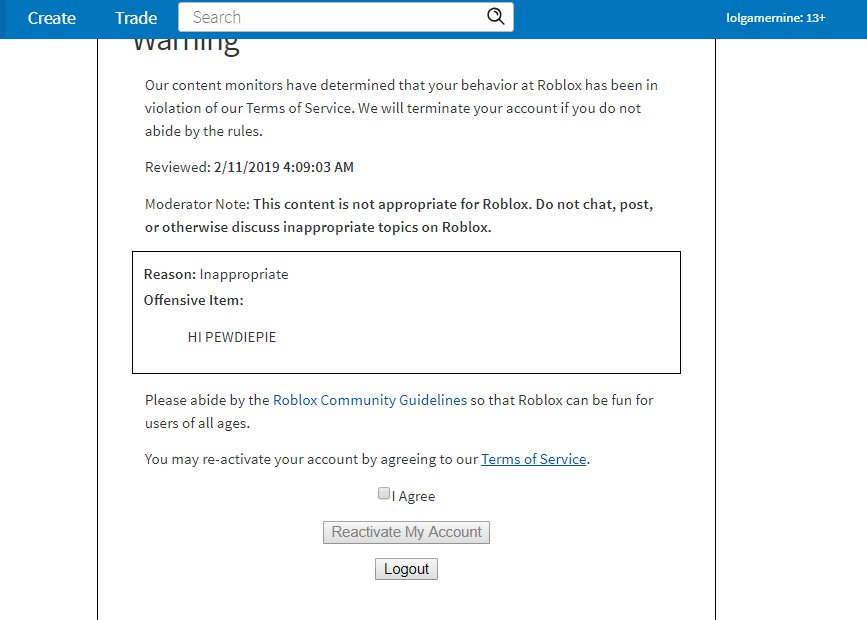 Dextero did an article about PewDiePie being banned from the service shortly after doing a clean live-stream of the game to raise his subscriber numbers. The reason for the ban was actually announced back on January 9th, 2019 by a Roblox staff member who explained why PewDiePie wasn’t allowed on the platform anymore, writing…

Some users pointed out that this contradicts the Roblox terms of service, which they claim that the company isn’t responsible for third-party websites.

@Roblox banned @pewdiepie and quite frankly im dumbfounded at the amount of hypocracy this site has degraded to. I will be making a video about this soon. I suggest Tubers and CC’s start taking a stand and letting ROBLOX know that they are doing wrong. pic.twitter.com/Vx292uPTLM

However, if you actually check the Roblox terms of service, they note that for the third-party services they provide, they’re not responsible for whatever are on those sites…

So it doesn’t necessarily preclude users from being banned for third-party sites they link to, it’s just that Roblox has mentioned that they’re not responsible for whatever is on third-party sites related to their own service.

As noted in PewDiePie’s video, after handing down the ban on PewDiePie’s account, other users were also facing account terminations for mentioning PewDiePie in the game or uploading any kind of content relating to the popular YouTuber.

A couple of screenshots were featured in the video highlighting the people sent warnings about their accounts facing terminations for uploading the content, and some users are still facing those warnings.

Users have been posting up their warnings that they’ve been receiving for mentioning PewDiePie in Roblox.

made a roblox account about pewdiepie and uploaded pictures of his profile jsut for a test and this is my result after 3 hours pic.twitter.com/M3OADPO7Ri

OMG ROBLOX look, i met pewdiepie yesterday on bee swarm simulator, greeted him #pewdiepie @pewdiepie #roblox @Roblox, it was before the rule was added
but i only got my acc disabled not terminated. it’s real check herehttps://t.co/TECPi6fztc pic.twitter.com/NB39OknY0K

Others pointed out that there is a lot of hypocrisy being exercised by Roblox over the situation, especially since most people noted that PewDiePie didn’t do anything inappropriate during his live-stream while playing Roblox.

So roblox banned pewdiepie but then there’s stuff like this everywhere pic.twitter.com/c9be8ujFfo

That’s not to mention that back in 2015 Roblox was happy to have PewPieDie on the platform before there was a media campaign to demonetize and destroy the reputation of the YouTuber by mainstream media outlets like the Wall Street Journal.

At the end of the day, I would imagine that Roblox probably needs PewDiePie more than PewDiePie needs Roblox. But it seems like a pretty draconian step to start suspending accounts and threatening account terminations just for mentioning PewDiePie or making servers named after the popular YouTuber.