The news about the latest update comes courtesy of a tweet that was posted up on February February 16th, 2019 indicating that there will be 67 new parts in the character creation, 17 new battle songs added from SoulEdge and 11 songs from the original SoulCalibur.

There are a number of new upper body pieces, head accessories, lower body parts, and all sorts of other customization gear being made available in the game.

However, the real heart-thumping aspect of the news is that the DLC will include Yamatogawa’s outfits, which are basically little more than crotch and nipple coverings for the girls with all sorts of dangerous looking decorations adorning every other part of their body except the naughty bits. You can check out the tantalizing outfits as they’ll appear in SoulCalibur VI with the screenshot below. 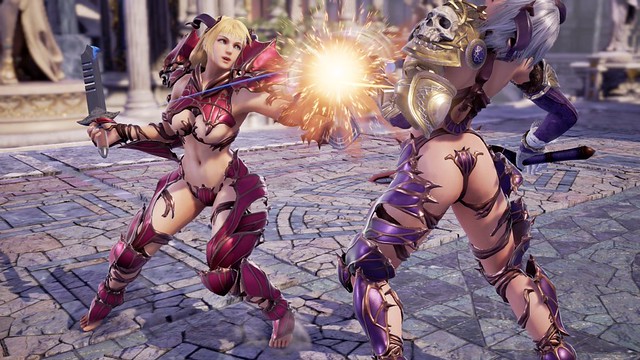 In addition to the customization pack being released on February 19th, Eventhubs is reporting that during EVO Japan’s top 8 finals for SoulCalibur VI, producer Motohiro Okubo also revealed that a new character is joining the roster and it’s none other than Raphael’s adopted daughter Amy.

The reveal was accompanied by a trailer highlighting her moveset and her appearance in the newest iteration of the series. You can check out the trailer below.

Amy is sporting the Gothic lolita-getup, so fans who like that kind of aesthetic will be pleased.

Much like Raphael, Amy uses the rapier to perform lots of quick pokes and stabs against her opponents.

We don’t know exactly when the DLC will be available but Amy will be part of DLC pack 4. Just for reference, the upcoming customization pack is DLC pack 3, so it will be a ways off before you get your hands on Amy.

SoulCalibur VI is available right now for the Xbox One, PS4, and PC.

(Thanks for the news tip Cheddar Croissant)