Funimation voice actress and Saiko Studios head, Samantha Inoue-Harte, was discovered to have been involved in a SWATting hoax. According to some internet sleuths, they managed to uncover the plot to smear supporters of anime voice actor, Vic Mignogna, who has been tarred with allegations of misconduct.

“[R]eactivated Facebook. Ugh. Vic’s fans were just extra terrible yesterday. Got tired of their constant victim blaming and their hate.

“I just can’t deal with it when people suggest threats of violence towards me. Repeatedly. Especially while I’m still recovering from being sick.”

On February 18th, 2019, Harte posted now deleted messages on Facebook claiming that she had been SWATted, and blamed Vic Mignogna’s fans for the incident.

“Thanks Vic. Your fans are victim blaming Assholes.

“Spend most of the morning fixing my door frame and replacing the door.

“I’m fine. Just pissed. It was at my rental house, not the one I live in daily.”

Fellow Funimation voice actor, Sean Schemmel, who is known for voicing Goku in Dragon Ball Z, also chimed in with his support via Twitter.

However, it turned out that it was all fake.

On the evening of February 18th, 2019, Twitter user ChambersofHeart posted up screenshots of the evidence, showcasing that the SWATting incident actually occurred back on August 19th, 2016.

ChambersofHeart also posted the message from the now private Facebook page where Harte had explained what happened on the morning of August 19th, 2016, where she wrote…

“So this happened early this morning. Williamson county police battering rammed my front door before dawn.

“I wasn’t there. But they knocked loudly on the door close to 3am and when the family woke up and went to answer the door, the police proceeded to ram the door open even though the family and kids kept saying that they would open the door for them.

“When the police came in, they aimed their guns at the family and searched the house.

“Police informed me that they had received a call saying that there was a burglary in progress in my house.

“So rather than knock on the door and let the family living there answer the door like civilized people, police rammed the door in. The family allowed the police to come in and brewed them coffee. But when the police were asked if they would pay for the damages the response was that they had “reasonable doubt” that there was a burglary going on.

“So yeah….getting a new door installed tomorrow morning at 8:30am…have to replace the door jam and the door.

“If I find out who made that call I am going to go Medieval on their behinds. Nearly $420 for a new door….and paying for door jam and contractor is making it close to $800 that I didn’t plan on shelling out because of someone making a false call.

“Police came by at 8:30am to drink more coffee and to apologize….but apologizing doesn’t replace a broken door.”

YouTuber Memology 101 also did a video with the images of the Facebook posts and of the door from 2016 to basically piece it all together within the span of a two minute video.

About an hour after the tweets went live pointing out that the SWATting was a hoax fabricated by Harte, the voice actress proceeded to delete/private her Facebook posts and privatize the account.

[Update 2/20/2019:] According to a tweet from House of Tath, a police report confirms that there was no SWATting that took place at Harte’s house.

Police report verifies that Samantha Inoue-Harte was, in fact, NOT swatted. Her door was damaged by an un-ID’ed person. Seems fair to assert she may have very well done this herself given the initial claim was horribly false. #IStandWithVic
Source: https://t.co/HPcfAUGmnK pic.twitter.com/sFm4RubDhb

The police report showed that it wasn’t law enforcement that kicked down Harte’s door but rather “persons unknown”. 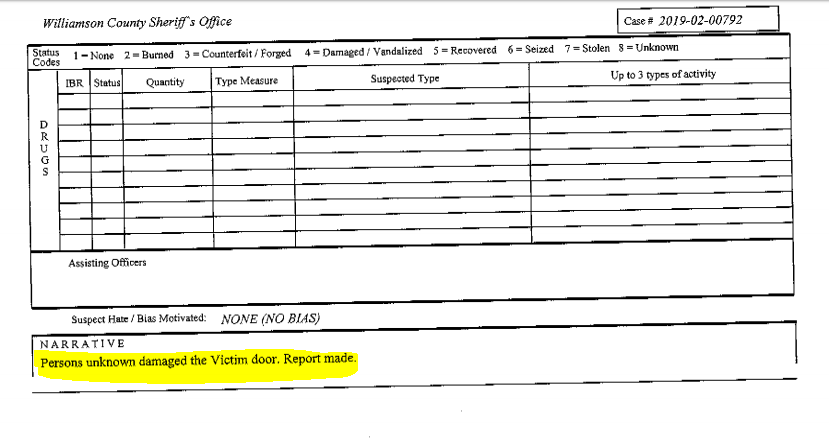 While that in itself was a doozy, the real news was that Samantha Inoue-Harte was also supposedly involved with helping Funimation with their investigation into Vic Mignogna, which ultimately led to his firing.

This was originally revealed in a tweet posted up on Kaylyn Saucedo, also known as “MarzGurl”, an internet anime personality. The tweet was posted on February 18th, 2019.

I highly suggest you read the account of one voice actor who took part in Funimation’s investigations.https://t.co/HhuJIJMedT

However, Saucedo conceded in a follow-up tweet later in the day when it was revealed it was all a hoax that she was disappointed to find out that the story about the SWATting from Vic Mignogna fans made by Harte was fake.

I knew because that post said she did. Mind you, it’s frustrating because her post about the SWATting was fraudulent. I am upset.

Of course, the revelation that Samantha Inoue-Harte had fabricated a story in order to make Vic Mignogna and his fans look bad called into question the veracity of her contributions and involvement in Funimation’s internal investigation that resulted in them firing Mignogna.

This also led supporters to instantly call into question whether or not Harte’s involvement with the investigation was purposefully done to sabotage Mignogna’s career.

I did reach out to Funimation to ask if they would be conducting a second investigation now that the information has come to light that Harte fabricated the story about the SWATting taking place at the hands of Mignogna supporters. At the time of publishing the article they have not responded. However, if they decide to respond the article will be updated with their response.