The media has spent the last seven years hammering home the point that men shouldn’t find sexualized depictions of fictional or non-fictional women attractive. They’ve launched attacks on creators anytime they include women with deep cut-cleavage, high-skirts, heels, and big boobs or long legs. Well, this kind of subversive social engineering has had a rather significant impact on how different gamers view the females in Mortal Kombat 11, which has created a back and forth debate between YouTubers and gamers, as they argue about what is and is not acceptable sexualization in fictional media such as Mortal Kombat 11.

It started when Social Justice Warriors like Twitter user 9Volt and YouTuber Jim Sterling mocked the idea of “Boner Culture”, generating a lot of feedback from Left-wing journalists, content creators, and e-sports commentators to hop in and mock gamers for enjoying the sex appeal of the female characters in previous iterations of Mortal Kombat.

Won’t somebody please think of the boner culture!? pic.twitter.com/mOBnsgAnQE

Memes aside, there’s actually gamers who are disturbed at the new female designs in Mortal Kombat 11, all of whom are covered up practically from head to toe, and completely opposite of the designs that they sported from Mortal Kombat 3 all the way up to Mortal Kombat X.

The most sexed up outfit on the female side so far would probably be Sonya Blade’s workout outfit, which is a throwback to Sonya’s outfit from Mortal Kombat 3. 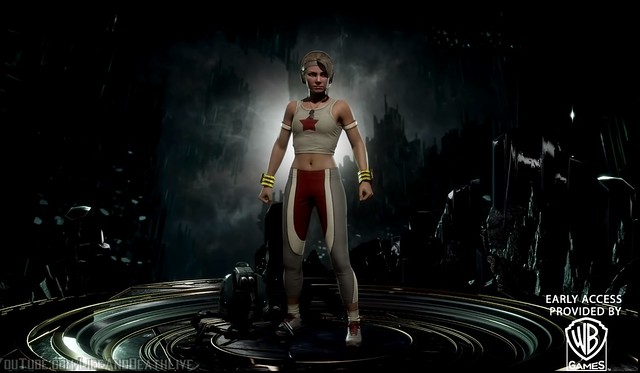 While it was a given that game “journalists” would despise any kind of sexuality and would applaud the females being wholly covered up while the men show plenty of skin, the Mortal Kombat sub-reddit has gone out of its way to silence a lot of the opposition to NetherRealm Studios’ new direction, or attempt to bury the conversation altogether.

Most of the threads receiving the most upvotes are from those justifying why the women have to be toned down, with one user in a thread asking about sex appeal, writing…

“The fact of the matter is, which people who prefer the MK9 designs need to understand, is NRS simply doesn’t want all of their female characters designed that way specifically anymore.

“They’ve moved past it, and the chapter is over. They want their female characters to stand out more on their own identity and personality like the male characters, not all having similar clothes and design philosophies. […]

“[…] Female characters don’t all need to expose cleavage and wear little clothing. It doesn’t suit a lot of characters, and their personalities which NRS are defining. A character like Mileena, exposing herself makes sense. Kitana or Sonya doesn’t.

“Male characters conversely, don’t all need to be macho buff dudes with their shirts off. In fact, you can easily tell they are slimming down some of the male characters and covering some up as well. People just don’t make a fuss about this because… well, they’re male characters. It doesn’t bring as much attention but it’s not like NRS is only covering and altering female characters.”

Actually, this is incorrect.

Most of the male characters on the Mortal Kombat 11 roster have some sort of shirtless variation to hone in on the sex appeal, and they are still plenty buff and quite ripped, as you can see in the screenshot below.

Each of the men seem to have a shirtless or chest-baring alt, but in the outfits revealed for all the women, they completely forgo any sort of cleavage.

Some people have argued that we just have to wait for NetherRealm to reveal more gear pieces and that eventually (maybe) some of the gear pieces for the females might contain some kind of sex appeal.

To no one’s surprise there haven’t been any complaints from Left-wing media outlets and Centrists™ about NetherRealm Studios giving the men sex appeal. However, anyone who complains about the lack of female sex appeal is shouted down or called a “creepy” pervert, as outlined in TuYasRecords‘ video about the topic matter.

Not every YouTuber agrees with that kind of assessment, though, we have others on the opposite end of the spectrum decrying the overt coverage that the females have received in the game, with YouTubers like YellowFlash decrying NetherRealm’s art direction that sees the men retaining an element of sex appeal while the women are stripped of theirs.

There are still people in the comment section justifying why the women can’t have sex appeal, or why not showing any skin is a good thing.

People like Timed Revolver claim that this is just NetherRealm growing up, and that making the women more “realistic” makes them look unique. 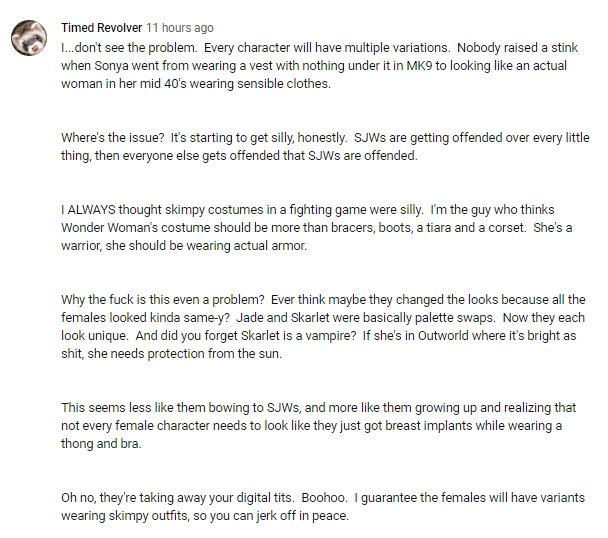 It’s a common argument that completely side-steps the issue that there can be a happy middle ground. While Mortal Kombat X provided the women with more coverage, it still gave them plenty of opportunities to bare skin as well, something that’s not even remotely present in Mortal Kombat 11, save for, again, Cassie Cage’s workout outfit.

Others like Darin Conard dismissed the idea that Mortal Kombat 11 has gone “woke”, claiming that no censorship has taken place.

NetherRealm did have to tone down their female designs in Injustice 2 due to requests from the higher-ups. Even things as simple as cleavage and booty-shorts had to be nerfed, according to one of the artists working on the game. This was covered in a video by Censored Gaming.

Not everyone agreed with Forge Labs in his assessment of the situation, though. Some reversed the argument, claiming that since the game takes place in Outrealm, why can’t the women be sexy and more fantasized than what we have in real life?

Others decided to get a little more proactive, making a counter-video to the claims that Jade shouldn’t be sexualized because she’s undead.

Many people pointed out that plenty of undead characters have been sexualized in media and video agmes, including the chick from the iZombie series, or the two leads from Interview With A Vampire, or heck, even Edward Cullen from Twilight.

YouTuber The Edgy Penguin actually questioned why it’s so wrong to have female sex appeal in a fighting game like Mortal Kombat 11, especially based on the series’ history?

It’s a counterpoint that’s rarely ever addressed, especially when you consider that the male sex appeal is still well and in tow, even based on the little that they’ve showcased of the game so far.

There were even some gamers who felt that getting “salty” over clothing attire was fruitless, and disparaged the idea of wanting sex appeal for the female characters in Mortal Kombat 11.

What’s interesting is that YouTuber ReSe IamSimba claims that the comments from users asking for more sex appeal otherwise they won’t buy the game is a “truly awful” comment, even though there doesn’t appear to be any pushback from people willing to buy the game for more gore and violence. One must question why one is less acceptable in an ‘M’ rated game than the other?

The topic isn’t even being contained in reaction videos or Reddit threads. The discussion about sex appeal has spilled over into completely unrelated videos, like the one from Life And Death covering the costumes and skin variations in Mortal Kombat 11, wherein an argument broke out over the sexualization (or lack thereof) for the female characters.

Then there are those who agree that the female characters are being de-sexualized, but hate the way the argument is being framed, claiming that the only way developers will listen is if you approach the topic in a way that is respectful, with YouTubers like Appabend finding the discussion from the anti-SJW side deplorable because SJWs are mocking things like “Boner Culture”.

Not to dive off on a tangent, but no longer being a dick on OAG is as likely to happen as straight, white, MAGA-hat wearing males attacking Jussie Smollett for being a gay Leftie; it’ll never happen.

Anyway, people are triggered over “Boner Culture” because a professional tweet-spammer by the name of 9Volt managed to bring industry awareness to Boner Culture, and someone at the Daily Dot wrote an article about it, putting more eyes on a very serious topic of Boner Culture… or rather, the de-sexualization of females in media.

What’s funny, though, is that when female gamers speak up about the issue they get shouted down or completely ignored. For instance Dark Titan Enterprises did a video about Jade being toned down and game journalists and activists completely skipped over her commentary. Warner Bros., and NetherRealm also stayed silent about how she felt about Jade losing all of her sex appeal in Mortal Kombat 11.

Few other people seem to want to address the point brought up in the video above about Jade no longer being as sexy as she used to be, otherwise they feel as if they come off as no longer being able to sit at the cool kids table among SJWs. It also speaks volumes that a female YouTuber had to speak out on behalf of female sex appeal rather than men, which seems to show who wears the pants in some corners of content creation culture. Although, to be fair, LowTierGod was one of the few members of the FGC to criticize Jade’s lack of sex appeal.

However, YouTubers like Vee were brazen enough to challenge that status quota by tackling the topic head-on, asking why is it okay to mutilate and decapitate women but it’s not okay to see them in string bikinis? And why is it okay that we have games set in fantasy magical universes with thunder gods and manipulators of ice, but the appreciation of decolletage is verboten?

Part of the problem with the argument is that it seems to be lost in an unwillingness from the sex-negative crowd to address the very obvious question posed near the top of the article: WHY is it okay for men to show skin in Mortal Kombat 11 and not the women?

A few good faith commenters might retort that new gear pieces could solve this issue (and for the sake of Boner culture, let us hope this is true), but others would rather dance around excuses and straw men about everything other than the topic at hand. Besides, having an alternative costume isn’t demanding that all the women prance around in thong bikinis and stripper heels. When did options and variance become evil?

James Howard in the comment section of the Appabend livestream seemed to sum it up perfectly.