Author Kosoko Jackson has requested his publisher to withdraw the release of A Place For Wolves following complaints from Social Justice Warriors.

The news comes courtesy of a tweet that Jackson issued on February 28th, 2019, where he apologized to the young adult community for the surrounding story material featured in A Place For Wolves. The novel is historical fiction about gay black boys caught up in the Kosovo war and the Albanian genocide that took place back in 1998. Social Justice Warriors felt it insensitive to make a fictionalized portrayal of gay blacks in Kosovo while Albanians were being genocided, as they felt that the gay blacks’ story ranked lower on the Progressive Stack than the Albanian Muslims who were massacred.

From me to the Book Community: I’m Sorry. pic.twitter.com/sFXQAlQCk9

Kosoko wrote a simple apology in the tweet’s header, but had a more detailed apology attached via an image. If you’re unable to view the image, it reads…

“To the Book Community,

“I want to thank everyone who brought to light the problematic representation and historical insensitivities in A Place For Wolves. From the bottom of my heart, thank you all for reading and for sharing with me how my words hurt you—especially the Muslim readers who put themselves out there to help me learn.

“I wrote A Place for Wolves with three goals in mind:

“1. To put queer boys of color in the center of a story, as more than just characters where their sexuality and race were the only thing of value

“2. To write a historical thriller that brought a lesser-known conflict to the forefront of people’s minds

“3. To create a story that showed both good and bad exist inside of a conflict

“I only succeeded in the first goal. I also see that my first goal was my primary goal—I so wanted to create the hero that I longed for as a teen reader. It is clear that this focus was at the expense of the other goals. I failed to fully understand the people and the conflict that I set around my characters. I have done a disservice to the history and to the people who suffered. Because of this, I have asked my publisher to withdraw A Place for Wolves from publication.

“As a young adult author, an avid reader, and a champion of other authors, I understand the responsibility that comes with introducing readers to certain topics. As such, it’s important that all topics, but especially those rarely discussed that are a painful part of a group’s history, are handled with respect, care, and sensitivity. It’s clear I didn’t do that in A Place For Wolves. I have been critical of others’ missteps, so it is with great humility that I recognize the issues in myself and my own work.” […]

This was corroborated by Jackson’s publisher who acknowledged the withdrawal on Twitter.

Due to the online discourse currently surrounding his novel, author Kosoko Jackson has asked that we withdraw publication of A Place for Wolves, and we have agreed. Please read his statement below. https://t.co/6KhsZS1DcM

The apology came after Social Justice Warriors began ripping the book a new one on the Good Reads review site, with the complaints being centered around an Albanian Muslim professor in the book being depicted as a villain, and that the Kosovo backdrop was insensitive.

Hey y’all. I take full accountability for my recommendations and I f*cked up. To all my friends that have been hurt, or could have been hurt by the words in A PLACE FOR WOLVES, I sincerely apologize for recommending it, and missing the issues present

I’m seeing A Place for Wolves pop out a lot around my TL today. I can’t/won’t get into discussing the setting of that particular war for personal reasons, but I will say this: it’s all the perfect example why sensitivity readers matter—even if a story is #ownvoices in some ways.

Essentially the Twitter mafia and social media Schutzstaffel came down on Jackson for writing fiction themed around a real-life event many people outside of Southeast Europe weren’t very aware of. In the minds of Social Justice Warriors, even if you’re gay and black you still have to consider the feelings of people on the Progressive Stack that are more oppressed.

This kind of absurd silliness even managed to catch the attention of Left-wing activist Jesse Singal, who found himself calling out the behavior of Social Justice Warriors.

Update: “A Place for Wolves” has been CANCELLED. A month before its publication date. Genuinely curious how many times publishers are going to put up this this. pic.twitter.com/yWAIRiBAWY

Jackson is no saint, though.

Even Singal pointed out in his article that Jackson helped partake in the Amelie Zhao controversy earlier this year where the Chinese young adult author initially cancelled the release of her novel, but later announced it was postponed following attacks from the Social Justice Twitter mob. In an article published on Reason, Singal wrote…

“Earlier this month, during the Zhao controversy, Kosoko accused an account named KidLitCon of having retweeted an “attack on”—read: a pointed but civil and informed disagreement with—Elle McKinney, another big-name YA author with a social-justice bent. […]

“Thanks to pressure from Jackson and others, the “keys” to KidLitCon were taken away from one of its co-owners, a woman of color who authored the tweet questioning McKinney, and full control was given to a white woman with the “correct” stance on the Zhao controversy:” 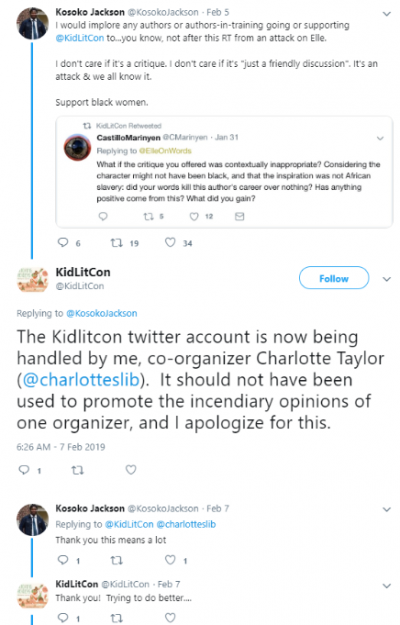 Basically, the sword that Jackson helped sharpen on the whetstone was used to pierce the very heart of his budding career.