The eighth generation of gaming has been one of the worst generations in the history of gaming, not because of graphics or sound or production budgets, but in terms of the fun factors being worse than games made a generation ago (and that’s not even to mention things like censorship, the microtransactions, loot boxes, and anti-consumer practices, but I digress).

In fact, 12 years ago Crackdown 1 came out for the Xbox 360 and it not only has graphics equivalent to Crackdown 3 on the Xbox One (and in some cases it actually looks better), but a comparison video reveals that the 12-year-old title has better physics, better enemy AI, more dynamic gameplay mechanics, better vehicle damage, and more animations than its eighth-gen successor.

There’s a 15 minute video revealing that after five years of development and all the promises of how great the power of the cloud is, Crackdown 3 turned out to be a huge disappointment. You can check out the video below from Crowbcat.

The video covers the comparison between the two games. Visually if you’re not paying attention it’s easy to get them mixed up since they visually look about the same, which is a shame for a console like the Xbox One since in some ways Crackdown 1 actually looks better than Crackdown 3.

The video outlines how the physics in Crackdown 3 are pretty stiff, unimaginative and stilted. For instance, you can’t kick and move vehicles with melee attacks with the same kind of fluidity and dynamism as Crackdown 1.

Driving the vehicles into objects in Crackdown 3 reveals that they don’t react to the crashes and the vehicles don’t have dynamic damage like in Crackdown 1. Also, picking up vehicles looks a lot better in the 2007 outing, too. 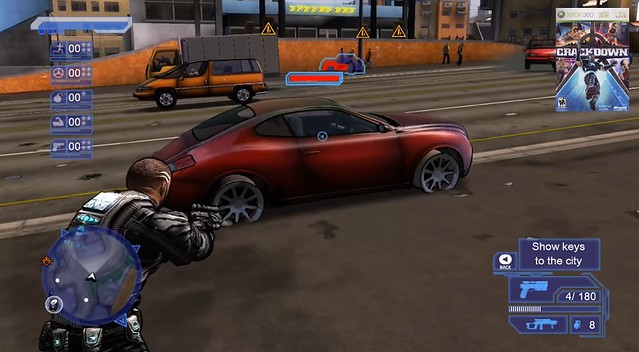 You can also shoot out the vehicle’s tires in Crackdown 1, which causes the cars to spin out and flip over, where-as in Crackdown 3 they just kind of swerve around and then keep driving.

The ability to shoot at different parts of a vehicle for different results doesn’t just apply to vehicles in Crackdown 1. The game also allowed you to shoot the weapons out of the hands of enemies, which would force them to drop their gun and either have to go pick it up or engage in melee combat.

You see that with the Kynapse AI middleware from Autodesk allowed the AI to dynamically adapt and react to the player’s actions, keeping things feeling fresh and intense, where-as in Crackdown 3 the AI is retarded and they don’t properly react to the player, nor are they smart enough not to get pushed off to their death while firing aimlessly in the general direction of the player.

Then we get into things like the explosions and world reactions in Crackdown 3 compared to Crackdown 1…. they’re objectively worse.

In the original 2007 outing when players jumped and landed on the ground the world shook and the vehicles rocked and shook from the impact. Nothing moves when you smash the ground in Crackdown 3.

The explosions in Crackdown 1 were also massive and impactful, and – once again – the world reacted to the effect in a visually significant manner. This is all missing from Crackdown 3.

Vehicle transformations are also worse in the third outing. Despite being in development for five years and having come out 12 years after the original, Crackdown 1 sports some really awesome custom vehicular transformations for each vehicle you enter when your level is high enough.

The comparison reminds me of Crowbcat’s Far Cry 2 and Far Cry 5 comparison, as well as the other comparisons for Mafia 2 and Mafia 3, where in both scenarios the older games had more features, more gameplay mechanics, and better mechanics than their successors.

It should basically go without saying that the multiplayer destruction in Crackdown 3 was a huge disappointment that absolutely did not live up to the promotional marketing material.

It kind of makes you wonder what were they doing for those five years that they managed to make a game that was objectively less feature-rich than its predecessor that came out 12 years prior on far inferior hardware?