Just several days after the game officially launched on PC, PS4, and Xbox One, modders both in the West and in China have been working overtime to pump out a proper nude mod for Devil May Cry 5. I’m proud to announce that they’ve succeeded. There are nude mods available for the three lovely ladies of Capcom’s latest outing in the fast-paced, hack-and-slash action title, giving gamers an opportunity to stare at Lady’s butt all day long, scope out Nico’s tattooed titties, and see Trish in the buff without worrying about mysterious purple lights covering up her nether regions.

The first mod features Trish completely butt naked. The mod was made by Gosetsu. You can download the mod right now from over on the NexusMods.com download page.

The mod is anatomically incomplete when it comes to her nipples and genitals. However, I’m sure texture artists will fill in the details soon enough.

You’ll first need to download the Fluffy Manager 5000 from Mediafire.com. 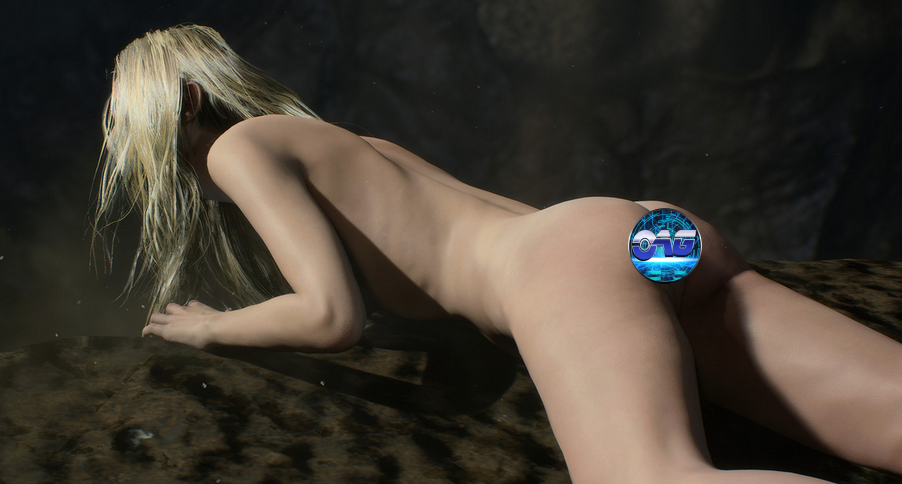 First verify the integrity of the game files in Steam.

Simply open up the mod manager and copy the Trish.rar nude mod into the GamesDMC5Mods folder.

Start the mod manager and install the naked Trish mod from within the menu. Pop open the game and you’re good to go. 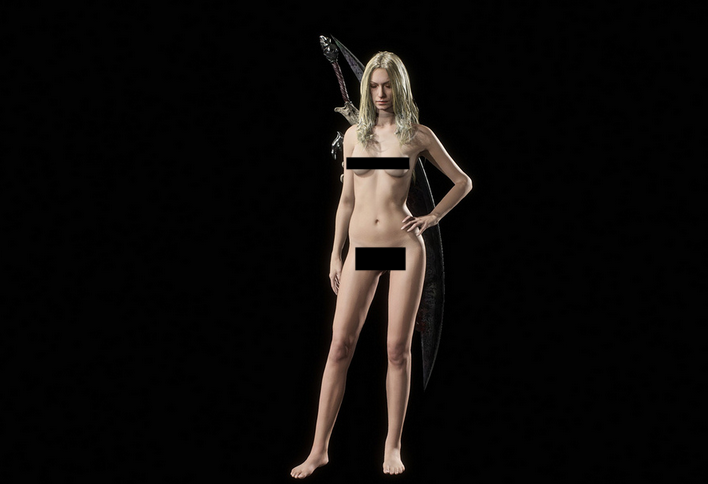 Now for the one mod you probably all came for… Lady.

Modder BombasticGoose did the work of destiny and delivered the captivating callipygian for gamers to gaze upon like they’re stuck in a trance from Aphrodite.

If the original cinematic sequence involving Lady’s bare bum had you enraptured like a male feminist finding out about the Muslim new year’s eve rape party in Cologne, Germany, then you’ll want to grab a copy of the mod from the Nexusmods.com download page.

Just like the Trish mod, you’ll simply need to open up the Fluffy Manager 5000.

Put the NakedLady.rar nude mod file into the modmanagerGamesDMC5Mods folder.

Press the “Manage Mods” button and then refresh the list so that the “NakedLady” mod appears. Enable it and then launch the game.

If the mod worked correctly you’ll be able to see Lady in all her nude glory every time she’s on the screen. 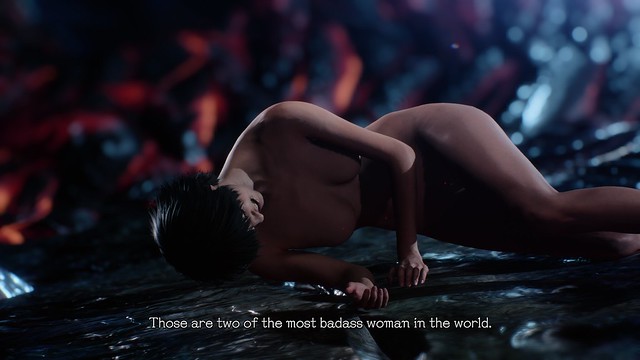 There’s also a bonus modification that allows you to play as Lady.

Yes, you’ll be able to play as Lady in the game thanks to a model swap.

FluffyQuack put together the model swap mod that replaces Dante with Lady.

The mod has a few issues, though, such as Lady using Dante’s motions and movements during the cutscenes, as well as some of Lady’s textures turning completely black during certain missions.

Also, don’t try to access photo mode otherwise it will freeze up.

Given that detractors have reported the site as unsafe, you’ll have to click on “See Details” and click on “ignore the risk” to download the file. You can see the mod in action with the video below.

Unfortunately the mod that swaps Dante with Lady is not compatible with the nude mods… yet.

This means that you either get to look at Lady every time it’s time to play as Dante, or you can only see her sporadically throughout the story but every time you do see her she’s going to be nude.

It’s not a bad sacrifice to make for now, just until the model swap mod is made compatible with the nude mods. 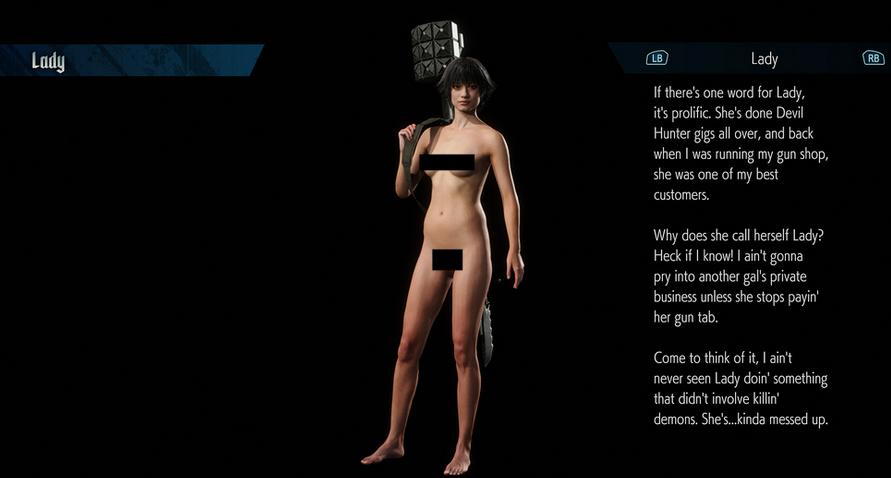 It will still take a little bit of work and time to add the proper variations of naughty bits to Lady and Trish.

One character who doesn’t need to have her naughty bits articulated is Nico.

Modder aldenalden4 took some time to share the mod, which was originally made by Chinese modder maliwei777. You might recognize maliwei777’s work on making Jill nude in Resident Evil HD Remaster among many other notable nude mods in Capcom games. He’s a legendary nude modder, and was responsible for making some incomparable nude mods for Capcom’s newer titles.

Now unlike the other two nude mods, though, Nico does have fully detailed nipples, along with a nipple tattoo that encircles her areola. 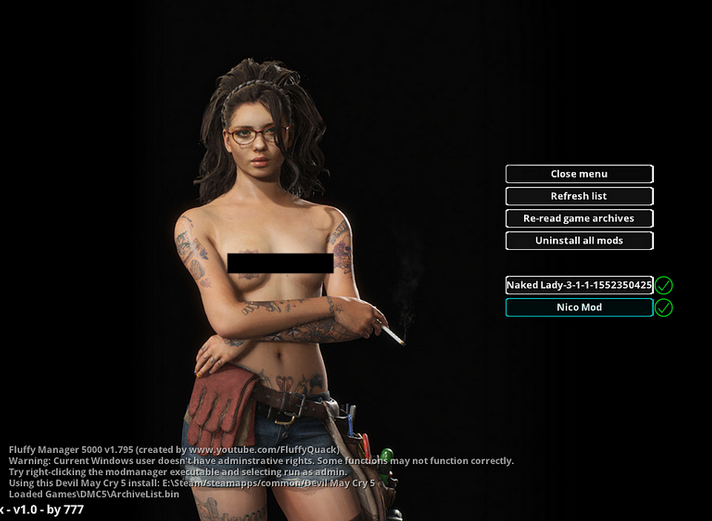 Oh, and if you’re into naked goth dudes you can download a nude mod of ‘V’ from NexusMods.com. But no one cares about that degeneracy.

Devil May Cry 5 is available right now for Xbox One, PS4, and PC, but as usual only the members of the Glorious PC Master Race will be able to take advantage of the nude mods.

PS4 gamers get it the worse because not only is Lady’s beautifully bare bum censored with the light with no way to remove those lens flare effects, but unlike the PC and Xbox One version of the game, Trish’s bare bum is also censored with the mysterious light to keep people from eyeing her lady crack. This was also the first time that a lot of people were made aware of Sony’s PS4 censorship policies.

Unfortunately this won’t change Sony’s censorship policies, leaving modders to do all the heavy lifting in order to preserve the dying art of Boner Culture.

(Thanks for the news tip Bastiaan)