Censorship reigns supreme during politically motivated tragedies that the mainstream media can use to inculcate plebeians with their own agenda. This has become rather apparent with the fact that Gab.ai’s Dissenter extension is reportedly being censored by New Zealand ISPs.

Journalist Nick Monroe has been cataloging the censorship surrounding the New Zealand mosque shooting. On March 16th, 2019 the Gab.ai account on Twitter announced that they were receiving reports that those in New Zealand were having trouble accessing the censorship-free browser extension, Dissenter, in their region.

However, even promoting the use of virtual private networks as an alternative to the Dissenter censorship won’t have much of an effect on those trying to look up information on YouTube.

If you visit the popular video sharing website, almost all of the general search results for the Christchurch shooting are filtered to show only the mainstream media’s narrative. User videos and content are completely filtered out of the results as of the writing of this article. 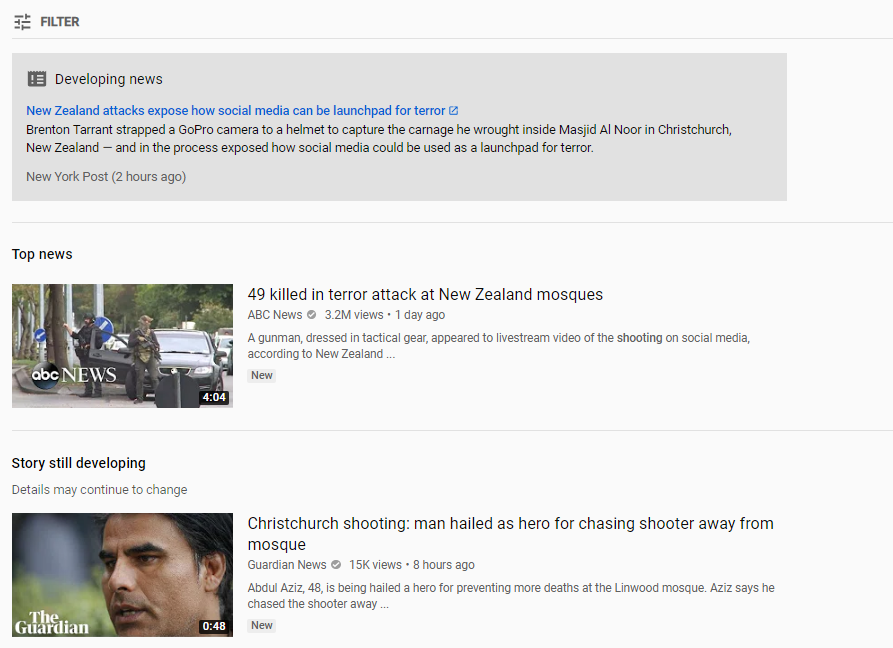 Even if you attempt to search anything after page 2, page 3, page 4, or page 5, it’s only mainstream news sources.

Some people asked about this over on the YouTube sub-reddit, noting that the search and filtering was no longer working as it should, and various kinds of videos or content creators are no longer showing up under certain search times. A YouTube representative replied in the thread on March 16th, 2019, stating…

“Just confirming that YouTube is aware the search/sorting functions aren’t working as excepted – this is temporary and part of our efforts to better respond, review and remove graphic, violative content from YouTube. Thanks for your patience while we work through this”

Reddit has also been clamping down on certain sub-reddits, completely banning longtime subs /r/gore/ and /r/watchpeopledie/ for linking to the video of the New Zealand shooting.

Nick Monroe has also reported that sites that haven’t been following the mainstream narrative, such as Zero Hedge, have also been blocked form being accessed in New Zealand.

Another report of sites like Dissenter and Zero Hedge being blocked in New Zealand, via @Bromley_86 pic.twitter.com/PFtVXgC6bF

Many other news outlets have attempted to shift the blame to YouTubers like PewDiePie, as reported by YouTuber LegacyKillaHD.

It’s not just blue checkmarks on Twitter and the perpetually offended residents of ResetEra blaming PewDiePie and gaming culture for the New Zealand shooting.

Daily Dot’s Ana Valens used the tragedy as an opportunity to hoist invective on the chan culture and #GamerGate, writing….

“It would be a stretch to say Gamergate caused the Christchurch mosque shootings. But Gamergate provided the traffic that 8chan needed to take off and grow. And it provided a series of values that meshed well with right-wing radicalization. If you believe women like Sarkeesian are ruining gaming, it’s easy to believe feminism is destroying Western culture. If you believe journalists of color in the gaming industry are being “reverse racists” toward white men, you could easily come to believe that Muslims are destroying white, European culture. Over time, “shitposts” about white nationalism turn into “effort posts” that lead to real-life violence against the most marginalized groups. All it takes is a userbase ready for indoctrination.”

Anita Sarkeesian’s rhetoric did help ruin gaming, resulting in multiple games being banned across Steam and PlayStation 4, oftentimes with the excuse centering around the “exploitation” of fictional characters, such as Super Seducer and Omega Labyrinth Z to name but a few.

And colored journalists are engaging in “reverse racism”, or basically just racism against whites, as exemplified by Sarah Jeong making disparaging, racist remarks against white men while still being hired by the New York Times.

And migrant crimes in European countries like Britain, Sweden, and Germany have skyrocketed in recent years after opening their borders.

The media going out of its way to suppress the news and censor dissent has only raised tensions among religious groups and racial factions.

These truths have been given no platform with which to stand in the den of lies crafted by the media.

A good example of this is the misinformation-laden piece published by Esquire, which runs the gamut of blaming everything from chan culture to freedom of speech to #GamerGate for the New Zealand shooting, writing…

“Increasingly, many observers believe the history of this era will begin with Gamergate, the online revolt from the darker corners of the gaming community that eventually morphed into a vehicle for disaffected young men to lash out at a world that was denying them what they felt was theirs. This is now the world of “incels” and the peculiar brand of white nationalism that fueled the alt-right and, yes, Donald Trump. The shooter used language about invasions and replacement by nonwhite immigrants that echoed the white nationalism that has risen to prominence in America, including at Charlottesville, where marchers chanted, “Jews will not replace us.”

Esquire, The Daily Dot, and other news outlets weren’t the only ones putting the crosshairs back on #GamerGate. Former Congressional hopeful Brianna Wu made a Facebook post on March 15th, 2019 indicating that the FBI had been contacted, and that 8chan was responsible for the shooting, writing…

“I had multiple meetings with the FBI about violence being planned on 8chan, the site where the Christchurch killer seems to have been radicalized. I gave them evidence of these illegal activities and I asked them to act. As reported by the Washington Post, who reviewed my emails sent to the FBI, they chose to ignore it. […]

“I am calling on the FBI to finally investigate 8chan, as it poses a clear and present danger to the American public.”

Given that there is zero evidence showing that #GamerGate was ever an organized harassment campaign, as verified by the WAM!, report and the FBI report, the media has repositioned themselves to employ a revisionist history where #GamerGate was a catalyst for “incel” culture and “white nationalism”, despite the fact that there is even less evidence supporting these claims, especially since there were plenty of non-white males supporting #GamerGate.

Nevertheless, the hysteria created by the New Zealand shooting and the misinformation-laden news spree enacted by calumnious media organizations was all part of the shooter’s plan to sow discord and chaos.

In the 74 page manifesto, on page 5 where it asks “Why did you carry out the attack?”, the shooter clearly writes…

“To agitate the political enemies of my people into action, to cause them to overextend their own hand and experience the eventual and inevitable backlash as a result. […]

“To create an atmosphere of fear and change in which drastic, powerful and revolutionary action can occur. […]

“To add momentum to the pendulum swings of history, further destabilizing and polarizing Western society in order to eventually destroy the current nihilistic, hedonistic, individualistic insanity that has taken control of Western thought. […]

“Finally, to create conflict between the two ideologies within the United States on the ownership of firearms in order to further the social, culture, political and racial divide within the United states. This conflict over the 2nd amendment and the attempted removal of firearms rights will ultimately result in a civil war that will eventually balkanize the US along political, cultural and, most importantly, racial lines.

“This balkanizatio nof the US will not only result in the racial separation of the people within the United States ensuring the future of the White race on the North American continent, but also ensuring the death of the “melting pot” pipe dream.

“Furthermore this balkanization will also reduce the USA’s ability to project power globally, and thereby ensure that never again can such a situation as the US involvement in Kosovo ever occur again (where US/NATO forces fought beside muslims and slaughtered Christian Europeans attempting to remove these Islamic occupiers from Europe).”

Much of what he had intended to accomplish has come to fruition, including the New Zealand Prime Minister looking to change the country’s gun laws.

Essentially the goal was to incite the media to do exactly what they’re doing and continue to increase tensions that will result in reckless legislation or more widespread condemnation and hate that devolves into an eventual race war.

So far, big tech companies and mainstream media outlets are doing exactly what the shooter wanted while accelerating hostilities between groups in Western nations.

(Thanks for the news tip Nick Monroe, Quickshooter and anons)