Compile Heart announced during a livestream event that the sexy JRPG Mary Skelter 2: God’s Prison Tower will be launching on the Nintendo Switch at some point in Japan.

According to Game’s Talk, the game title didn’t receive many details about what would be made available on the Switch or what would be different, other than the fact that it would support touchscreen features when playing in the portable mode, and it will also support interactive HD Rumble features. What’s interesting is that while advertising the HD Rumble feature they teased an image of the game’s notoriously sexy “Purification Mode”, where players must rub and touch all over the female characters in order to “purify” them. 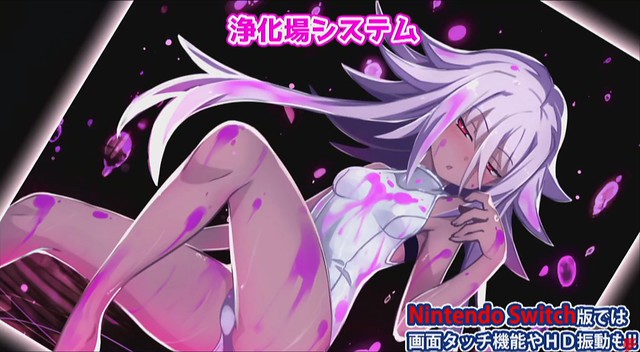 Now what we don’t know is if the Purification Mode will make it into the Switch version completely unscathed and intact.

As some of you may or may not remember, Mary Skelter 2 was one of the games that was negatively impacted by Sony’s PS4 censorship policies. Sony had the team to completely alter the Purification system in the game when it released last year, which broke the Chinese version of the game via a post-launch patch. Chinese gamers had to come up with a workaround in order to play the game again and avoided updating in order to continue to play uninterrupted.

To get an idea of what the gameplay is like, you can check out the trailer for the PS4 version below, courtesy of Blazzer Sora.

The big question is if Compile Heart will release the original Japanese version of Mary Skelter 2 onto the Switch without any censorship, or if they will release the broken and busted up PS4 version that has a gimped Purification Mode that was designed to comply with Sony’s censorship policies? Given that the game will feature touchscreen support and HD Rumble, I’m almost 100% sure that the Purification system will be uncensored.

Right now, though, it’s all a complete toss-up and we’ll have to wait for more info before being able to tell exactly how the game will look and run on the Switch, and whether or not the Purification Mode will make it into the game the way it was meant to be used.

To keep up to date on news for Mary Skelter 2, feel free to visit the official Compile Heart website.