Users are being banned and forum threads are being censored and removed from the community hub for Mortal Kombat 11 over on Steam. After the developers confirmed that they were purposefully de-sexualizing the females and removing the fan-service, and that they would not be adding “scantily clad items” to the game. This has created quite the firestorm on the forums, so much so that the moderators are cracking down extra fast to silence dissent.

It started with locking a thread that was created back on January 29th, 2019 by a female gamer going by the handle of Shiori. She wrote…

“[…] So, let us just say… Mortal Kombat and Dead or Alive both have hot ladies. Both can be sexy, both can have physics, both can have destructible clothing, both can receive hate from SJWs, and both can tell these SJWs to f*** off. Girls aren’t a fan of them either… they keep making us look bad.

“Also, lets all look forward to meeting each other in the Ranks when these great games come out. :-)”

This garnered a lot of negative feedback from censorship apologists and the SJW crowd, who criticized her for liking fan-service in fighting games.

On February 21st, 2019, Steam support moderator, The Empress of Fire, locked the thread.

It began to slowly but steadily escalate from there as more information was revealed that the females in Mortal Kombat 11 were de-sexualized.

A thread that was originally created on December 11th, 2018 by CoolNatureBoy asked…

“They Toned up gore & Violence?,OK but still cant add nudity content like some nudity scenes or nudity type outfit?( like almost was from MK9orWitcher style inspiration elements )? […]

“(And also… sorry for my english)”

Since Shiori’s thread was locked, she came into CoolNatureBoy’s thread to dispel rumors, myths, and lots of criticism from Social Justice Warriors. CoolNatureBoy marked Shiori’s reply as the best reply. On March 26th, 2019 Steam support staff moderator, TinyTim, came in to lock the thread, writing…

“Since the OP has marked an answer to their question and this topic has derailed, it has been locked. Please remember when posting to keep all comments constructive, respectful and relevant to the topic, thanks.”

On February 5th, 2019 D Kruger made a thread titled “Even D’Vorah isn’t sexy anymore!”, linking to the following image.

On February 27th, 2019 the thread was locked, but no reason was given.

Others were duly peeved at the idea that the men have been uncovered and given shirtless and pantsless options but not the women. On February 17th, 2019 user Lupo89 made a post asking…

“Why are all males pretty much left like they where wile all females are being covered up?
What are this double standards?

”The devs are saying they want the game to be more realistic, but then look at these shoes, why would a woman have high heel shoes in this kind of condition? To me all this♥♥♥♥♥♥looks like bs.”

On February 24th, 2019 user Viper made a post mocking NetherRealms for the female character designs, which have all universally been covered up with lots of long draping linens or heavy body armor. Viper wrote…

“Thank you for covering all the women and making the game Shria-compliant!
I am very happy that the good people at Nether Realm agree that women showing skin is an abomination and an affront to god. Together we can undo all the “progress” of the women’s rights movement, and put women in their rightful place once and for all.”

On March 11th, 2019, FrenchToast made a thread about the women faces, asking why does it even matter? He argued that he didn’t really like Sonya’s redesign but that he also wasn’t a long time player and only got involved with playing NetherRealm games after Injustice 2. Of course, the thread turned into criticisms about female sexualization, and whether or not women could be empowered while scantily clad, and on March 14th, 2019 the thread was locked. 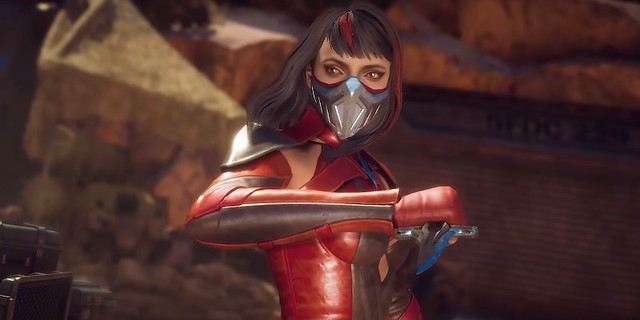 The most recent thread to get the boot was the one made by Lupo89, which garnered seven pages and nearly 100 comments in a matter of hours. Shortly after news spread that NetherRealm Studios purposefully de-sexualized the women and removed the sexy items from the gear customization, users piled in to criticize the decision. Lupo explained…

“To clarify, Beran’s insinuation about the art team targeting clothing and costumes that are more realistic for combat is not true. Keep in mind that all of the male fighters in Mortal Kombat 11 have shirtless or pantsless options, as demonstrated in the press reveals,
None of the women have any of their classic costumes save for Sonya, who sports the workout gear throwback from Mortal Kombat 3. But none of the leotards, swimsuits, or bikinis (as Beran mentioned) have been added to Mortal Kombat 11 and they won’t be added.

“i love how companies can be such♥♥♥♥♥♥♥to consumers nowadays.
But fine, If he is disappointed, I don’t regret not buying his game by any means.”

There’s still one thread open at the time of writing this article from x1337ultra, who posted the thread on March 28th, 2019 titled “i will not buy this social justic crap”.

It’s likely that it won’t stay open for long.

We’ve seen this kind of suppression before. Usually if gamers begin to voice opinions not in alignment with the status quo of the SJW agenda, they get censored, stifled, and suppressed. It’s happening right now with the people speaking out against the politicization of Vampire: The Masquerade – Bloodlines 2, where the forums is a firebrand of sociopolitical contention and censorship.

This kind of censorship also happened leading up to the release of Battlefield V, with the forums and sub-reddit being censored. The counter-consumer antics ended up costing EA millions and landing that game on the Get Woke; Go Broke master list.

It also doesn’t help when clips like the one from Raphael Bleu highlight how Kabal changes his face expression based on whether or not he’s killing other men or women.

Tiny little detail: unless this is just coincidence with the characters in the beta, Kabal’s facial expression changes whether he’s doing this Fatality on a male or female… #MK11 pic.twitter.com/8QQJZkgxEt

As you can see, while killing men he smiles wide, but when killing women he has a glowering, somber expression.

If you’re unable to view the images in the tweet, you can check them out below.

Some people took it that NetherRealm was purposefully making it look like the men enjoyed killing and dispensing violence on other men, but not the women.

Of course that’s simply the observation that some people came to, but we don’t know if that was truly NetherRealm’s intent. But given the fact that they’re employing double standards with the attire for the men and women in Mortal Kombat 11 by covering up the women and dressing down the men, it wouldn’t be surprising if it were true that they intended to give Kabal a more sadistic smile while killing men compared to women.

Either way, you can look for Mortal Kombat 11 to launch April 23rd, 2019 for Xbox One, PS4, PC, and Nintendo Switch, in all it’s hypocritical glory.

(Thanks for the news tip Ran)