Voice actor Joey Camen is the voice of Morrison in Capcom’s latest Devil May Cry 5 outing. Certain forums and media outlets have sniffed out blood in the water after members of ResetEra came across some of Camen’s old YouTube videos where he joked around as different characters. However, ResetEra members deemed the videos “transphobic” and “racist”, and the story escalated from discussing his replacement in the Devil May Cry series, to trying to get enough attention from media outlets to possibly crater Camen’s career.

It started with a forum post on ResetEra by user Skittles on March 18th, 2019, with a thread titled “Capcom hired a white dude who pretends to be black and says nigga to voice Morrison in DMCV. YT channel full of transphobia, racism, and antisemitism”. Skittles wrote…

“Yes, that’s right. The only POC in DMCV is voiced by a white dude who essentially dons blackface, pretends to be black, and say nigga as a “joke”. Voice actor is Joey Camen, and here’s some videos from his youtube channel.”

The videos were promptly deleted after ResetEra escalated the 13 page thread into the laps of Newsweek, who promptly published an article on March 18th, 2019 later that day.

“In another, Camen wears a purple wig and calls himself “Susan”, a “transgender against trans fats.” The four-minute video uses the term “transvestite” and lacks any form of nuance whatsoever. Another video has Camen dressed up as “Rabbi Goldstein” who can’t seem to understand Black Lives Matter but spits when asked if “goyim” (non-jews) matter. One more has Camen as “Tommy from Thailand” where he says “black man try to fuck with me” and “try to jew me down on stuff.” The 27 videos are full of stale humor, offensive jokes and a poor grasp on modern internet culture.”

Newsweek also goes in on Reuben Langdon, the voice actor for Dante in the English version of the Devil May Cry series for the last three games.

They pick out an interview he was in with Yellow Flash, by attempting to frame his views as uncouth. The interview was posted up on the Toy Bounty Hunters YouTube channel on March 14th, 2019. The topic that the media is hovering over starts around the 50 minute mark.

They specifically point to Langdon’s criticism of the #MeToo movements and Black Lives Matter where he mentioned that it’s not about forgetting the horrors that people have experienced, but learning how to forgive.

There’s about six minutes of Langdon explaining his position on the matters, which encapsulates various examples of how people need to learn how to forgive, how they need to learn to say “no”, and how they need to learn how to come together to heal instead of trying to tarnish them publicly or attempt to ruin their careers and their lives. Essentially he notes that #MeToo and Black Lives Matter shouldn’t be used as blunt instruments to hurt people but to help heal people.

[Update:] Langdon also went into more depth about the Black Lives Matter discussion in an hour and a half long interview he had with Mekel Kasanova, who is friends with the actor.

Kasanova mentioned that he was troubled that Newsweek and Eurogamer would ignore the interview he had with Langdon in favor of running with their narrative by cherry picking certain sentences out of context.

However, ResetEra user Kyle Cross cherry picked specific sentences that Newsweek and Eurogamer used in their articles to paint Langdon in a negative light. Cross’ issue with Langdon came from the fact that the hosts in the interview were supporters of anime voice actor Vic Mignogna, and so Cross decided to target Langdon for his “problematic” views, writing…

“Reuben Langdon, who is the voice and mo-cap actor behind Dante in the Devil May Cry series since Devil May Cry 3, was recently interviewed on YouTube and during said interview an extended discussion about the recent events of his fellow voice actor Vic Mignogna having various sexual harassment allegations against him occurs, in which Langdon says some rather problematic things. For starters it needs to be addressed that Langdon has had a lot going on and supposedly hadn’t kept up on the news and when asked did not get a proper neutral description of the events of what’s been going on with Mignogna, as the hosts in this interview are stern “Vic Standers;” People who dismiss the various reports of misconduct against Mignogna by fans and industry professionals and believes him to be innocent and that victims are lying in a grand conspiracy to get Mignogna fired for… reasons?”

For reference, a lot of the people who hate Vic Mignogna have gone out of their way to ruin his career, even going as far as to fabricate a SWATting hoax to blame him and his fans. After some of these false allegations led to Mignogna losing multiple jobs, he decided to file a lawsuit, has made his detractors quite perturbed. Some of these people have gone out of their way to continue to badger Mignogna and his fans, or anyone who isn’t chiefly against him, as evident with Cross taking umbrage with Reuban Langdon not instantly throwing Mignogna under the bus.

Moreover, Eurogamer’s piece was published on March 19th, 2019, framing Langdon and Camen as “worrying developments” and they decided to take these non-stories to Capcom to get the voice actors in trouble, writing…

“When contacted for comment yesterday, a Capcom spokesperson said the company was looking into the situation, but stressed the views expressed by both Camen and Langdon are not shared by Capcom whatsoever.

“These latest worrying developments make for a string of controversies around Devil May Cry 5. In September 2018, Capcom pulled a video showing off new music for the game by the deathcore band Suicide Silence after fans said the band’s lead singer had been accused of having an emotionally manipulative and sexually inappropriate relationship with a 17-year-old fan.”

Langdon didn’t issue a statement to Eurogamer, and rightfully so lest it be taken out of context and purposefully misconstrued, especially since the quote from the two hour long live-stream didn’t properly encapsulate the entirety of Langdon’s message. 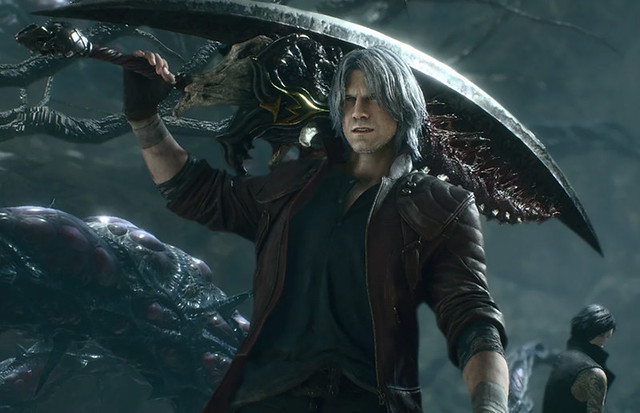 However, Langdon did respond by posting up a Facebook message on March 19th, 2019, explaining his side of the story, writing…

“Wow! I’m mentioned in Newsweek again! It was just over a year ago they were interviewing me for my ET Reseash work, and seemed to take it very seriously. So much so I was mentioned in their special Edition focusing on the idea of contact with extraterrestrials.

“So yesterday I was contacted by someone claiming to be from Newsweek (see email attachment) I replied that I’m willing to talk about other stuff (anything but Vic) and that’s what I meant. I am all for engaging in a dialogue and giving a platform to discuss openly and without bias on where I Stand on certain issues. I’ll talk about #metoo and #blacklivesmatter I’m all for true journalism. To hear all sides of a story. As opposed to hand picking certain sentences from an interview that they didn’t even perform! Then making up a narrative to serve your clear bias about the #qanon 8chan discussions. Why would Newsweek go out of there way to throw me under the bus for having an opinion about a fellow actor? Just goes to show where the news of this world is at the moment and why we must all do our own investigation and research into the issues we truly care about. #Questioneverything #WWG1WGA

“By the way: I got some press when I was shot at in Guatemala a few weeks ago (which was surprising) but not NEWSWEEK!!! In fact there was no mention of that in any of the mainstream media! But having an opinion about someone, especially if you don’t agree with that opinion, watch out cuz thats big news!”

Newsweek didn’t even mention that Langdon survived an attempted armed robbery where he was shot at six times just weeks before the release of Devil May Cry 5.

This kind of hitman journalism has been used in recent times to deplatform ideological opponents, ruin careers, or attempt to get people fired that certain extremists on the Left don’t like, as evident with ResetEra using their clout with Left-wing media to purposefully frame a narrative to damage the careers of Joey Camen and Reuben Langdon.

This isn’t even the first time that ResetEra has pulled a stunt like this. They’ve gone after the creative director of Catherine, Katsura Hashino, in an attempt to get him to censor his work or shame him out of the industry after they made up a false narrative that he was transphobic, and they’ve also doxed and harassed a former employee of GOG.com because he made a tweet with the hashtag #WontBeErased. That’s not to mention that ResetEra was responsible for getting the Subnautica sound designer fired for being a Conservative.

They’re essentially the Left-wing terrorists of the gaming industry.

Whether or not Capcom will take action against the actors remains to be seen, but the agenda-driven journalism by Newsweek and Eurogamer for these non-stories are plain for everyone to see.

(Thanks for the news tip Magi Slayer and Lyle)