Recently it was announced that the “Big Boobs Producer” of the Senran Kagura games at Marvelous Entertainment, Kenichirō Takaki, departed from Marvelous Entertainment. Most people speculated that it had to do with the PS4 censorship policies that Sony enforced on Japanese developers, which severely hampered the development of Senran Kagura: 7EVEN. It turns out that this speculation turned out to be true.

In April Famitsu will have the full interview available with Takaki regarding his departure, his 13 year tenure at Marvelous Entertainment, working at his studio Honey Parade Games, as well as his next project that isn’t Senran Kagura. According to Japanese blog Ryukutya, they’re reporting that Takaki has joined up with Cygames for a new game. The game, however, will not feature any females being disrobed or unclothed.

In a separate post on the Ryukutya blog, they explain that Takaki’s departure from Marvelous was due to the censorship policies and restrictions on sexual content. RPGSite site contributor, BlackKite, posted translations of the snippets from the blog based on the Famitsu interview, which won’t be available in full until April 11th.

It is also revealed that Kenichiro Takaki is working on a brand-new project after his departure from Marvelous to Cygames, although he is still working together with Marvelous as the publisher.https://t.co/R8rV2RjCkT pic.twitter.com/d8ySou7pOA

In the relevant section of the blog, it explains…

“The big reason is the recent censoring of sexual presentations.

“My inside feels like having a string cut off.

“While sexual things may be criticized, there are also many people who do enjoy [those expressions]. I believed that such variation could be one of the [pillars] to support the gaming industry, but it ended up getting crushed easily like this… it became a cue for me to think about various things.

“I’d welcome regulations and restrictions to protect specific genres and scopes. But I feel like the recent course of events made it seem like they’re totally intent to crush it.”

Takaki explains that he’s more intent on making games that he enjoyed during his childhood, specifically console fantasy games, which is why he’s working with Cygames on their upcoming project, which has been in development for the last year and a half. 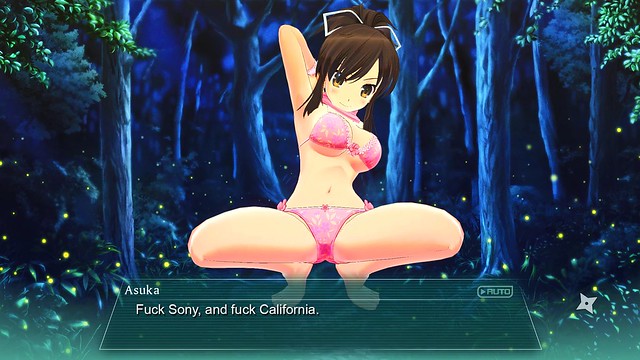 However, as mentioned in the previous article, Takaki will finish up his duties on Senran Kagura 7EVEN for Marvelous Entertainment.

BlackKite translates the relevant portion of the blog, which explains…

“Games currently under production will be finished properly. 7EVEN will take some time. While the base won’t change, but right now we’re making parts that must be evolved.

“After that, either myself or someone else should finish it and deliver it to fans.

“[Senran] Kagura will still be made by cooperating with the same staff members as before, while adjustments will be left to Marvelous, I shall exist as the Big Boobs Producer.”

For further context, while Sony’s regulatory policies have never been made public, they have been rather consistent on enforcing what kind of content is no longer allowed on their systems since around the third quarter of 2018. For instance, they prohibit (mostly) Japanese developers from including interactive sexual segments with characters, or depicting interactions with fictional characters where they don’t consent to the interactions, which is why the Intimacy Mode had to be removed from all future Senran Kagura games on PlayStation consoles.

This is also why some of the other games that had to be regulated on the PS4 had to change the CG artwork to remove instances of groping or sexually suggestive interactions where a character was not consenting to the actions, which is why the developers had to censor multiple CGs for the PS4 version of Nora to Oujo to Noraneko Heart.

This kind of censorship also affected the Hong Kong release of Mary Skelter 2, where one of the core features of the game, the Purification system, had to be completely removed, which broke the entire game. This is because the Purification system involved players groping and touching the characters, sometimes against their will, but in typical anime fashion. This also affected Dead or Alive Xtreme 3: Scarlet on the PS4, where the malfunctioning bikinis that players could pull off against the girls’ will was removed, but it’s still available in the Nintendo Switch version of the game.

For those of you confused about the whole consent concept, it’s a philosophy within Leftist SJW circles where they believe that consent has to be practiced at all times, even with fictional characters. There’s an example of this that dates back before Sony’s censorship policies.

“Two of the main concerns that ratings boards had in regards to Criminal Girls: Invite Only were power imbalance and consent. To avoid this, we decided to change some of the terminology to reframe the situations to be accepted by the ratings boards. Criminal Girls 2: Party Favors follows the same trend for consistency.”

It turns out that this was a lie. The ratings boards did not have an issue with “consent” or “power imbalances”, because even after the localizers censored the game and removed all the situations they perceived as non-consensual, the game was still banned in several regions, and it was still given the same ‘M’ rating from the ESRB  just like the original Criminal Girls, even after all that censorship.

However, the Criminal Girls 2 situation was before Sony’s PS4 censorship policies. That was a case of the localizers trying to change the content of the game to fit their own sociopolitical beliefs, which still didn’t go over well with regulators (nor the fans). However, for the upcoming Criminal Girls X, it’s not just the localizers’ belief about consent that has inhibited developers from including the Punishment mini-games, it’s Sony’s regulations, which is why the developers at Mikage LLC acknowledged that they had to remove the Punishment system from Criminal Girls X to comply with Sony’s censorship policies.

In the case of Kenichirō Takaki, he felt that fan-service was being driven away little-by-little,  thus he had mentioned in various interviews that it was just a matter of time before fan-service goes away. At this point, the censorship regulations have caused him to give up on trying to pursue those kind of games at Marvelous Entertainment.

On the upside he will at least stay on to finish the development of Senran Kagura: 7EVEN, but obviously it’s not going to be quite as feature-rich as past titles given the missing Intimacy Mode. However, Takaki will be working on a new project that will be published by Marvelous Entertainment, which will also have a tie-in anime, according to Gematsu. They’re unsure right now if it’s the same project being worked on by Cygames, but Takaki is already looking beyond Senran Kagura, which will likely never be the same so long as Sony’s censorship policies are in place.

(Thanks for the news tip GSOne)