R’lyeh Game, a Chinese developer, was permanently banned from Steam along with their games Love Shoot and PaPaPub. Valve banned the titles and the publisher on the grounds that they manipulated the review system. We did an article outlining some of the suspicious accounts that could have led to the ban, but there was no definitive proof that R’lyeh Game had anything to do with the suspicious accounts nor any actual proof of manipulation, and Valve has not offered any. Nevertheless, R’lyeh Game responded to the accusations with a blog post, pointing out that they did not manipulate the review system and that based on the current trends of anime and visual novel games being banned, they believe Valve has it out for Asian developers.

On March 7th, 2019, R’lyeh Game made a post on their official website, posting a rebuttal to the accusations of them manipulating the reviews. They explained that it was just “wishful thinking”.

“We have find it hard to accept Steam’s “manipulating a large number of accounts to positively evaluate our products” as the justification for the act of banning us.”

“Perhaps a section of STEAM users pointed out a few suspicious accounts, only bought our games or bought a small number of games but only left us a positive evaluation. However, PaPaPub and LoveShoot also received many comments that only left us a bad review.”

They proceed to list a number of user reviews that highlight accounts with very few games in their profile and only one review on hand that’s a negative review of R’lyeh Game’s products.

They also state that if they had been manipulating the reviews the results wouldn’t have been “mixed” or “negative”, writing…

“Interested Steam users can look at the evaluation of the two products themselves [and check the reviews].

“This does not prove that we are manipulating a large number of accounts to positively evaluate ourselves, at least if we really were “manipulating the evaluation” then the final outcome before the ban would assuredly not be ‘mixed reviews’!”

“Thus, as a result, we have reason to believe that we have become a victim of Steam’s policy change, or possibly a sacrificial victim of ‘Steam’s China process’

“Steam’s so-called amicable treatment of individual developers is a complete and total joke.”

R’lyeh Game proceeded to deliver the receipts of their exchange with various employees at Valve. 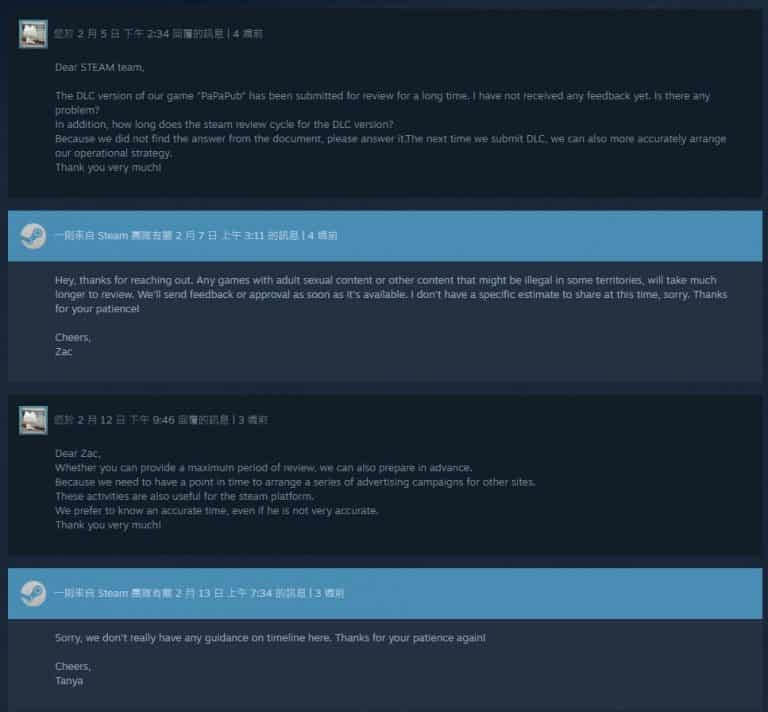 In one exchange that started on February 5th, 2019, R’lyeh Game asked about when Valve would finish reviewing the DLC version of PaPaPub because there was nothing in the documentation about reviewing DLC content. Valve’s Zac responded on February 7th, 2019 by saying…

“Hey, thanks for reaching out. Any games with adult sexual content or other content that might be illegal in some territories, will take much longer to review. We’ll send feedback or approval as soon as it’s available. I don’t have a specific estimate to share at this time, sorry. Thanks for your patience!”

Valve’s Tanya responded on February 13th, 2019 by saying that they had no guidance on a timeline for when the product would be reviewed.

On February 26th, 2019 R’lyeh Game asked again about the evaluation of the content, saying that it had been a month since they submitted the content on January 25th, 2019, and if there was a time frame on when the content would reviewed. Valve’s Zac responded by saying they didn’t have an estimate to share and that they were reviewing the product as quickly as they could. 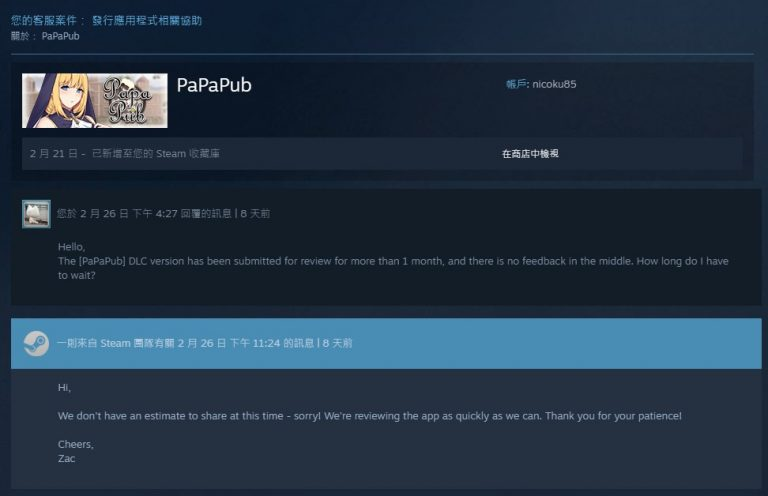 On February 27th, 2019, R’lyeh Game and their titles were banned from Steam.

They argued that they didn’t engage in any kind of review manipulation.

What’s interesting here is that they were asking for more proof of their manipulation of the Steam review system, which was something that other gamers inquired of Jason Ruymen as well, since many gamers felt that the bans for these developers was suspicious. 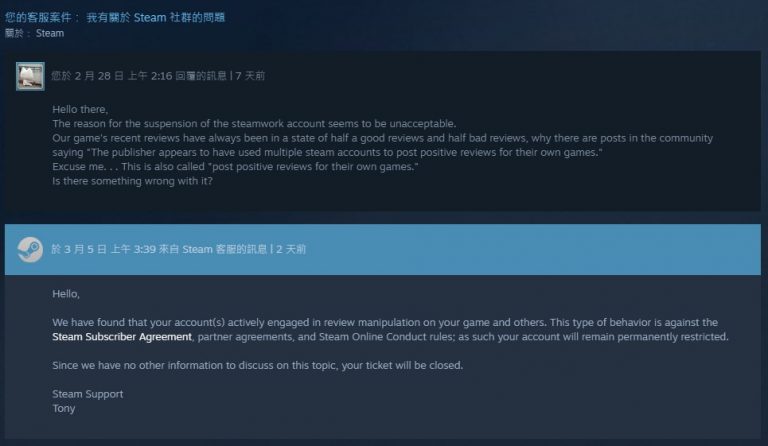 However, Valve’s Tony responded by saying…

“We have found that your account(s) actively engaged in review manipulation on your game and others. This type of behavior is against the Steam Subscriber Agreement, partner agreements, and Steam Online Conduct rules; as such your account will remain permanently restricted.

“Since we have no other information to discuss on this topic, your ticket will be closed.”

R’lyeh Game mentioned in their blog post on the website that they would be willing to hand over IP addresses from their computer equipment and hardware information to prove that they did not engage in any kind of review manipulation.

They went on to say…

It has been a running conspiracy by many gamers and some independent developers, mostly of whom have been Japanese or Chinese, that Valve is specifically targeting certain Asian developers, anime games, and visual novels to ban from Steam. However, some Western developers have also had their products banned as well, including Top Hat Studios’ Cross Love – Episode 1, which compelled them to open up their own storefront.

There are also some rather open and obvious biases, where Valve has banned games like Victory Project, which didn’t contain any sexual content, but allowed games like Sweet Pool and A Hand In The Darkness on the platform, both of which contain underage sex between gay school boys.

R’lyeh Game had some other games that were supposed to come to Steam, writing…

“Up until the ban we had a new game called HappyAlbum that was being audited by Valve, but we haven’t received a reply in more than two weeks. Interlude – The Light’s End Descendent of the Holy Sword was also submitted, but a reply was not supplied within the given time frame on the Steamworks page.

“A concrete reason was never conferred, and we really don’t know anything since Steam won’t discuss or provide any answers when we attempt to appeal. Only Steam’s employees know the real reason.”

As mentioned, they offered their computer equipment and IP logs to Valve, but they state that it seems as if the people at Steam are “disinclined” to care about their issue.

For now, it appears R’lyeh Game and many others will continue to have their products banned from Steam, with nary any info detailing what process Valve came to in order to make such a decision. Keep in mind that these decisions are not inconsequential. They can have a steep financial impact on the developer, causing some products to get delayed, or other products to get cancelled outright, which is what happened to NekoNyan after Hello, Goodbye was banned.

In the case of R’lyeh Game, they’re still trying to figure out what to do next, and apologized for the long post on their website.

For now there doesn’t appear to be anyway to purchase their games Love Shoot or PaPaPub, but maybe they will pursue other alternative outlets such as Nutaku, MangaGamer, JastUSA or DLSite.