The foxgirl romantic visual novel from Artlink and Gumisoft called Tenkiame / 天気雨: Sun Shower, has been indefinitely delayed. The Adults Only rendition of the title was submitted to Valve for review late last year, and the developers had originally planned to release the game on December 21st, 2018, but the release has been indefinitely postponed and no information has been given as to why.

If you check the Steam store page it no longer has any release date at all, but it does explain the general premise of the game as well as the fact that it’s the Adults Only rendition of the title. The description is probably what set off Valve’s red flags, since it involves two foxgirl sisters, a young one and an older one, who end up falling in love and having sexual relations with the main character.

“The content of Tenkiame contains explicit depictions of sexual acts and nudity, as well as language and is intended for adults only.

“They seem to be not human beings, but players will deepen sexual interactions with them along the story.

“With a slow growing love, she can agree and have sex.

“It is very pretty and beautiful.

“All characters appearing in Tenkiame are set to be over 18 years of age. “

Even though Gumisoft says the characters are over 18, we’ve seen in the past that Valve doesn’t care what the canonical ages of the characters are. If they determine that they look under 18, then they will ban the game regardless of what the developers say. 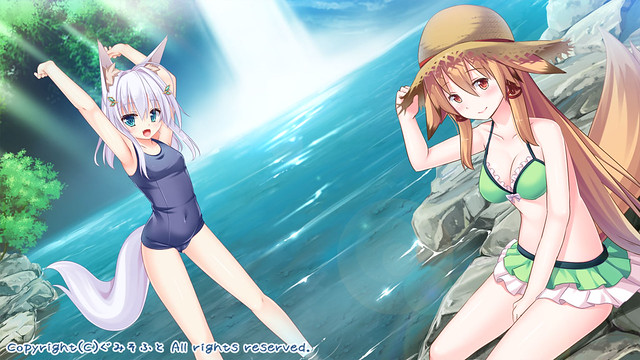 Now since this was the R18+ version of the game, it’s likely that Valve saw the censored sex scenes and determined that the game wasn’t a proper fit for the store.

Alternatively, they could be in communication with the developer and requesting edits. We don’t know and there’s no communication made on the Steam page to indicate what’s really happening behind the scenes. There are people on the Steam forums asking about the delays, but the developers have so far not explained why the game is indefinitely delayed, whether it be a technical issue or a content issue.

We did reach out to the staff at Gumisoft to find out more about Tenkiame’s delayed release, and if they choose to respond we’ll update the article with their response.

In the meantime, you can pick up a digital copy of the R18+ version of the game from IndieGala’s store or from the DLSite store page.

(Thanks for the news tip Mitsuru Kirijou)