Journalists at Left-wing media outlets (which is literally every major entertainment media outlet) have a hard-on for defending Captain Marvel. There has been a war waging on in nerdom over the upcoming film, where anyone critical of it gets put down, shouted down, and censored by the media. What’s more is that anyone who doesn’t toe the SocJus line finds themselves being put in the cross-hairs of idle journalists looking for ways to virtue signal while safeguarding the integrity of a fictional character. That’s what happened to various YouTubers who got singled out by NBC News’ Ben Collins and Vox’s Matthew Yglesias.

The two journalists singled out YouTubers like John Talks, BanditIncorporated, Alteori, and Xaenca, calling them “incels” and mockingly saying that “Liberal norms” for open dialogue were being threatened.

Yglesias started things off on March 4th, 2019, condemning those who didn’t want to step into the hug box of “Liberal Progressivism”.

It’s of course not a threat to free speech in the legal or constitutional sense, but anti-PC fervor turns out to be a significant threat to liberal norms of open discourse and dialogue. pic.twitter.com/03xE6lhOWy

It’s “cancel culture”! It’s political correctness out of control! The kids these days!

Yglesias had a cavalcade of like-minded Liberals and Social Justice Warriors filling up his Twitter feed with reverberated support like an airport trash can spilling over with fully-packed barf bags.

His arguments look pretty weak when you see videos like the one from The Critical Drinker that completely dismantles and destroys everything people like Yglesias and his cronies straw man across social media, but it’s not like Social Justice Warriors know what it means to be honest.

Yglesias’ irreverent mockeries of people critical of Captain Marvel was exacerbated by Ben Collins like a murderer adding cannibalism to his resumé of monstrous behavior.

Collins’ tweet went up on March 4th, 2019, stating that the aforementioned YouTubers were part of an “incel hellhole”. 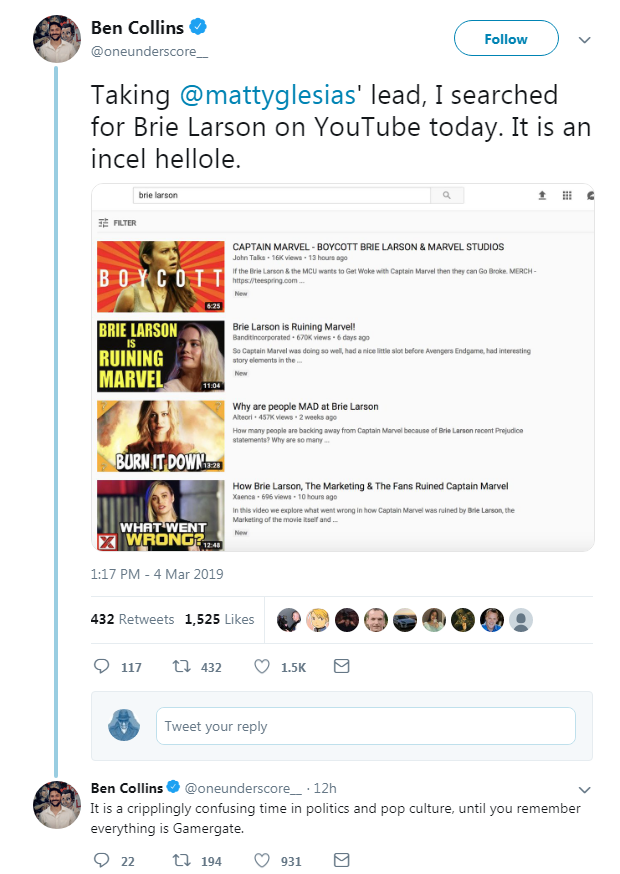 And yes, Collins decided to dig up the grave of #GamerGate and allow his Twitter account to make love to the old hashtag with an unnecessary tweet, almost like a lonely undertaker making unnecessary love to freshly buried bodies when no one is around.

Unsurprisingly, writers like Matt Collette from the Huffington Post chimed in to support the anti-male narrative that Collins had no qualms of slipping into like Tim Curry slipped into lingerie in The Rocky Horror Picture Show.

Other blue checkmarks continued the straw man narrative that basically any YouTuber talking negatively about Captain Marvel is not only an “incel” but also an “Alt-Righter”, because obviously no one who is married or exercises an ounce of common sense could find the upcoming film insufferable.

Can someone explain to me (and @MollyJongFast) why the incel / alt-right has determined that ALITA is their alternative to CAPTAIN MARVEL?

Is it really as simple as “they’re mad at Brie Larson, and ALITA is a sci-fi / action movie with a female protagonist, so sure why not?”

There’s also the obligatory Social Justice buzzwords tossed around, as if “Alt-Right”, “Incel”, and “GamerGate” weren’t enough. Some of them decided to claim that YouTube suggestion feeds would be “gross” for a while.

YouTube’s suggested video algorithm is so fucked up. I remember a few years ago I watched a couple of clips of Bill Burr’s stand up, and somehow that made YouTube think I was into the Red Pill shit. It took more than a year of not interested and ignoring channels to make it stop.

I mean, there’s nothing worse than having “gross” suggestions in a YouTube feed consisting of opinions and viewpoints that don’t align with the totalitarian Liberal agenda, am I right?

Anyway, the mockery of YouTubers who don’t have to learn how to code because they make more money than the thousand or so journalists put out of work, isn’t going to bring back the jobs of journalists, nor will it make normal people less ambivalent, averse, or indifferent about Captain Marvel.

But maybe if by constantly game-dropping #GamerGate and calling popular YouTubers “incels” they’ll win over the favor of their bosses enough to stave off being let go for a short while longer?

Captain Marvel is due out in theaters this weekend. Given that almost every major theater the world around only seems to be playing the movie, you shouldn’t have a problem catching it at the local cinema, assuming you’ve been dying to self-induce cancer into your viewing diet.