3DClouds.it and Soedesco’s Xenon Racer hasn’t been given a whole lot of spotlight under the promotional marketing banner due to it being a low-budget title, but it’s definitely a game worth keeping an eye-on as it offers up a different kind of futuristic racing experience.

Instead of being another F-Zero clone, or a VR-gimmick racer, Xenon Racer attempts to take the prestige and seriousness of the touring car concept, yet combine it with futuristic vehicles that run on electricity and Xenon gas, which enables them to reach crazy high speeds.

The publisher recently let loose a brand new gameplay trailer, giving gamers a brief look at a few of the international tracks that you’ll be racing across.

We first get a glimpse of a track in Boston, Massachusetts, as well as a short whip around a Lake Louise in Canada.

These two particular tracks are highlighted with widely different environments, as Boston sees players whipping around the turns and blasting through the straightaways with a bustling metropolitan hovering in the background with concrete structures and commercial domes filling out the scenery.

The Boston track is rather distinctly different from the Canadian track, given that players will start within a small city space but wind and twist their way through a dense forest while the sun sets in the background. A lake looms off the hooking corners that loop and weave between the tall pine trees. 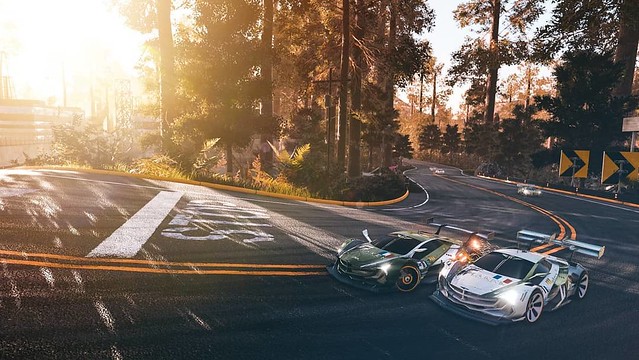 The trailer comes just a week after 3DClouds.it held an open beta test for the game over on the Steam store to give PC users a brief taste of what the gameplay, handling, and tracks were like. Unfortunately there isn’t a lot of feedback on what people thought of the beta but there are a few posts that highlight what the game does right and what it needs to improve. Overall, the perception of the game is that it has a lot of potential and could be a nice little arcade racer to pass the time.

The full game will feature customizable vehicles, tracks spanning a plethora of international locations, and best of all, split-screen support.

You can look for Xenon Racer to make its way to the Nintendo Switch, PS4, Xbox One, and on Steam for PC starting March 26th.