[Original article:] If you’re a content creator who happens to have a penchant for covering FGC-related content for this year’s biggest fighting game releases, you’re going to have a rough time trying to monetize that content, especially if it has anything to do with Dead or Alive 6 or Mortal Kombat 11.

Being a @MortalKombat or DOA6 content creator in 2019’s gonna be rough on some of the smaller channels. Hope this automated system gets more lienient than harsh in the future. @YouTubeGaming pic.twitter.com/z4kPzcVdbp

What’s funny is that this is despite fact that Mortal Kombat 11 has done everything in their power to de-sexualize the females, but it wasn’t enough to keep the content Commissars away from demonetizing the game for its gratuitous violence.

If you can’t see the image or need a larger display of the screenshot, you can check it out below. 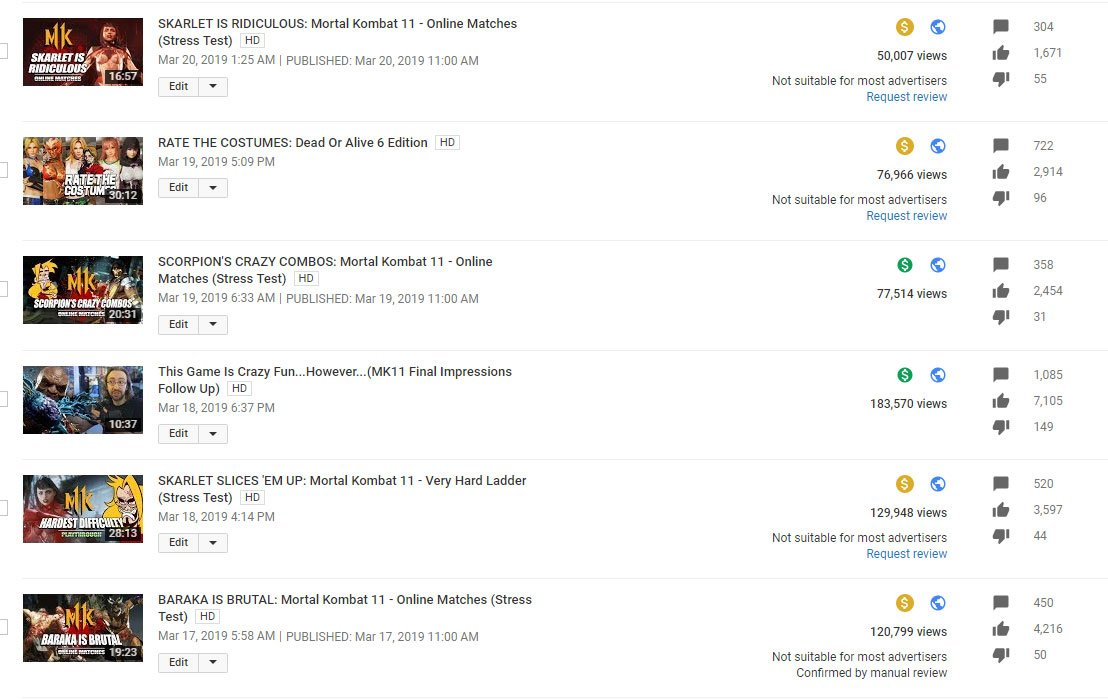 Basically all things Dead or Alive 6 or Mortal Kombat 11 have been demonetized by YouTube… for Maximilian.

This doesn’t mean everyone is getting hit, but if a fairly large FGC YouTuber is feeling the pinch, most other smaller channels will likely feel the squeeze even tighter.

This isn’t even new, nor the first time that Mortal Kombat was caught in the cross-hairs of YouTube’s demonetization antics.

Last year in April of 2018 Twin Galaxies reported that YouTube was targeting violent video games like Mortal Kombat and demonetizing them.

Once again Maximilian noted that his Mortal Kombat X content was basically all getting demonetized, to which Angry Joe Vargas said he would attempt to bring it up during a meeting with YouTube.

The hell?! For real? Can you DM me some screens, I have a meeting with YouTube soon and I’ll definitely bring this crap up to see what’s going on!

One of several pages pic.twitter.com/SRVeO06DeJ

This had been an ongoing issue for a lot of smaller YouTubers since before 2018. In fact, they had reported back in 2017 that their Mortal Kombat X videos were consistently getting demonetized.

Hey @YouTube Thanks for un monetizing this video, re monetizing it, then manually making it ad unfriendly so I can’t contest this. pic.twitter.com/ahe3VTprFr

This was around the time of the Adpocalypse back in 2017, when YouTube was making demonetization blacklists, and even Teen-rated games like Destiny were getting demonetized, while many other anti-SJW and other non-conformist channels had also reported that they, too, were being demonetized.

Other games like Senran Kagura have also been getting flagged as well, with the most recent game, Senran Kagura Burst Re:Newal, getting widely demonetized across many smaller channels.

Hi Max! I’m a smaller channel with only 1,700+ subs and I get this issue all the time. I make videos mostly one Senran Kagura, an action game with fan service, and while they didn’t get demonetized too much before, now pretty much all of them get hit. Just thought I’d share that. pic.twitter.com/e3z4uLatDa

Basically this is YouTube’s way of creating a chilling effect to steer content creators away from making certain kinds of edgy content for money.

However, if the demonetization keeps up for games like Dead or Alive 6 or Mortal Kombat 11 (which is very much attuned into highlighting the male body in various states of undress) then major content creators are going to steer clear of these games and avoid making content for them if they aren’t going to be making any money off of them. This could end up hurting their long-term appeal unless niche channels that just like to make content for the heck of it continue to produce videos for the aforementioned games.