Anyone looking up Brie Larson on YouTube may have found that the results might be a little… duplicitous. Why? Well, according to various sources YouTube has reportedly been modifying and manipulating the search results in order to suppress the negative videos critiquing or criticizing the actress for controversial comments she made about white males leading up to the release of Captain Marvel.

It started with a series of tweets from a Twitter verified user and writer Julia Alexander, who posted up comparison images of before and after shots of YouTube search results for the search term “Brie Larson”.

Alexander made the series of tweets on March 7th, 2019.

This is kind of a fascinating discovery: YouTube seems to have changed the immediate “Brie Larson” search results to News. That pushes up authoritative sources and, in turn, pushes troll or MRA-style video rants pretty far down the page. Here’s what it was versus now. pic.twitter.com/ifw9JjXQie

Here’s another example: If I search “Anita Sarkeesian” the main results are all pretty apparent troll posts from bad actors. The main difference? No “news” tag. Therefore, authoritative sources aren’t pushed to the top and conspiracy videos that receive engagement are. pic.twitter.com/QbEve62SAZ

My final takeaway from this is proves YouTube fundamentally understands how its site works and how certain creators game its algorithm because it’s intervened and fixed it. The big step now is actively implementing that fix we see with News to the entire platform.

The news spread around the web but not many websites seem to have picked up on it. NBC News published an article on March 7th, 2019 acknowledging the manipulation of the search results by YouTube, but the news outlet later deleted the article, including the web cache. An archive only shows a 404 page. However, the article didn’t completely clear out of Google’s search results.

“For ‘Captain Surprise,’ YouTube appeared to change its search results for “Brie Larson,” which moved probably the most assaults on her decrease in choose of mainstream media retailers. The corporate in the past introduced that it was once running to spice up “authoritative” information resources.

“Walt Disney Studios didn’t reply to a request for remark.”

If you check the search results now, it appears as if it’s slightly balancing out. For instance, you’ll see that Banditincorporated’s video – with more than 1 million views – is at the top of the search results, alongside a Jimmy Kimmel Live video. 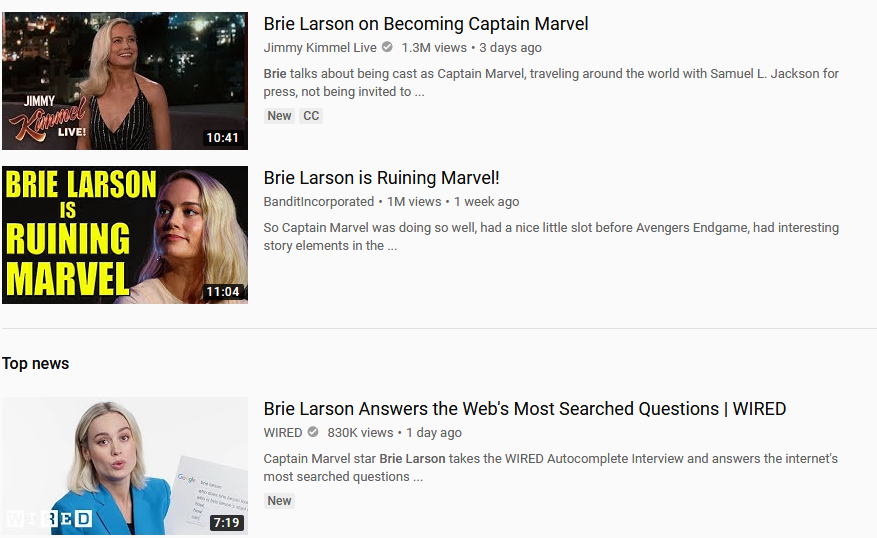 The results aren’t consistent, though. If you use an incognito window, the results are almost universally sanitized, with the results mirroring the cleaned up, manipulated results that appeared in Alexander’s image, with only corporate news sources appearing at the top. 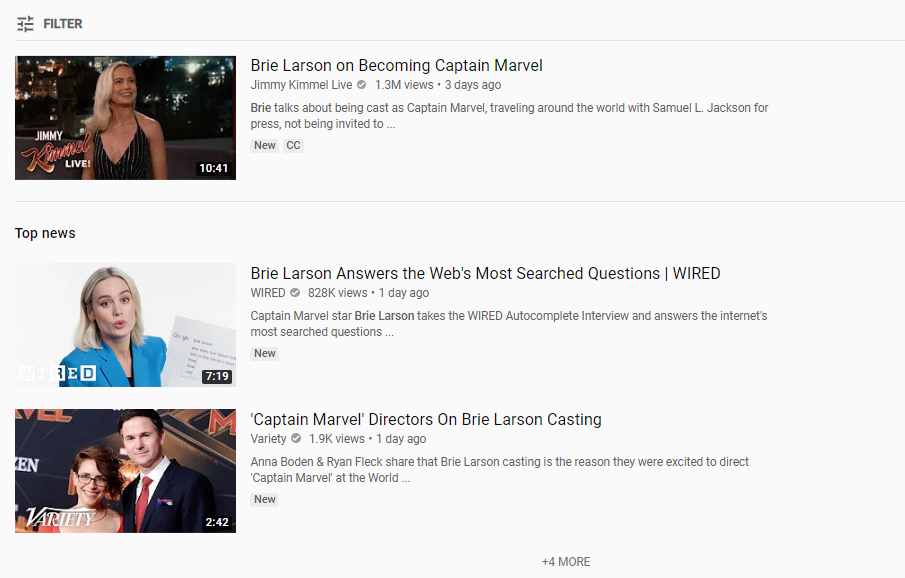 The thing is, since there’s no way to view a cache of the results before the manipulation, it’s not readily possible to compare the results under different conditions. The Wayback Machine also lacks a proper archive of the search results, with the only entry in the database being from April, 2017.

The instance isn’t being discussed much by many other outlets or YouTubers. However, Mundane Matt did a nine minute video about the occurrence on the 3 Buck Theater channel.

It’s hard to tell exactly what’s happening with the results and if it’s true that YouTube is purposefully suppressing negative videos against Larson. However, seeing Banditincorporated’s video near the top in all of its cynical glory, along with videos from other critical YouTubers such as the one from Alteori titled “Why are people MAD at Brie Larson”, Comic Book Girl 19’s “What is UP w the Brie Larson Captain Marvel Controversy?”, and WorldClassBullshitters’ “How Brie Larson Cost Marvel One Hundred Million Dollars” seems to poke holes in the theory that the results are being tampered with aggressively or consistently.

The results definitely seem to favor the corporate news sources first and foremost. But running the search a handful of times either in incognito mode or logged in seems to give relatively similar results with both positive and negative videos appearing near the top.

As NBC News originally reported before deleting the article, we don’t have any confirmation from Disney or YouTube confirming or denying that search result manipulation is taking place. We do know for a fact that Google has purposefully altered certain YouTube searches in the past, as reported by outlets like PC Mag and Breitbart.

At this point it doesn’t really matter if the search results are being manipulated because plenty of people – even with Rotten Tomatoes having censored the pre-release comments and ratings – have still made it known that they don’t want to see Captain Marvel. For those who did give in and plant some coin in Marvel’s coffers, they didn’t seem terribly pleased with the film and have given it a rather unflattering 34% user rating over on Rotten Tomatoes.

(Thanks for the news tip Julio Sotomayor and Ebicentre)