Electronic Arts paid big money to some of the top influencers across Twitch and YouTube to get Apex Legends to trend on social media and garner 50 million registered users for the free-to-play Battle Royale game, as reported by Unikrn. However, paying for influence doesn’t mean that gamers are going to keep playing your game, and according to a new report it appears that the engagement and mindshare for Apex Legends is waning real fast, as the game is on a steep decline as far as interest is concerned.

Seeking Alpha did a rather thorough job monitoring the mindshare and estimated market valuation between Fortnite and Apex Legends, and as the saying goes: the numbers don’t lie.

We see that the trends on Google have dropped drastically. 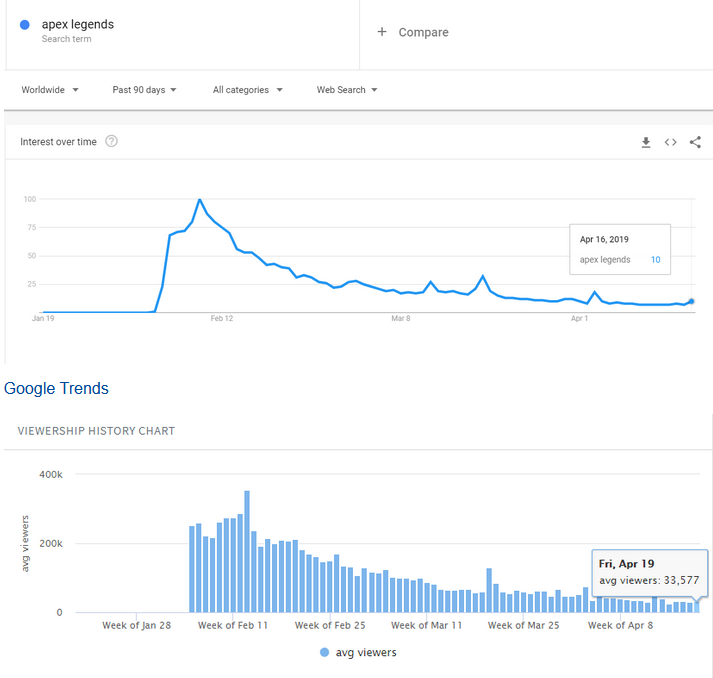 They’ve lost about 90% of the market interest since going live on February 4th, 2019.

If you think that maybe the wane from Google searches and trends is just an anomaly and that the game is still doing well on Twitch, think again.

The Twitch figures show that Fortnite stayed steady during the launch of Apex Legends, but as time wore on, the latter began to wane greatly while Fortnite held strong. 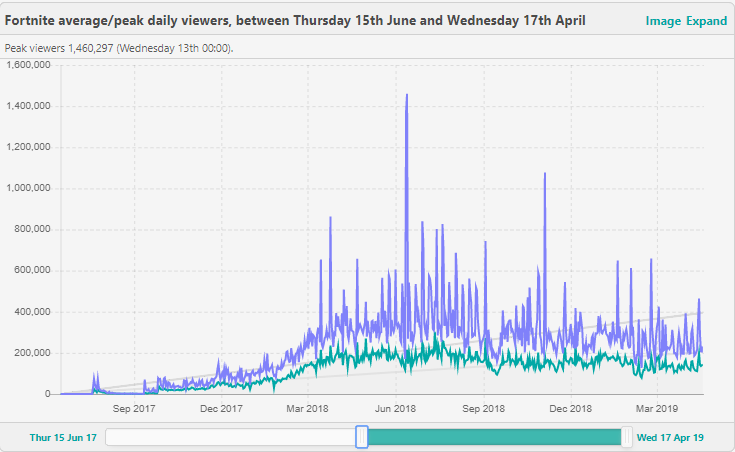 According to Seeking Alpha, Apex Legends only manages 20% of Fortnite’s Twitch total viewers and barely maintains 4% of the search volume of Fortnite.

Apparently with the game getting woke early on, it didn’t help increase interest nor did it do anything for the game’s marketing to help keep people playing the game. Instead, it just seems to have helped push people away, especially if the figures are anything to go by.

As pointed out by Seeking Alpha, the numbers continue to drop as YouTubers and Twitch streamers begin to abandon the game. Ninja stopped playing the game; Shroud gave up on the game, along with Dr. Disrespect, and other content creators and influencers. This is largely why the game is no longer as popular on Twitch, and why the numbers keep dropping.

The most critical takeaway from the article is mentioned near the top, where they state…

“Although Apex did have a strong launch, this traffic was mainly acquired and not organic. EA spent millions to pay streamers to stream Apex gameplay on launch day and a few days afterwards. When the streamers quit or stopped streaming Apex, interest in Apex dropped sharply.”

One of the other things they bring out is that certain media outlets and market analysts are raising the market valuation of Apex Legends and EA for the Battle Royale game in ways that don’t reflect the reality of its actual playerbase. It won’t be long before EA either has to repackage the game or shut it down.

(Thanks for the news tip Digital Tragedy)