It’s no shock that certain topics related to Mortal Kombat 11 get censored and deleted on the Steam forums. We reported back in late March that threads criticizing the female characters being de-sexualized in Mortal Kombat 11 were being censored. Well, someone else recently shared a screenshot of being warned by moderators that their topic was “inappropriate” when they asked for the return of sexy female costumes in Mortal Kombat 11. Yes, asking for sexy outfits in an ‘M’-rated game where the Steam forums are hidden behind a mature content checkbox was deemed “inappropriate” by the moderators.

The image of the moderation warning was shared on Kotaku In Action, where it garnered a lot of feedback. 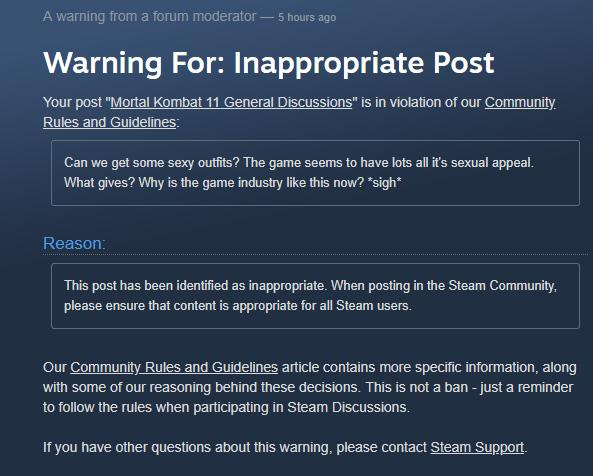 The user, luzarius, explained that they didn’t actually buy the game but saw all the news about the game and posted the message on the forums asking for sexy female costumes to return, which is something that some gamers have even started a petition over.

This isn’t an isolated incidence, though.

Steam moderators are still locking threads criticizing Mortal Kombat 11‘s de-sexualized females, as well as threads asking for sexy outfits. This included a thread from Below Zero asking “What has gaming come to?”, which got locked. There was also Zeriel00’s thread asking “Why do the women look like NBA players in Burkas?” that also got hit. 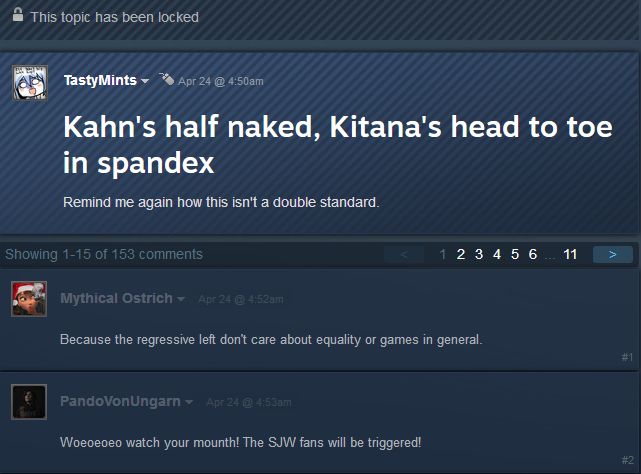 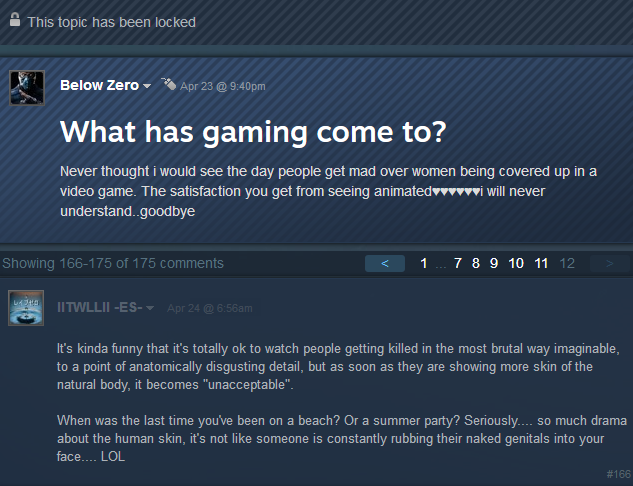 TastyMints’ thread was locked, which stated “Kahn’s half naked, Kitana’s head to toe in spandex”, along with with Alucard_LV0’s thread, which is in the form of a question asking “SJW MK??”.

Steam user Ben had a great thread with an intelligent argument to boot, but it was also locked. He had a rather lengthy missive to NetherRealm Studios criticizing them for double standards and sex-negative view on female sexuality titled “Attactive characters are NOT a bad thing. Stop pandering to social justice.” Near the end of his very well argued and detailed post, Ben wrote…

“[…] If you’re gonna talk♥♥♥♥♥♥about female skimpy outfits whilst not changing a damn thing about the male ones, that makes you a hypocrite by definition.

“I dare you to poll your players and ask them if they are okay with attractive characters or not. I am confident the majority of MK players dont mind.

Despite Ben getting a lot of positive feedback for his well thought out arguments and detailed post, which was filled with examples, the moderators locked the thread just two hours after Ben posted it.

The same thing happened to SuperFluffyShmoopy’s thread, which was also locked after he broke down why the female outfits weren’t realistic. 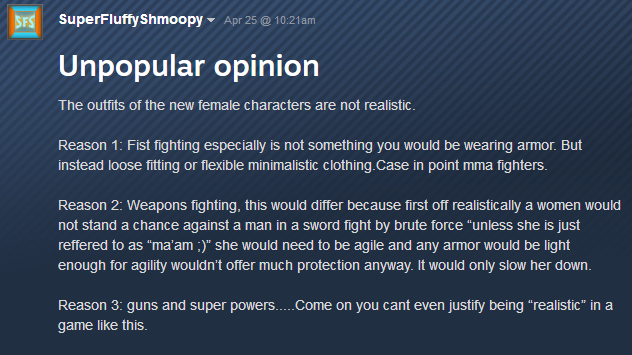 Another thread from Litwalker exclaiming that Mortal Kombat 9 outfits might make a return was also locked, but it’s unclear exactly why.

Now to be fair, not every thread championing the SJW agenda in Mortal Kombat 11 escapes unscathed, and not every thread asking for “compromise” has been locked. For instance, a thread from akiraxtreme1 was locked by a moderator after he explained why – as a black man – he enjoyed Jax’s “woke” ending, which resulted in actual black gamers coming out to trash his opinion because they felt that it took one of the few unique black characters in gaming and turned him into Left-wing agitprop.

MeddlingKid, a Valve moderator, was quick to hop in and shut the thread down, writing…

“This thread’s gone off the rails. I’m locking it down.”

Other threads, like the one from Vee – yes, the same Vee from YouTube – was left alone, as of the writing of this article. The thread simply asks “Could we please have a compromise?” 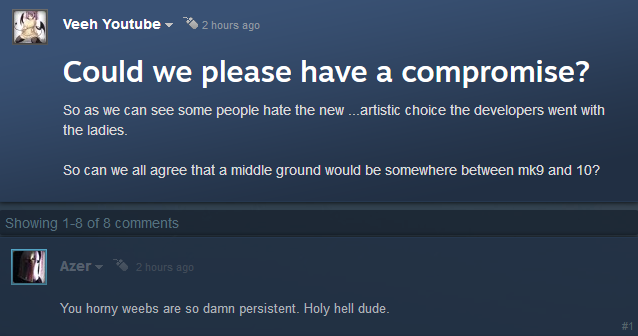 Furthermore, you’ll notice that Vee’s thread doesn’t contain any mention of the words “sexy” or “sex appeal”, which could be why it has escaped moderation… for now.

However, it’s only nine hours young as of the writing of this article, and it’s possible that it could end up getting nuked once the moderators catch wind of it.

Also, surprisingly, a thread made by GamingGod on April 23rd, 2019 is still open and alive even though he was absolutely convinced that the mods were going to lock the thread. He laments the censorship that has been locking and banning users while also asking where the sex appeal is in Mortal Kombat 11.

Tonkinese’s thread is also still alive, possibly because it was buried, but he let’s loose on a tirade against NetherRealm Studios for becoming the prudes they fought against in the 1990s, ripping into them for the hyper sexualized males, and for de-sexualizing the females.

It looks like the moderators might be slightly overwhelmed with all of the high-traffic negativity aimed at the game during the launch week, and just didn’t have time to nuke all the threads. Most of the ones critical of the females or asking for more sexualized outfits were shut down within hours of being made, so it’s possible the mods only target the threads they see as opposed to scouring through the entire forum board to find infractions.

What’s more is that some users have also been reporting that mentioning “PC” in the Mortal Kombat Twitch chat can sometimes result in the words being blocked.

Talk about how netherealms is banning the word PC because of how bad the PC port of MK11 is. pic.twitter.com/HxpqaaMOf0

Just did it again it’s still up 🤦🏾‍♂️ pic.twitter.com/2KRC7kgb8F

Now I did attempt to test this myself and entering “PC” did not result in the message being blocked. It’s possible that this was an active moderation measure during the initial launch of the game but they scaled back afterwards.

In any case, I can’t imagine the long term sales being all that strong for Mortal Kombat 11 if the censorship keeps up and the developers continue to antagonize fans for not accepting their SJW agenda in the game.

(Thanks for the news tip Ebicentre and War on Fanservice)