MangaGamer and Waffle’s Funbag Fantasy: Sideboob Story recently released on Steam uncensored. I know we report on a ton of games frequently getting banned on Steam in recent times, usually for unclear or inconsistent reasons due to Valve’s opaque review process, but sometimes some games do release uncensored on the platform in the manner befitting the whole Adults Only filter.

The NSFW Lewdgamer picked up the news after it was announced over on Steam that the game is currently available right now as a standalone sequel to the original Funbag Fantasy, which MangaGamer launched back at the beginning of February.

The second entry in the story picks up after the events of the last game, where General Gladys and Prime Minister Emeralia take the center stage themed around their bountiful exploits involving their rather… excessively endowed assets. 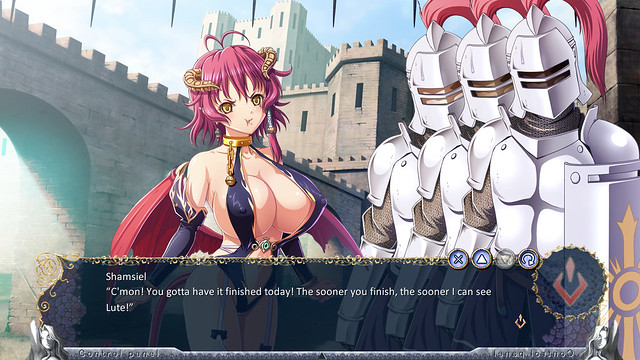 The game is all about boob culture.

Gamers will chase after and engage in some hardcore fun bag fun times involving lots of… salubrious secretions of entertainment that would make any man (and lesbian-loving ladies) come away with a sticky sensation of unequivocal enjoyment.

According to the Steam page, Funbag Fantasy: Sideboob Story sports over 200 different CGs to unlock, more than 20 hours of story to explore, along with a story written by Kagami Hiroyuki and character art designed by Q-Gaku.

I know that Valve has been on a ban streak lately, taking down all sorts of adult-oriented titles in recent months even though they said they wouldn’t be the taste police, but every so often they still allow some Adults Only games on the platform, such as Funbag Fantasy: Sideboob Story.

Alternatively you can buy the game directly from the MangaGamer store page, completely uncensored and entirely not safe for work.