The Funimation DVD and Blu-ray release of Dragon Ball Super: Broly has arrived, but not every feature is intact. According to some of the people who purchased a copy of the movie, they noticed that one of the advertised features on the store page was not available in the actual Blu-ray release.

It started with users spreading the word on Twitter that the DVD and Blu-ray release of Dragon Ball Super: Broly no longer contains the Vic Mignogna interview, as promised on the retailer pages for the DVD and Blu-ray sets. This is despite the fact that Mignogna voices the titular character, Broly.

If you follow the links to the Amazon page and scroll down, sure enough you’ll see that it lists interviews with the English casts as well as a special segment with the voice actors where they answer questions, which includes Vic Mignogna. 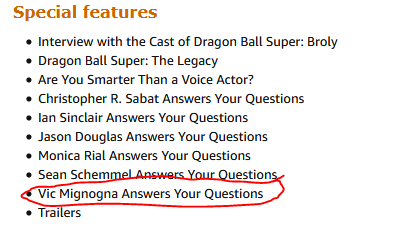 These same features were advertised on the Crunchyroll store, as well as DVCorp, just to name a couple of others. 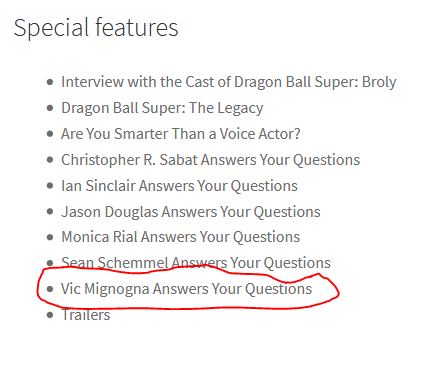 This was corroborated by YouTuber YellowFlash, who did a 10 minute video breaking down what was advertised on the retailer pages and what was not available on the Blu-ray or DVD discs. You can check it out below.

YellowFlash purchased a physical copy of Dragon Ball Super: Broly from the store, and posted up a picture from the “Extras” menu where the interviews were supposed to be located with the staff. 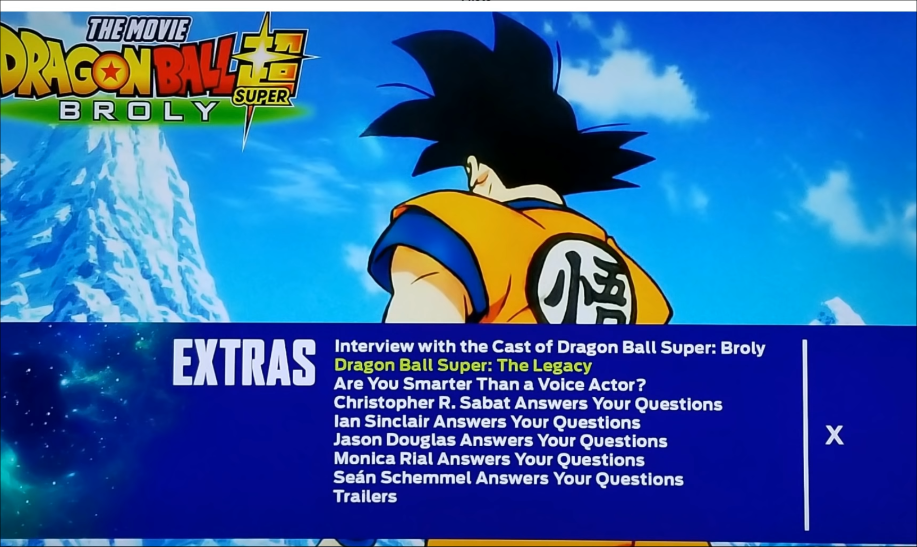 Now YellowFlash did note that Mignogna still appears in the cast and credits section, so Funimation didn’t remove him completely his credits or presence from the Blu-ray and DVD release.

Nevertheless, some of the people who purchased the physical discs were not at all pleased with the missing features, especially since it was clearly advertised on places like Amazon and Crunchyroll.

Over on the Funimation forums there were people calling it false advertising.

Funimation, however, is still intent on hiding aspects of Mignogna’s content from consumers, as part of their separation from the actor from earlier this year when they cut ties with him following the allegations that surfaced regarding misconduct.

The allegations, however, have not turned out to be veritable, and various accounts have been revealed to be false or fabricated. In turn, Mignogna retained a lawyer in preparation for a lawsuit, but it doesn’t look like Funimation wants to heal the rift they created with the voice actor.

This latest stint could put Funimation in hot water if it turns out that they purposefully pulled the Vic Mignogna interviews at the last minute while actively promoting that the interviews would be available in the Blu-ray and DVD releases.

We’ll see if Funimation attempts to course correct or if they’ll pull a Crunchyroll and desperately try to hide any traces of false advertising.