[Update: 4/19/2019] Kotaku UK editor Rich Stanton issued an update on April 19th, 2019 via an article titled “We Screwed Up With That Persona Lyric”. Stanton attempts to justify the original article, but notes that some backend issues prevented them from originally updating it correctly, and that Atlus confirmed that the vocalist does not say “retarded” in the song.

[Original article:] A bunch of Kotaku’s readers turned against them recently after a hit-piece was published on Kotaku UK, which centered around the lyrics in a song that appeared in the Persona 5 DLC for Super Smash Bros. Ultimate on the Nintendo Switch.

“Part of the DLC pack’s addition includes a number of Persona music tracks, which can be listened to in full outside of battle. However, one of these tracks caught our attention for all the wrong reasons.

“In the track ‘Wake Up, Get Up, Get Out There’, if you skip to around 1:48 into the track, you’ll reach a section of the song where words are softly spoken rather than sung. At around 1:57 it appears the term “retarded” is used, and followed up by the assertion that “I can say it.” The official lyrics for the song, curiously enough, does not include this spoken word section”

YouTuber Brad Glasgow from Game Objective did a video breaking down the exact lyrics from the song at around the 50 second mark, so you can listen to the lyrics for yourself and determine whether or not the vocalist says what’s being stated in the Kotaku article.

The real story, however, is that Kotaku’s own audience turned against them in the comment section. Not only that, but Asian commenters took them to task for their remarks, calling for an apology and for the author to be fired.

The comment section was livid with people calling Kotaku “racist” for the perceived slights against the enunciation used by the singer in the Persona 5 DLC for Super Smash Bros. Ultimate. 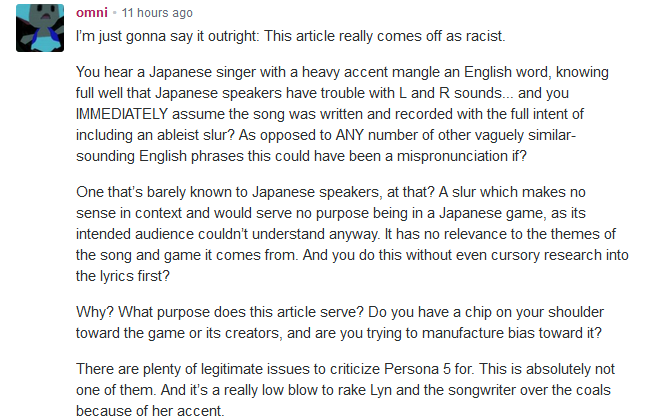 500 comments and counting. Many of which are calling out Kotaku UK’s coverage of the matter.

Part of the reason there’s such a vitriolic reaction to the article is because people fear that Nintendo might censor the DLC. It happened before when ResetEra pitched a hissy fit about an animation in Super Smash Bros. Ultimate, calling the frame “racist”, and so Nintendo changed the animation.

As Brad Glasgow pointed out in the video, it would have been better to have contacted Nintendo et al first and then run the article if they give a response, especially if the intent is to damage the brand.

But this is par the course for Kotaku. Remember Nathan Grayson started the whole Ellie controversy in the Overwatch League, which led to a huge media fallout, and was followed by Soldier 76 being forced to become gay.

But journalist Sophia Narwitz also chronicled some of Dale’s other exploits, as outlined in a tweet made on April 18th, 2019.

A ‘journalist’ who once lied and retracted a story about experiencing transphobia on stage, & who also claims to have almost been kidnapped at E3, & one who constantly uses her identity labels to bat away criticism may have jumped the gun on this story? Im shocked I tell ya! pic.twitter.com/gqaWoCtVUG

To make matters worse for Kotaku, the topic managed to trend on social media briefly, as people ragged on Kotaku for coming down on Asian’s and their pronunciation of certain English words.

Imagine if a major gaming site published something similar in 2019 before doing any checking at all! Embarrassing!

Guys, if the past few years haven’t taught us anything, let us learn something now after the Kotaku article: Don’t read gaming articles anymore! There’s like 100 other gaming you tubers and whatnot to update us and give honest info#kotaku

Gaming Journalists: Games are too hard and that’s ableist!
I’m payed to play games and review them but I just cheesed the final boss because hard.
We think there’s a disability slur in a song that’s been out for nearly three years.
TAKE US SERIOUSLY! #kotaku

A couple of people did attempt to come to Kotaku’s aid, but they received very little support from the community.

If Laura Kate Dale and #Kotaku end up pulling that article completely I’m going to be disappointed. It’s not a well researched expose but it never presented itself as one. It’s a meandering, speculative opinion piece, nothing more and nothing less. The harassment is ridiculous.

The response to this specific article was definitely far more antagonistic than a simple speculative opinion piece with a clickbait title warranted in my opinion though even from people who weren’t obvious gaters.

I don’t know what’s worse between the Kotaku article or Thompson’s lack of self-awareness.

The fact that he can’t see why people would be angry about gaming outlets that are more concerned with Social Justice Warrior activism than informing gamers about games is beyond me.

Anyway, this is just another in a long line of issues that gamers have had with today’s media journalism outlets, and part of the main reason why #GamerGate even became a thing back in 2014. If you were interested in learning more about corruption in the video game media industry, just check out some of the cataloged incidents over on the DeepFreeze.it website.