If you were hoping to be able to create the iconic costumes from Mortal Kombat 9 in the gear customization feature in Mortal Kombat 11, either through unlockable parts or through DLC, NetherRealm Studios won’t even be accommodating such an option. That’s according to executive producer Ed Boon.

In an interview with Playboy that was published on April 22nd, 2019 a day before the release of Mortal Kombat 11, Ed Boon reiterated what art director Steve Beran told Polygon, mentioning that there won’t be any bikinis in the game and no scantily clad items reminiscent of Mortal Kombat 9.

“Well, it made a little more sense to have them dressed, especially if they’re going to be in combat. I don’t know how many people wear a bikini to a fight. And also with technology, especially with Mortal Kombat 11, we’re able to display our characters with more fidelity, detail and realism than we ever have, and that includes materials, like we can suddenly do something that really looks like leather, like steel, like cloth, like suede, like velvet, you know? All of those things we didn’t have the ability to do before, and so that lets us make much more interesting, realistic costumes, and so we really just kind of gravitated in that direction.”

This is such a bizarre response, especially given that nearly all the males have shirtless and pantsless options, at which point one must ask: how does that make sense?

Shao Kahn, Kotal Kahn, Baraka, and Kollector all have loincloth options going into battle, while Liu Kang, Jax, Geras, Johnny Cage, Kano, Kabal and even Kung Lao all have shirtless options. Why do the men get both shirtless and pantsless options or a mixture of them both but not the women? And how does it make more sense that the women all wear more clothes and armor than the men?

We all know the real reason is that NetherRealm has kowtowed to the SJW agenda, since as far as art direction consistency goes it doesn’t even make sense. 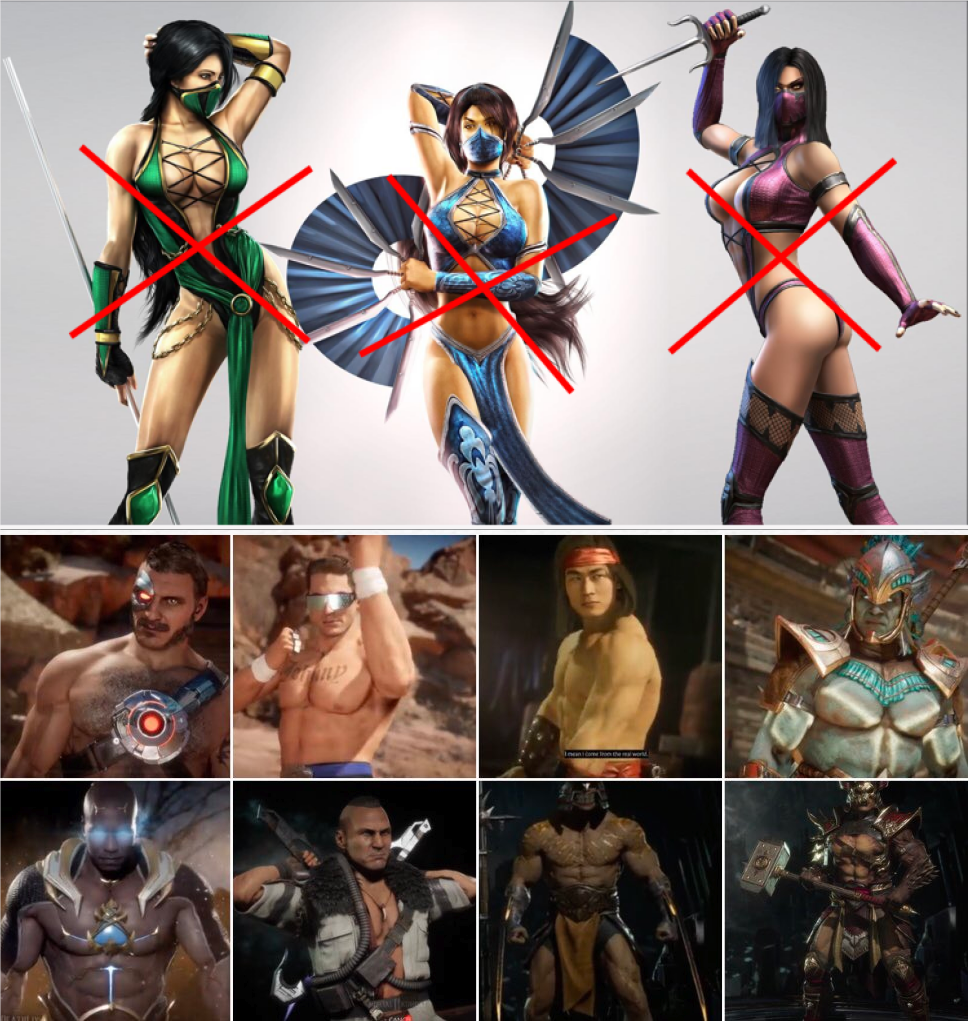 Boon mentions that he wishes he would have pulled back on the sexy outfits in Mortal Kombat 9 more and that if the game were made today it would have been scaled way back compared to what it was back in 2011, which was before SJWs took over the gaming industry. Boon pulls a Yohei Shimbori, who also mentioned that the developers went too far with the fan-service in Dead or Alive 5: Last Round and Dead or Alive Xtreme 3. Boon stated…

“ To be honest, I thought we probably went a bit too far with Mortal Kombat 9, and as the team lead—there were certainly members of the team who wanted to go in that direction, and to be honest, I had influence in dialing it back to where it is now compared to where it ended up being with Mortal Kombat 9. And as I look back, I kind of wish that I had had pulled it even further back. Now, granted, we are all clearly happy with how that game turned out, and it’s our second-highest-selling one, which is great, but in retrospect, I would have done it differently had we done it today.”

So he’s admitting that NetherRealm would self-censor Mortal Kombat 9 if it were made today, as if somehow indulging in overt violence is okay but indulging in overt female sexuality isn’t? This is made even more bizarre when you consider that even though ‘E’ rated games like Super Smash Bros. Ultimate and ‘Teen’ rated games like Injustice 2 were filled with more fan-service than Mortal Kombat 11. Well, more fan-service for the female characters. Mortal Kombat 11 is chock full of male characters depicted in various states of undress.

This also ties into the next question from Playboy, who asked that maybe there’s at least an option for gamers to indulge in the classic fan-service costumes using the gear system in Mortal Kombat 11? Boon offers a rotund answer that basically explains that there will be no custom gear that hearkens back to Mortal Kombat 9, and for that matter likely nothing from Mortal Kombat 3, Mortal Kombat Deadly Alliance or Mortal Kombat Deception, saying…

“It’s pretty much under control. I mean, at the end of the day, they’re going be selecting costumes that we designed. I’m sure some of them are more revealing than others, just because of the nature of different costume designs, but we did not go as far as we did with Mortal Kombat 9. And it’s interesting, too, because any time there is change with a game that has a really strong following, the initial human knee jerk reaction is—change is bad. This isn’t what I remembered, you know? So there’s a nostalgia thing that players are looking for, but at the same time, those are the same players who will say, “Oh, this is just more of the same. I’m bored,” if you don’t change anything, and so I’m personally a firm believer than when you make multiple sequels of a game, or probably any kind of format of entertainment, you need to offer something new, something different. [That] just makes it more interesting because when presented with something new, it’s always a better experience than just repeating the known.”

Gamers who petitioned for those gear pieces may as well pack it up. NetherRealm is done with being edgy or indulging in providing content for the core market demographic.

What’s more is that based on what’s been on display from the character customization so far, they didn’t even go as far as adding the kind of sexy gear that was in Mortal Kombat X, and that was already toned down greatly from Mortal Kombat 9.

Steve Beran mentioned that there wouldn’t be any bikinis or “scantily clad items”, and they’ve held true to that. The most we’ve seen as far as sex appeal from the female fighter side is some bustiers baring cleavage for Kitana and Skarlet, and a little bit of Jade. 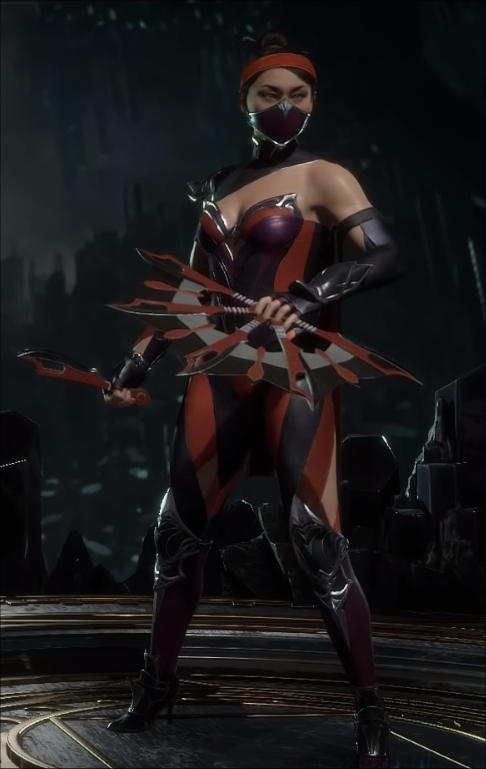 The problem is that all the women had their chests duly shrunk, all the jiggle physics removed, and almost all of their sex appeal removed to keep them from being lookers. I mean, even the she-monster Sheeva was made absolutely hideous and fat-faced, so that the fitness model physique she sported in every other previous Mortal Kombat entry was replaced with something that looked akin to Charles Barkley who got drunk, robbed of his clothes, and then decided to go to a party store and slap on centurion armor while trekking back home.

It was also pretty disgusting that even though Mortal Kombat 11’s story mode centered around time travel where the older versions of the classic characters were depicted in their “Klassic” costumes, the women didn’t get any of their “Klassic” outfits save for Sonya.

YouTuber Liana Kerzner has been criticizing NetherRealm Studios regularly for this double standard, outlining how they’re engaging in Benevolent Sexism to push their sociopolitical messaging through Mortal Kombat 11.

At this point, you may as well stick a fork in it because NetherRealm has already confirmed that anyone who doesn’t like Jax’s “woke” ending in the game isn’t a fan of Mortal Kombat, and now they’re actively trying to distance themselves from anyone who actually liked the over-the-top aspects of the older games both in terms of violence and sex appeal. Basically they’re fishing for that phantom audience using a lot of nefarious industry tactics, including microtransaction-inducing grinding and loot boxes in all but name.

If you were not convinced that NetherRealm Studio has gone to the SJW side, maybe hearing it firsthand from Ed Boon saying that you won’t even have the option to sex up the ladies through sartorial means. But maybe now everyone who was in denial will be able to see that the most politically incorrect game from the 1990s is now fishing to fit in with the politically correct ideologues of [current year].

(Thanks for the news tip Animatic, Weaponized Nerd Rage and Lyle)