Censorship and political correctness has been invading gaming for years now, even to the point where Mature rated or 18+ games prohibit players from engaging in the sort of content already present in the game. For instance, you can get banned from Rainbow Six: Siege for using strong language or slurs, even though the in-game characters use strong language. In the case of Mortal Kombat 11, NetherRealm prevents players from using certain kinds of words they’ve deemed “inappropriate” when making custom name variations for the characters.

Twitter user Orlando Jackson tweeted out his frustrations at being unable to use the word “Slave” in creating a custom variation in Mortal Kombat 11.

If you can’t see the screenshot, I was trying to set up a variation for the new character Geras and name it “Slave of Time,” but then the game tells me:

“Invalid variation name. The name must be 16 characters or less and cannot contain inappropriate language.”

For those saying the story is fake… pic.twitter.com/I0IqfJtW8I

The original link to the screenshot on the Xbox sharing page didn’t work, but Orlando provided a second screenshot he snapped where he attempted to use the phrase “Slave of Time” for his Geras variation. That’s when he was met with the following message. 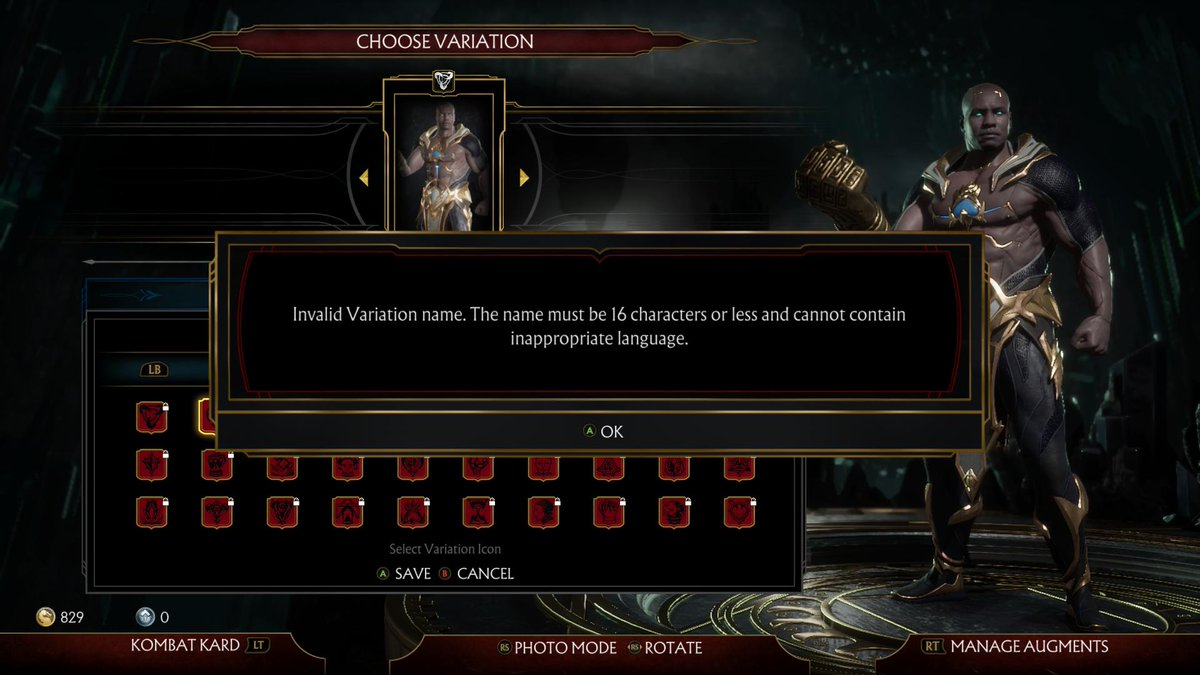 “Invalid Variation name. The name must be 16 characters or less and cannot contain inappropriate language.”

So now NetherRealm Studios is trying to protect grown adults from using language that they feel is inappropriate for grown adults to use… even innocuous words like “Slave”.

But this isn’t some random occurrence or an isolated incident.

Other people have been reporting that they, too, have had the game prevent them from using words like “kill”, “killer”, and “murder”, even though you kill and murder and mutilate people in the actual game!

Here’s a weird thing: MK11 considers “murder” an inappropriate word so it can’t be in the name of a character variation. Wut.

I tried to make my Sonya variation’s name shoot to kill, but apparently “kill” is an inappropriate name… in a game where you KILL PEOPLE??#mk11

Finally got “Kustomise” to work on MK11, tried to call a Johnny Cage variation “Douchebag” – can’t, too inappropriate. Joke.

Yes, in the eyes of NetherRealm Studios, a middle-finger is more appropriate than the “OK” hand-sign, but at the same time, using the words “Douchebag” for a custom name variation is also “inappropriate”.

The shenanigans don’t end there, though. Other users also reported having issues with other seemingly more innocuous names, such as creating a name variation using “Osh-Tekk King”.

Also, I was able to use “Netherrealm King” for a Liu Kang variant name so this is very odd.

As pointed out by the user, they could make “Osh-Tekk Queen” but not “Osh-Tekk King”.

[Update:] Some users pointed out that “Osh-Tekk King” is being prohibited because the filter ignores the space between “Tekk” and “King” and is interpreting the phrase as “KKK”.

This kind of gendered discrimination has been a running theme throughout Mortal Kombat 11, from Kabal showing displeasure for killing female combatants, to the males getting shirtless and pantsless options while the women are limited to just regal dresses and full-body suits covering them up from head-to-toe, because NetherRealm claimed they were being more “respectful” and “mature” with the female costume designs.

So far Steam users haven’t been complaining about the custom variation names being deemed inappropriate, but since they’re currently dealing with performance issues and lack of proper optimization, I’m guessing they have more serious problems to worry about than a custom name variation being deemed “inappropriate”.

It’s still amazing to me that a series that was built on political incorrectness is now going out of its way to be as politically correct as possible… even while aiming its content for people over the age of 18. It’s just another sign of the times.

(Thanks for the news tip Orlando Jackson)