After spending the last seven years championing censorship in video games and the removal of anything that appeals to straight gamers, Social Justice Warriors are now crying and whining on social media after they’ve been subject to the kind of corporate censorship they usually praise. This came about when trans activists tried hijacking the stage builder in Super Smash Bros. Ultimate in order to push their sociopolitical message across the Nintendo Network. However, Nintendo wasn’t having any of it, and decided to ban any kind of imagery that promoted a political message.

After the stage builder went live on April 17th, 2019 in Super Smash Bros. Ultimate, a number of people have been making all sorts of creative, lewd, and political themed stages in the game. Nintendo has been working overtime to remove the latter two types of stages, which includes anything dealing with Left or Right politics, including trans flags.

On April 19th, 2019 the Social Justice Warrior community was alerted to the censorship via user Warm Saffllina, who was incensed that Nintendo would remove a stage containing a trans flag that was called “Trans Rights Now”.

In what way is the trans flag and the title “trans rights now” inappropriate and/or harmful, @NintendoAmerica?

In an update to the original post, Safflina explained that they contacted customer support to find out more about why the trans flag was being censored from appearing in the online share feature for the Super Smash Bros. stage builder, and they were told that Nintendo was removing anything related to politics…

“I have reached out to customer support. The exact reason it was taken down was because it is considered a “political statement”. According to their records, my account was also suspended for 9 hours.

“The supervisor told me they personally don’t agree with the ruling, and recommended I and others contact corporate, or visit the Smash support forums and leave messages that the trans flag and messages of support for trans rights shouldn’t be prohibited.

“So, for now, BE ADVISED that the trans flags or messages in favor of trans rights and general supportiveness of trans people is capable of getting your account suspended or banned for being “political”.”

They also shared the customer support message that revealed that the account was temporarily suspended for violating Nintendo’s terms of service.

Here is a screenshot of the email I was initially sent. pic.twitter.com/3ysSWpn5V0

ResetEra was quick to run to throw up their shield of social justice chivalry for the Twitter user, defending the user and others for filling up the stage builder with trans propaganda, even though they were the same group responsible for getting Mr. Game & Watch censored in Super Smash Bros. Ultimate. 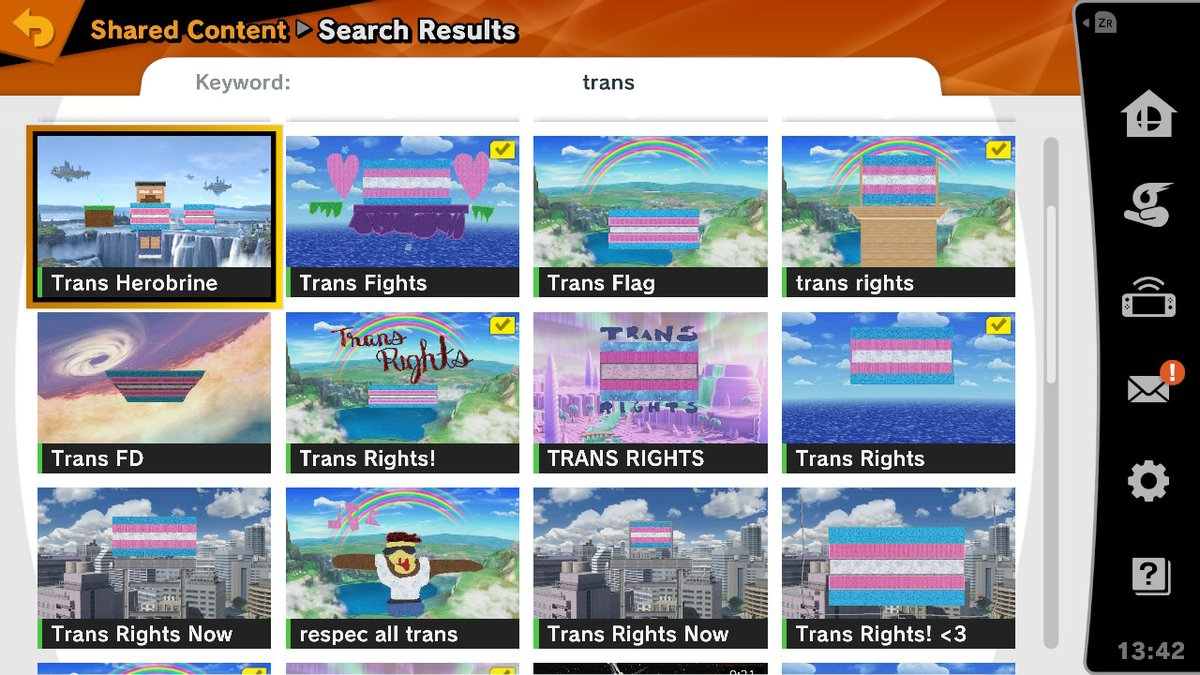 ResetEra tries to carefully tread through the topic knowing full well what it would mean if Nintendo did allow for political messages. In fact, a certain jviggy43 suggested that anything that wasn’t “hate speech” should be allowed.

Well by that token then a whole bunch of “Make America Great Again” stages with a red and white livery would be a-okay, right? Right?!

If you notice that anytime Google, Twitter, or Facebook bans, shadow-bans, blocks, or censors content from a Conservative, a Republican, or anyone on the Right, the SJWs are quick to justify it by saying “they’re a private corporation. They can do what they want” or the typical “Only the government can censor!”. Now that the shoe is on the other foot they’re not happy about it at all.

They now want to coerce Nintendo into adopting their politics, or else.

Twitter user Mombot was quick to point out that so far Nintendo has been abiding by their rules and banning any kind of political messaging in the stages being uploaded for Super Smash Bros. Ultimate.

They’re not only taking down stages related to this particular pet issue, but all stages with political messages.

This is true. We recently reported how Nintendo has been actively removing stages with lewd content, political messages, and other kinds of content that violated their policies. Overall, Nintendo doesn’t want people promoting dicks in their game.

This also goes back to what former Nintendo of America president, Reggie Fils-Aime, mentioned to the CBC during an interview at E3 in June of 2017, where he stated…

“Making political statements are for other people to do. We want people to smile and have fun when they play our games.”

Of course, anyone standing against the hivemind of ResetEra was promptly banned, even for innocuously pointing out that the forum and like-minded SJWs are doing nothing but stirring the outrage machine.

One thing that would be pretty funny is if Nintendo actually did kowtow to the SJW outcry and they allowed political messages to appear in stages in Super Smash Bros. Ultimate. The only thing is, SJWs would have no leg to stand on if a whole bunch of MAGA stages, pro-Trump imagery, and anti-SJW messages started popping up in Super Smash Bros. Ultimate.

(Thanks for the news tip Tim and anons)