Sony’s North American branch has finally confirmed the PS4 censorship policies that were instituted last year back when John Kodera was the president over the division. Kodera is being replaced by Jim Ryan, who used to oversee the PlayStation Europe division. Many games have been censored in light of the new policies, and it was only briefly confirmed to be in place late last year by Sony of Japan president, Atsushi Morita, who said it was to protect the kids and “match global standards”. Well, according to a recent report from the Wall Street Journal, Sony is currently censoring games on behalf of kids, and they have no plans on stopping.

In the Wall Street Journal article, the spokeswoman from Sony acknowledged the censorship but refused to detail any of the guidelines for the policy. The article states…

“A Sony spokeswoman confirmed the company has established its own guidelines “so that creators can offer well- balanced content on the platform” and gaming “does not inhibit the sound growth and development” of young people. She declined to say when these guidelines were introduced or to discuss them in detail.”

We do know for a fact that this guideline targets Japanese developers quite heavily, especially smaller niche titles.

We know that these policies affect games regardless of their age rating, as evident with Devil May Cry 5, which is rated ‘M’ for Mature.

We also know that the guidelines include restricting the amount of skin shown in hot springs or bathhouse sequences. Multiple Japanese titles have been censored or altered where the female characters are at a hot spring location. The censorship typically includes obscuring their chest area, midriffs, and pelvic regions with more steam or lights, which is what they had to do in Super Neptunia RPG or Yuragi-Sou No Yuuna-San.

We also know for a fact that any game containing interactive sequences where you touch or fondle the fictional characters via a mini-game or other control mechanism that sees the character being touched without explicitly giving their consent have either been banned for not removing such features, which is what happened with PQube’s localization of Omega Labyrinth Z, or the features have been removed before being released, which is what Marvelous Entertainment had to do for all the recent Senran Kagura games. This was also further confirmed for games like Criminal Girls, where the interactive Punishment system had to be completely removed from the upcoming game.

You’re probably wondering, “What about games that release and they’re already feature complete? What then?” Well, Sony forces the developers to release post-release patches, which is what happened with Mary Skelter 2, which featured a Purification system not unlike Criminal Girls’ Punishment system, which involved players touching and rubbing over the fictional characters to “purify” them. However, the post-release patch ended up breaking the game over in China and some gamers were threatening to sue Sony for making the product broken when the developers were forced at the last minute to remove the Purification mode.

As you can imagine, making drastic feature changes just before release or after release is very costly. This was originally touched upon by the Silverio Trinity developer, who had to censor his game to meet Sony’s policies. He also revealed that all of the certification forms are in English, and that there’s an NDA from speaking about the specifics of the forms.

According to the Wall Street Journal article, an executive at a smaller developer outfit also corroborated what was already mentioned months ago, stating that for smaller developers it’s very costly…

“You don’t know what they will say until you complete the work and submit it for review. And if they are not happy, even if they allowed the same degree of sexuality a few days before, we need to take it back and ask our staff to make adjustments. That’s very costly.”

This isn’t just costly in a financial sense, it’s also very costly in an emotional sense as well.

In fact, the toll from Sony’s censorship policies was so excruciating on Honey Parade Games’ Kenichirō Takaki that he decided to step down from his role at Marvelous Entertainment. For those of you who don’t know, Marvelous is the publisher of the Senran Kagura games. One of the more quoted lines from the interview acknowledging his departure from Marvelous was that he said “My inside feels like having a string cut off.”

This came after multiple reports of tumult taking place behind the scenes while he attempted to censor and completely overhaul parts of the upcoming Senran Kagura 7EVEN, which included extricating the Intimacy Mode, which had been a staple in all of the Senran Kagura games up to that point.

Now if you’re thinking that Microsoft is swooping in to save the day; picking up all of these niche Japanese titles to win over the Eastern market, you thought wrong. When the Wall Street Journal reached for comment about possibly censoring sexual content in games, Microsoft declined to comment. This isn’t surprising given their recent track record, where they’ve attached games like Gears 5 to Facebook’s social engineering program known as “Women In Gaming”, and overhauled the Xbox Avatar system to align more with the sociopolitical sensibilities of the San Francisco crowd.

Nintendo, however, confirmed to the Wall Street Journal that they won’t be censoring or regulating third-party games. In the article they explain…

“Nintendo said it doesn’t regulate sexual content beyond requiring game makers to obtain a rating from national bodies. It said its game systems allow parents to restrict content based on the rating. Microsoft declined to comment.”

This isn’t surprising given that we’ve seen a number of sexy and adult-themed games releasing on the Nintendo Switch without any or very little censorship. One of the most talked about cases was Nora, Princess, and Stray Cat, where the PS4 version of the game was heavily censored with the “mysterious lights” but the Switch version wasn’t. 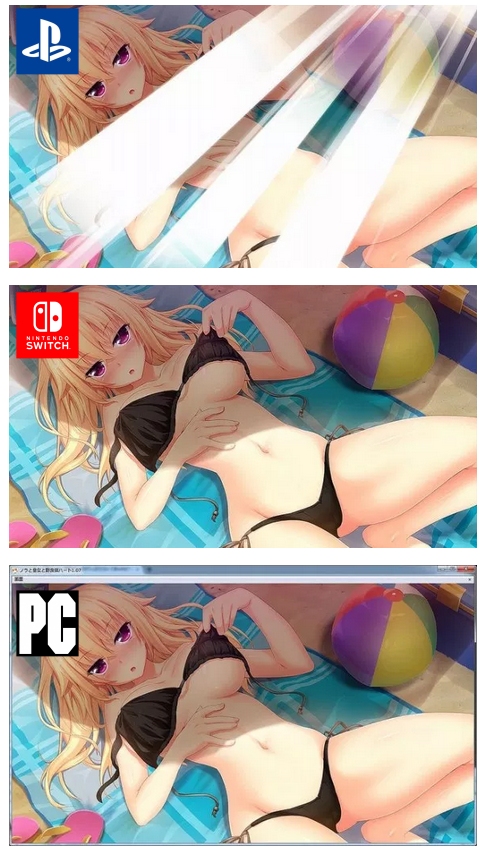 So far Nintendo has kept to their word, only enforcing developers to abide by the regional regulatory rules setup by the ratings boards. For instance, the re-release of the 1995 Sega Saturn game, Super Real Mahjong PV, had a nipple slip in the Nintendo Switch version that didn’t comply with Japan’s CERO system. So CERO and Nintendo informed the developer Mighty Craft about the issue and they proceeded to fix it.

So long as developers abide by the rules of the ESRB, PEGI, or CERO, Nintendo won’t interfere.

Sony, on the other hand, will interfere and is not afraid to ban games, even if they don’t contain sex and even if they do abide by the regional ratings boards, such as Richard LaRuina’s Super Seducer, which Sony banned last year from appearing on the PS4 following complaints from feminists.

The Wall Street Journal explained that the enforcement of these policies beyond the ratings boards were due to two things: #MeToo and livestreaming. The article stated…

“Two factors last year combined to turn that unease into action, these Sony officials say. One was the rise of the #MeToo movement in the U.S., which pointed to the dangers of being associated with content that some might see as demeaning to women. The second was the emergence of channels on sites like YouTube and Amazon Inc.’s Twitch where gamers play in front of a camera and are watched by fans online. That means games meeting Japan’s laxer standards can get world-wide exposure.”

So now even if your game doesn’t contain elements consisting of non-consensual interactivity with female characters, even if the game itself is viewed by certain groups as “demeaning” toward women, it could result it in having to be censored or possibly banned.

Some gamers are worried about how this will affect the PS5, which has been rumored for release sometime after 2019. Others believe that since this issue only affects niche games and not mainstream AAA Western titles like The Last of Us 2, most casual gamers won’t care so long as they can play the next big gory, violent blockbuster, like Mortal Kombat 11, which is embroiled in its own controversy for having gratuitously over-the-top violence but the developers refused to allow gamers to select the classic outfits for the female characters because they said they wanted the game to be more “mature” and “respectful”.

(Thanks for the news tip AntiSnoyCensorship)