Lizardcube and Guard Crush Games’ take on Sega’s unforgettable beat-’em-up franchise, Streets of Rage, is one of the most highly anticipated projects in development at the moment. The sequel to Streets of Rage 3 is 25 years late to the party, but most fans of the original trilogy aren’t complaining too much since there are no good games in development by AAA studios as far as the eye can see, so why not indulge in a new-school take on a retro franchise?

Well, to help gear gamers up for the eventual release of Streets of Rage 4, a new 42 second teaser trailer dropped showcasing some of the new locations that they’ll be visiting in the grungy beat’em-up, including a sewer stage and the urban ruins of a subway graveyard, which is a unique backdrop for a beat-’em-up. Check it out below, courtesy of Gamespot.

Majority of the trailer consists of Axel and Blaze blasting through the baddies using their special moves. But we also get to see some of the air-juggle tag-team maneuvers, where Axel or Blaze will launch an enemy into the air and then the other player will finish the air juggle combo to unleash additional damage onto enemies.

It was also possible to do some light juggling in the previous games, but it wasn’t always easy and you really had to time your moves right since there was no falling delay and there was faster fall-time acceleration. However, with enemies floating in the air a little longer this time around, it means that it gives players ample opportunity to jump-kick their foes out of the air with Blaze, which means you’ll get to see those upskirt shots often. 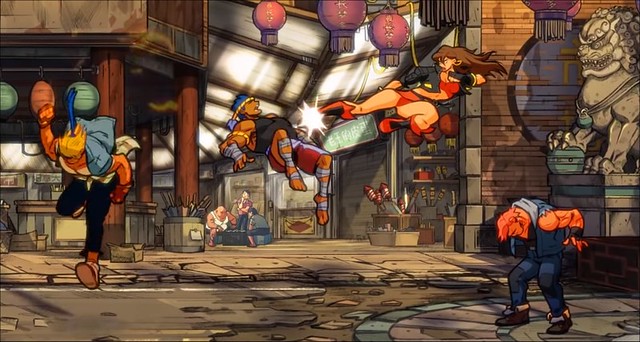 Also, I have to give it to Lizardcube. They made sure the women – whether good or bad – look smoking hot. Tight pants, sports bras, and high heels? Yes, please.

This is the kind of game that respects the longstanding traditions of Boner Culture.

I still haven’t seen enough to determine if this is going to be as fun as the Streets of Rage Remake games, but visually the art is on point (although I’m not the biggest fan of Axel’s power gut).

You can look for Streets of Rage 4 to launch at some point in the future. For more info be sure to visit the official website