Super Neptunia RPG Will Be Censored On PS4, Uncensored On Switch For Summer Release

Idea Factory International confirmed today that Super Neptunia RPG will launch for the Nintendo Switch and on the PlayStation 4 in the West this summer. The gameplay will remain untouched, but two CG images will be censored on the PS4 version. The Switch version will remain uncensored.

The news comes courtesy of a tweet that was published on April 11th, 2019 by the official Idea Factory International account. The company confirmed the censorship for the PS4 version during the announcement that the game was heading to North America and Europe this summer.

Super Neptunia™ RPG is coming to the PS4™ and Nintendo Switch™ this Summer!

The PS4 release will have two slightly modified CGs. Gameplay for all platforms has not been changed from the original Japanese release.

This is actually not new news.

We did know before that the Japanese version of Super Neptunia RPG (known as Brave Neptunia RPG in the East) was also censored on the PlayStation 4. This was discovered back in December of 2018 via Japanese playthroughs that revealed that two CG images were indeed censored compared to the promotional art.

Some people attempted to defend the censorship saying that it wasn’t supposed to be like the promotional art or that maybe there were aspect ratio problems. However, Idea Factory has now confirmed that the censorship is indeed in play on the PS4 version of the game, as indicated in the image below. 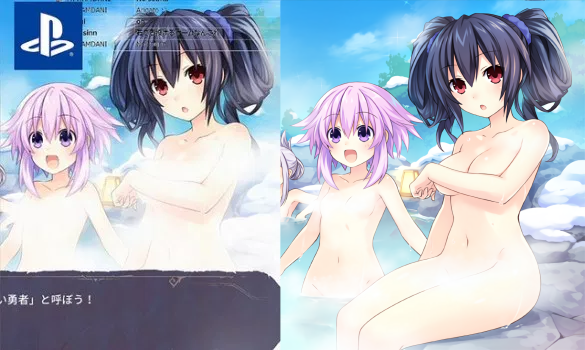 Sales for Super Neptunia RPG were not that great on the PS4. The game opened with a 74% sales drop compared to the last Four Goddesses Online: Cyberdimension Neptune, which came out two years ago. Plenty of Japanese gamers didn’t like the game, but it wasn’t for the censorship; many hated the graphics, the animations, and the simplicity of the combat, giving it rather poor scores on user review sites.

Nevertheless, Idea Factory International seems to be attempting to mitigate the backlash from Sony’s PS4 censorship policies by indirectly letting people know that if they want the uncensored version of the game, get the Switch version.

Either way, you can look for Super Neptunia RPG to arrive on the PS4 and the Nintendo Switch in North America and Europe starting this summer. For more information about the game be sure to visit the official website.

(Thanks for the news tip AntiSnoyCensorship)