After gamers discovered a trans rights flag Easter Egg in A Hat In Time’s latest DLC, it has caused a lot of unrest in the community, which has resulted in thread deletions, review removals, and users being banned.

Gears For Breakfast never responded to my initial inquiry about why they chose to include a trans rights flag in the latest DLC expansion for the family-friendly kid’s game, A Hat In Time, but their latest antics seem to speak volumes for how they feel about the pushback that the community is giving them over the inclusion of the Easter Egg. For reference, YouTuber icze4r put up a video showing gamers how to reach the flag and where it appears in the game. You can check out the video below.

It all started with a forum thread asking why the trans rights flag was included in the DLC pack. On May 11th, 2019 some Twitter users caught wind of the thread and broadcast it across social media, where thousands of people interacted with the tweet, which then caused them to flood the forum in defense of the flag. This resulted in people angrily pushing back at the idea that including the trans rights flag was the right thing to do for a kids game, claiming that it turned an inherently apolitical game into entertainment propaganda. The forums were on fire for a while, just until the Steam moderators came in and began deleting all the threads.

If you attempt to visit the deleted threads they redirect to the main Steam forums for A Hat In Time.

Ethnic Weeb’s thread discussing his refund of the game was deleted.

A person #KeepRandomCrits’ thread praising Gears for Breakfast for the trans flag was deleted.

Vis’ thread asking for peace and calm was locked.

Denyal’s thread announcing that they refunded the DLC was also locked.

Deathraven13 who originally requested to have the trans flag removed, not only had his post locked but he was also banned from the forums.

There are still some threads that haven’t been deleted or locked, yet. Daragoth’s thread asking for people to stop fighting is still live, along with EvilForces’ thread criticizing the forums for being steeped in politics. That Guy’s thread recounting the entire controversy in a thread titled “The Controversy” is still live, along with bamboni’s thread exclaiming “trans rights are cool”. Another user posted a screenshot of receiving a warning message for calling out “transphobes” in a thread instructing users on how to remove the flag from the game. 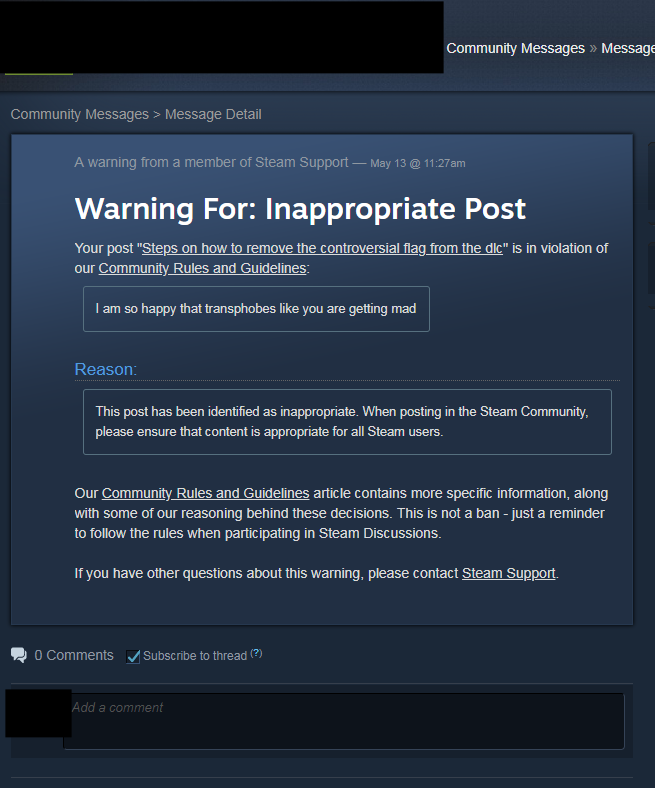 Either some of these threads were missed or selective banning is being enforced.

That’s not to mention that all of the deletions, bans, and locks are what was gathered before they were hit. That doesn’t include the threads, users, and content that has been or is being banned that we don’t know about.

Some user reviews are being removed for calling out the trans rights flag as “propaganda”.

The banning of users, removal of reviews, locking of threads, and deletion of certain topics is a bad look in response to users who reacted negatively to the inclusion of a hot button sociopolitical topic in a kid’s game.

The real story here isn’t just the bans or the blocking of criticism for the inclusion of the trans flag, it’s the fact that the censorship was done in such a way as to give the appearance that there was no pushback; that the community wasn’t angry about the politicization of a kid’s game; that no one was speaking up or actively encouraging refunding the game due to the inclusion of the flag in A Hat In Time.

You’ll note that influencers are spreading around the message that there is no outrage, there is no pushback, and there is nothing going on because it’s all clean in the community, and no one is talking about it, so it’s not a problem.

You are, all of you, pussies. https://t.co/cjxPoZqJ1W

This here is typically how situations like this get buried. People assume, prima facie, that all is being done in good faith on the developer’s behalf, when in reality the community is silently crying out under the muffled gag of censorship.

It’s worse yet when influencers help the developers bury dissent in order to save face among the status quo.

Unfortunately, this happens almost every single time a developer decides to get overtly political with their game. We saw it happen straight away after the announcement of Vampire: The Masquerade – Bloodlines 2, where anyone criticizing the game’s politics were silenced and banned, and we also saw it happen with Mortal Kombat 11 where people criticizing the de-sexualization of the female characters in the game were also silenced and banned.

In this case, we’re seeing that those criticizing Gears for Breakfast for including the trans rights flag in A Hat In Time are also being silenced, their threads deleted or locked, and some users banned.

I reached out to Gears For Breakfast about the issue originally as it began to unfold, but they never responded to the inquiry.

(Thanks for the news tip Ace and Ebicentre)